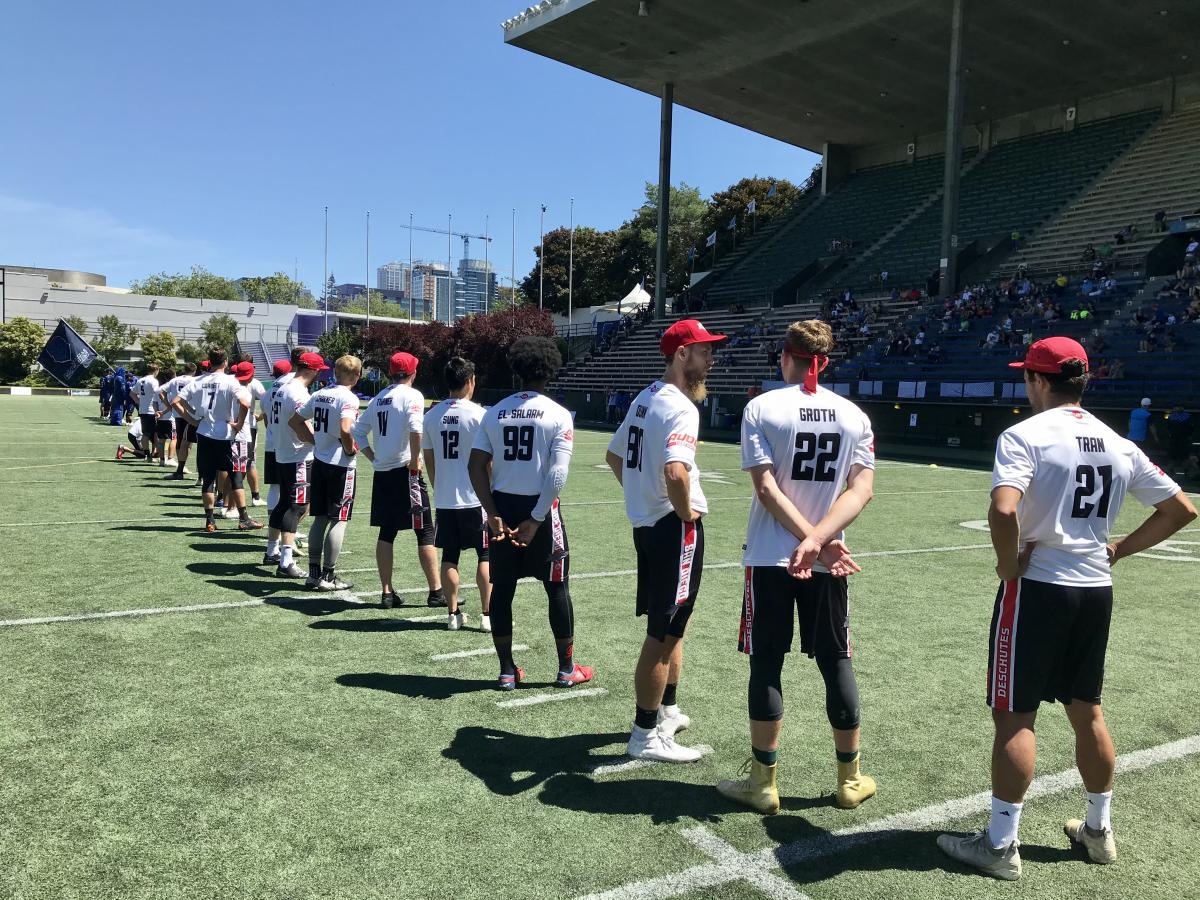 June 20, 2021 --- The Growlers traveled from San Jose to Seattle on Saturday and enjoyed a recovery day, but were met with swirling wind conditions when they arrived at Memorial Stadium on Sunday.

Zac Schakner fully embraced Father’s Day with a layout block to start the game, but the Cascades held on for the score. After a long back and forth point, Jordan Queckboerner evened the count for the Growlers. After a Seattle hold, Travis Dunn found Wes Groth for the equalizer, 2-2. The Cascades looked more comfortable and confident with the changing winds and went on to hold and break. Jonathan Helton got San Diego back on track by assisting to Nate Pettyjohn, but another Seattle hold and a failed Growlers buzzer beater brought the score to 5-3.

Seattle broke to start the second quarter, but Will Turner connected with Kyle Rubin on offense, and Michael Tran dished to Queckboerner to get the break back, 6-5. The Cascades held and notched a break of their own just for good measure. Hunter Corbett hucked to Travis Dunn for a poster worthy goal, but the Cascades were solid and held 9-6. After a Growlers hold and Reggie Sung’s massive layout catch to save possession, a timeout was called.  However, a turnover led to a Cascades goal and with 2 seconds left in the quarter, 10-7.

Each team traded scores, then a marathon point ensued with several turnovers draining more than half the clock, and Seattle ultimately held for 12-8. The Growlers needed to bounce back and did so with a Dunn to Tran hold, then a Khalif El-Salaam assist to Sung for the break, 12-10.  Seattle was up for the challenge and somehow scored at the buzzer to increase their lead to 13-10.

Tim Okita and Nate Pettyjohn worked the college connection on the Growlers first two offensive points, sandwiched in by a Seattle hold, 14-12. San Diego had a chance to break, but was unable to secure the catch, and once again the Cascades held firm, 15-12. After a turnover on offense, Tran came up with a huge interception in the end zone, which led to a timeout and eventual El-Salaam dish to Dunn for the hold with 4 min remaining. After a block from Max Hume, Turner threw a late-stall scoober to Corbett, 15-14 with 3 min left. The Growlers officially had the momentum after a Queckboerner block and the last timeout was called with 1:16 on the clock. A Tran to Turner goal tied the score at 15 with 32 seconds, and a Seattle turnover gave San Diego a chance at the buzzer, but the attempt came up just short.

The Growlers were confident and energetic to start overtime, but the Cascades capitalized on a turnover to break and take the early lead 16-15. San Diego struck back when Turner assisted to Helton for the equalizer. Seattle turned the disc over and after several throws, Queckboerner came out of nowhere to collect a floaty pass for the break and the first Growlers lead, 17-16!  On the next point, rookie Stefan Samu intercepted a deep throw and caught the assist from El-Salaam for bookends, 18-16, with 30 seconds left. Zac Schakner recorded a block to thwart any possible Seattle comeback and secured the overtime victory!

On a short week, the Growlers will host the Dallas Roughnecks at 7 pm on Saturday, June 26 at Torrey Pines HS.  This AUDL Game of the Week is the much-anticipated rematch from the 2019 Championship Weekend Semi-Finals meeting and is must see AUDL.TV!