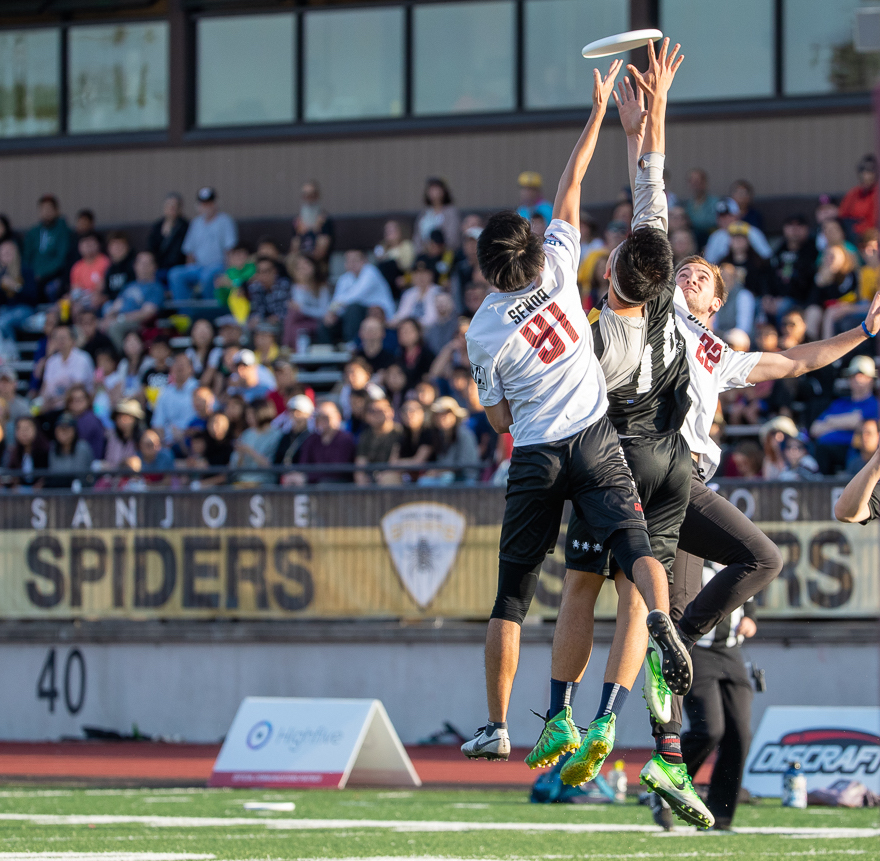 The San Diego Growlers traveled north to play the San Jose Spiders in the last regular season game of 2019.  Each team traded offensive holds, then Scott Radlauer’s block yielded a Sam Fontaine to Dave Ritchie break score.  On the next possession, Bailey Wu’s layout block led to an Eric Hytönen assist to Max Hume.  Two more breaks scored by Aidan Hall and Ritchie, and the Growlers surged ahead 6-1.  The Spiders stopped the bleeding with a couple of holds, but another Radlauer block and assist to Marcel Osborne resulted in the last break and score of the first quarter, 8-3.

The Spiders began to trade with the Growlers and capitalized on a break opportunity to make it 9-6.  Wes Groth, Sean Ham, Travis Dunn, and Ryo Senda were a tough group to guard downfield, and the teams traded several more scores until San Diego secured a break, 14-9.  San Jose kept it close with a hold and a break right before halftime, 14-11.

Coming out strong, San Diego traded scores then broke after a Radlauer block, 17-12.  Several more holds, then another Radlauer block led to Fontaine dish to Hall, 20-14.  Each team tallied one more hold before the end of the quarter.

Keeping the defensive pressure on, Will Turner soared through the air for a patented layout block, which led to a break, 22-15.  The teams traded holds for much of the quarter with San Diego firmly in command. The Growlers were victorious, 26-20, and finished with a 10-2 regular season record.

Wes Groth led the Growlers with a +11 performance (5 assists, 5 goals, 1 defensive block) on offense and Scott Radlauer was a dominant defensive force with a +7 game (2 assists and 7 defensive blocks).  San Diego sits atop the AUDL West Division at 10-2 and will host the Los Angeles Aviators on Saturday, July 20 at Mission Bay HS.  This winner-take-all playoff game will decide who earns a final 4 spot at Championship Weekend on Aug 10-11!