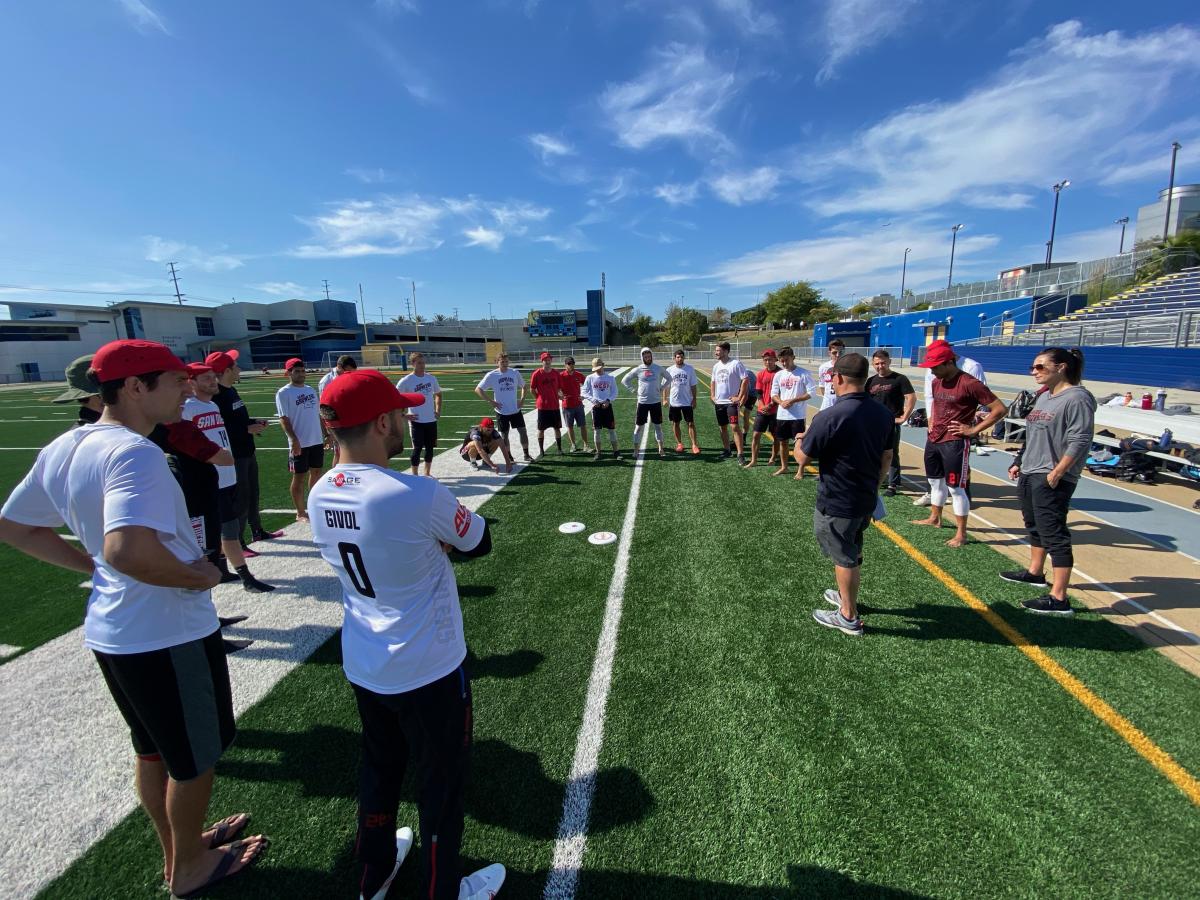 June 5, 2019 --- The San Diego Growlers traveled north to battle the Los Angeles Aviators in a SoCal rivalry game to start the 2021 American Ultimate Disc League (AUDL) season. The last time these teams faced each other was in the 2019 West Division Playoff, a game the Growlers won to clinch their first ever AUDL Championship Weekend berth.

With swirly wind conditions at Southwest College, LA received the opening pull and worked the disc downfield with handler give and go action, and former Growler Sam Fontaine collected the first goal. The Aviators secured a break to establish an early 2-0 lead, but San Diego rookie Nate Pettyjohn’s perfect backhand throw connected with Jesse Cohen in the endzone. On the ensuing possession, former Aviator Zac Schakner laid out for the defensive block and eventually assisted to Hunter Corbett to tie the game, 2-2. After several offensive holds by each squad, LA ended the first quarter with a slim lead, 5-4.

Tim Okita caught the first goal of the second quarter courtesy of Jonathan Helton to tie the game at 5. After a Corbett block and a timeout to substitute in the offense, Steven Milardovich found Lior Givol to take the lead. Each team scored on their next two possessions before a Milardovich block led to a Greg Cohen assist to Pettyjohn, 9-7. Both LA and SD held serve, and the Growlers had a last second chance to score at the buzzer before the disc was intercepted, 10-8.

Coming out of halftime, the Aviators scored, but the Growlers countered with a nice diving goal by Givol after a deflection, 11-9. On the next point, Greg Cohen registered a block then threw it deep for Corbett who saved the disc from going out of bounds with a huge layout catch, then calmly dished to rookie Jordan Queckboerner for the break, 12-9. LA stopped the bleeding with a hold, San Diego struck back, and the Aviators answered with a hold and a break, 13-12. Dom Leggio righted the ship with an assist to Kyle Rubin and the quarter closed after an Aviators score, 14-13.

Michael Tran began the fourth quarter with an assist to Givol, and after a couple LA holds, Okita dished to Travis Dunn to put the Growler ahead by two scores, 17-15. On the next point, Greg Cohen chased after a long huck and his massive layout block prevented a sure score. A timeout was called to get the offense back on the field and it paid off when Dunn converted to Helton for a critical break and an 18-15 lead with 5:33 remaining. After each team traded scores, another minute elapsed and time was running short. The last possession of the game had multiple turnovers and a couple injury stoppages, but eventually the Growlers ran out the clock for a 19-16 victory!

San Diego will host the Los Angeles Aviators on Sunday, June 13 at Mission Bay HS at noon. This is the Growlers home opener and yet another SoCal rivalry game that is sure to be drama filled and action packed (click here for tickets)!