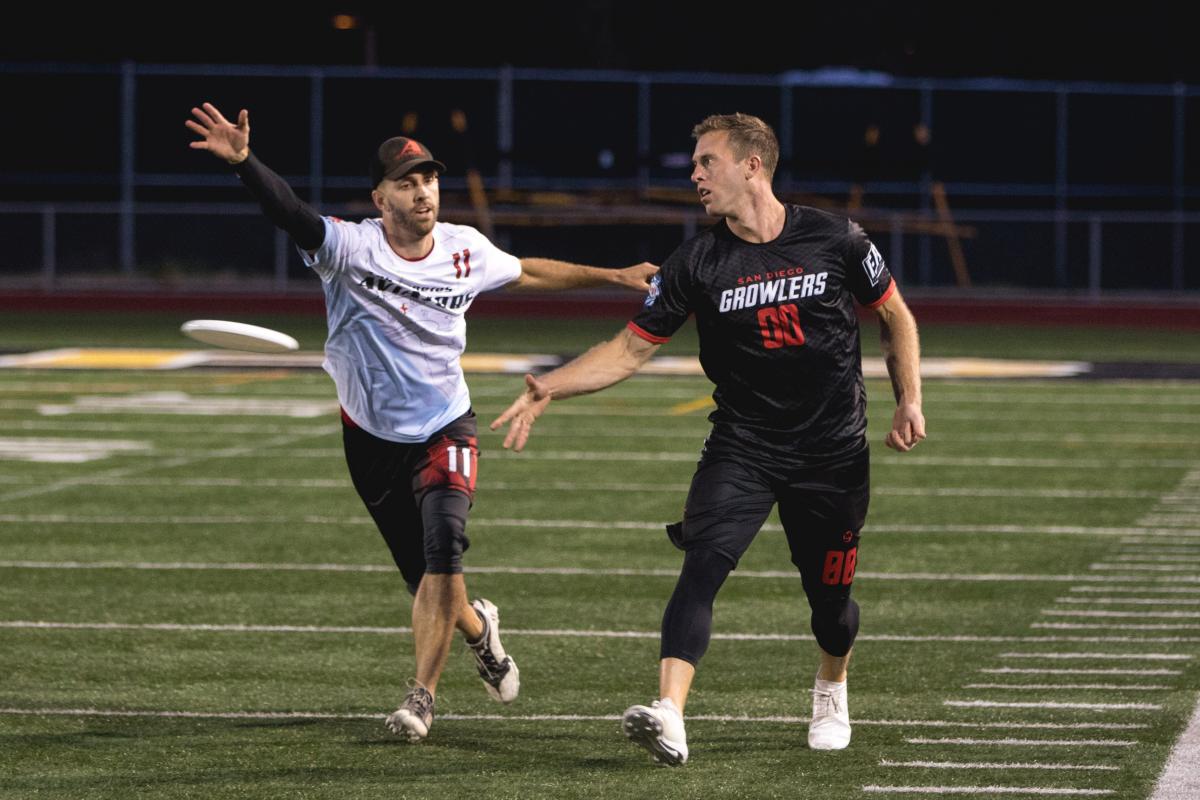 In the opening game of a SoCal rivalry double-header, the San Diego Wolfpack earned their first West Coast Women’s Pro Series victory over the Los Angeles 99s quite convincingly, 21-13.  Afterward, the first place San Diego Growlers attempted to pull off the series sweep of the second place Los Angeles Aviators in front of a great Mission Bay High School crowd.

The Aviators stared the offensive huckfest with a score, then Travis Dunn answered with a long flick to fellow All-Star Jonathan Helton.  More deep throws and holds from both teams until Mark Slader’s defensive block led to a timeout and eventually Ryo Senda scored for the Growler break, 4-3.   San Diego broke on the next point when Kyle Rubin intercepted an errant pass and caught the bookend assist from Steven Milardovich. LA stopped the bleeding with a hold and a prevented the Growlers from scoring at the end of the first quarter, 5-4.

The SoCal rivals each held to begin the second quarter, then the Growlers called timeout after an Aviators turnover, which led to Tim Okita dishing to Wes Groth for another break, 8-5. LA and SD held, and despite a golden opportunity for a Growlers break on the next point, the Aviators scored and converted on their first break to inch within 1 score, 9-8.  Both SD and LA committed turnovers on the next possession, but Helton eventually bent a backhand to Dunn for the goal with 3 seconds remaining, 10-8.

San Diego enjoyed a break courtesy of a Marcel Osborne goal coming out of halftime, but LA fought back with a hold and a break of their own 11-10.  The teams traded two holds each, then the Aviators stole the momentum with two consecutive breaks just before the end of the quarter to take the lead 14-13.

The Growlers tied the game at 14s to start the fourth quarter, but the Aviators countered to take back the lead.  The rivals traded long offensive holds again, and on the next possession, Helton completed a “greatest” (jumped from in-bounds, caught the disc, and threw it before landing out) to Jake Gutkowski to tie the game at 16s.  LA counter-punched with an offensive score and a break with 3:11 remaining, but San Diego would not go away and patiently scored with 2 minutes left, down 18-17.  Good defensive pressure forced a desperation turnover by the Aviators, and the Growlers called their final timeout with 55 seconds left and a full-field to tie the game.  San Diego moved the disc past midfield and was threatening with 20 seconds on the scoreboard, but LA somehow came up with a well-timed poach block right after the next throw was released to seal their first win against SD.