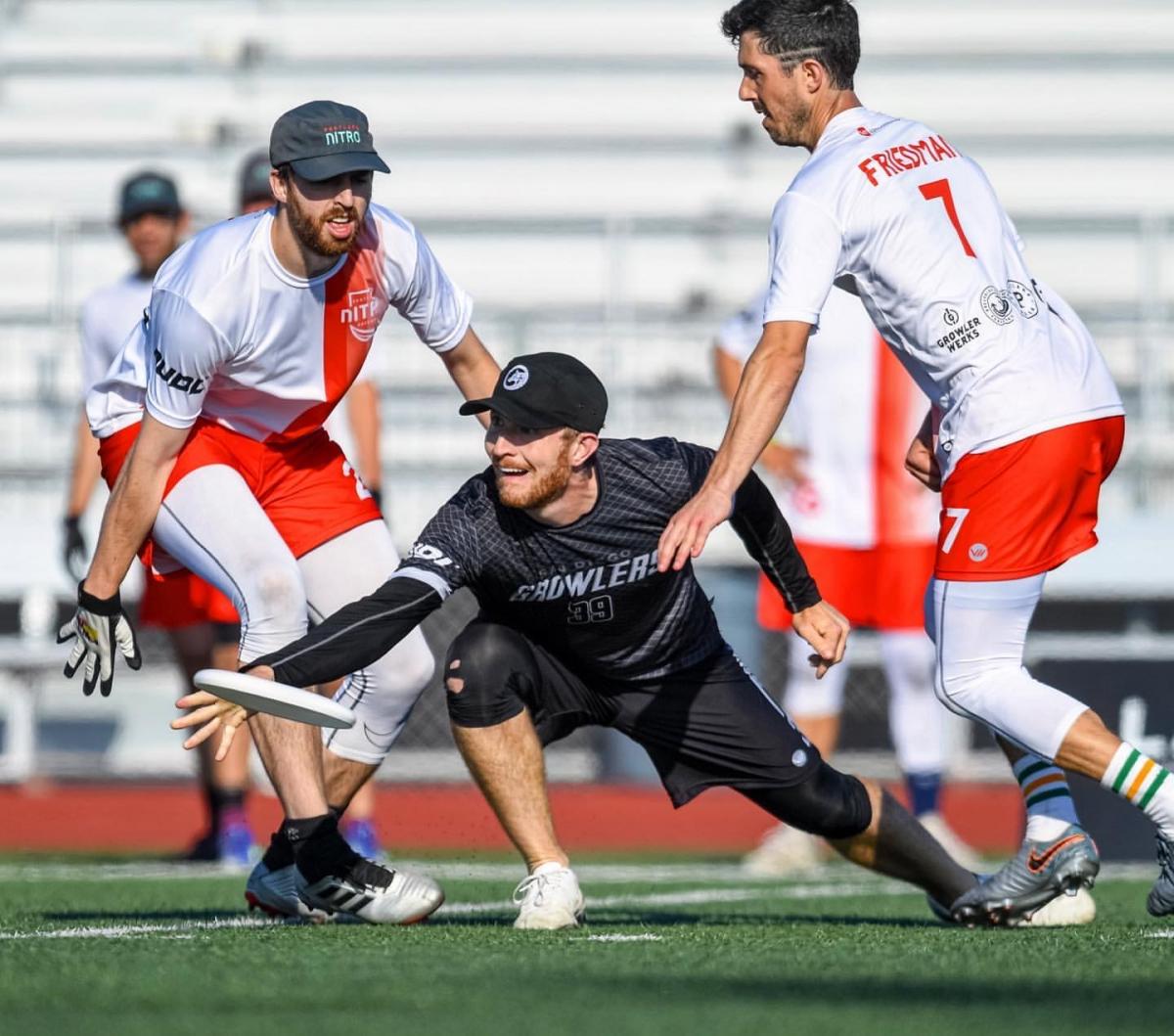 The San Diego Growlers hosted the expansion Portland Nitro for the first time ever on June 11 at Mission Bay HS. With a 17-16 loss to LA the day before, Portland was desperate for a win to finish their SoCal road trip and keep their playoff hopes alive.

The Nitro started on offense, but the Growlers quickly set the defensive tone with Steven Milardovich’s diving block, which led to Chris Mazur eventually finding Ben Levinsky for the break score. Portland held, then followed up with a break of their own, but San Diego countered to tie the game at 2-2. The teams traded three downwind offensive holds apiece, until Reggie Sung’s foot block resulted in Michael Tran assisting to Levinsky for the upwind break and the Growlers led 6-5.

San Diego was patient on offense to start the second quarter with Goose Helton dishing to Jesse Cohen for the hold, 7-5. Portland struck back, then broke to tie the game after a big block by former Growler Scott Radlauer. The teams traded multiple upwind holds before Jordan Queckboerner blocked a deep throw, then ran the length of the field to receive a Tyler Bacon backhand huck for the 11-9 advantage. The Nitro scored downwind and the Growlers came up empty before the buzzer to take a one point lead into halftime, 11-10.

After each team committed a turnover to start the second half, Portland eventually held on offense downwind. After a Growlers hold, Trevor Purdy intercepted the disc and San Diego capitalized with a break after a timeout, 13-11. Not to be outdone, the Nitro scored on offense and also doubled-down with a break to tie the game. The next point featured multiple throwaways and a timeout from each side before the Growlers prevailed with a Casey Wu goal. With a little momentum now, Trevor Purdy recorded another block, ran the field to collect an upwind Mazur deep throw, then caught the bookend break goal. Portland was able to hold on offense near the end of the quarter but still trailed 15-14.

The final frame saw Helton throw deep to Travis Dunn, who caught the disc on a second effort for the downwind goal. After a Portland throwaway, San Diego patiently advanced the disc upwind until Bryce Lozinksi assisted to Sung for the break and the largest lead of the game 17-14. The Growlers had another golden opportunity to put the game away, but Portland eventually held after a long point, and San Diego did the same. The teams traded again until the Nitro held upwind, then secured the block and broke downwind, trailing 19-18 with 2:17 remaining. A Growlers drop gave the Nitro a chance to tie, but Helton blocked the next throw, and San Diego bled the clock down to 20 seconds as Dunn connected with Helton to seal the game and the 20-18 victory!

The Growlers were led by Goose Helton’s +7 performance, with 5 assists, 4 goals, 1 block. Trevor Purdy had a big game with 1 goal and 4 blocks, while Chris Mazur added 4 assists and Jesse Cohen scored 4 goals. With their fourth win in a row, San Diego (4-1) moves into second place in the West Division and will travel to LA to battle the Aviators (3-3) on Sat, June 18.