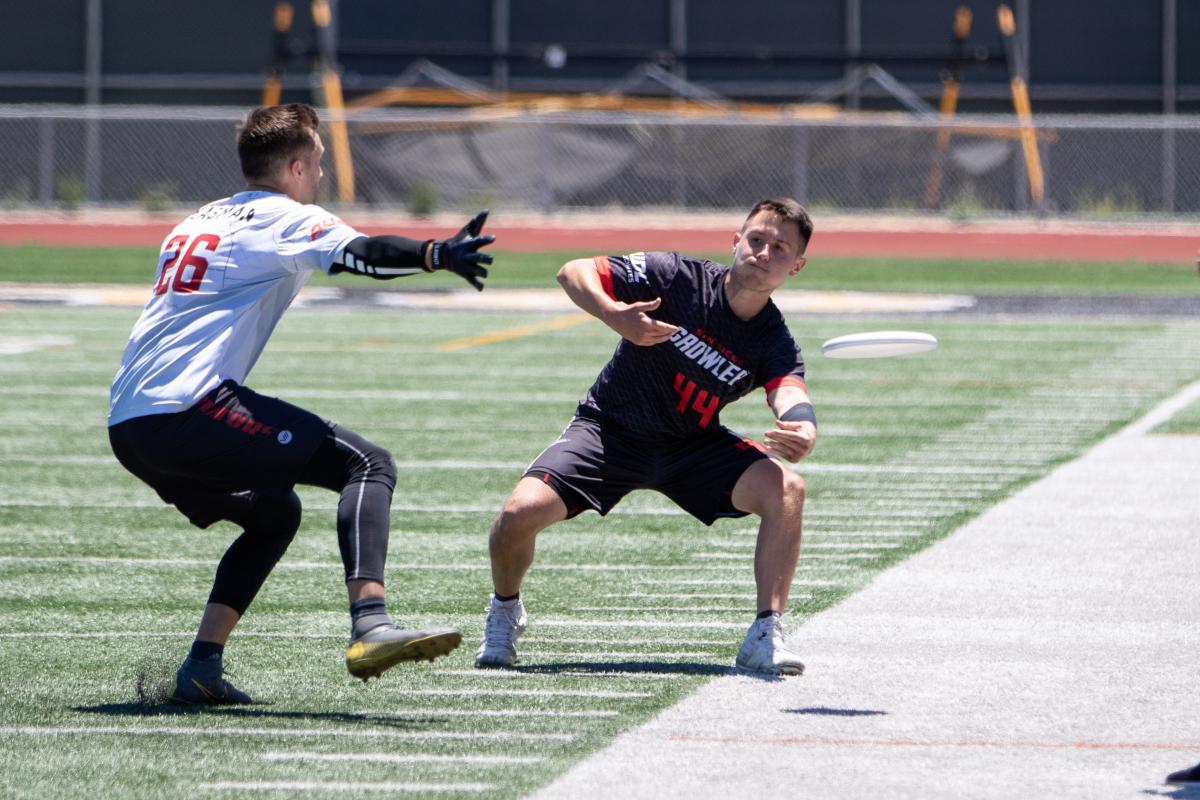 August 7, 2021 --- Coming off a home victory versus Seattle the previous week, the San Diego Growlers needed one more win to clinch an AUDL West Division playoff berth as they hosted the Los Angeles Aviators.

San Diego started the game with a pair of holds before Zac Schakner laid out for the block, leading to a Khalif El-Salaam assist to Michael Huang for their first break.  Not to be outdone, Steven Milardovich followed up with a block, and Paul Lally found Wes Groth for another break score, 4-1. The Aviators were able to cut the deficit in half with a hold and prevented the Growlers from scoring at the buzzer.

Los Angeles battled for two minutes for the long hold, but 2017 AUDL MVP Jonathan Nethercutt fired an inside out bullet to Nate Pettyjohn for the answer, 5-3.  The Aviators squandered a break chance after calling timeout and turning it over, and Ethan Li eventually secured the goal for the Growlers hold.  Both offenses found a rhythm and would not yield a break, with Trevor Purdy dishing to Pettyjohn for his 5th goal of the quarter right before halftime, 12-10.

The third quarter began with an El-Salaam interception and Li connected with Nate Bridges for a break, 13-10.  Nolan Schmalenberger provided a hand block on the next point and threw to Joey Huppert for the break score, 14-10.  LA held, and despite a SD turnover, Hunter Corbett flew for the block and Nethercutt assisted to Milardovich. After holds from each team, highlighted by a Pettyjohn diving catch, El-Salaam found Purdy to take advantage of a LA dropped disc, 17-12. The Aviators punched in a goal, and despite a Lally throwaway, he earned the disc back with a layout block and assisted to Corbett. LA held and prevented a SD score but found themselves down 18-14.

The Growlers knew they needed a strong finish and applied great defensive pressure, which resulted in a Stefan Samu break score, 19-14. The teams traded goals, then another Li interception led to an El-Salaam assist to Purdy, 21-15.  With the game in their control and the clock winding down, the Growlers ensured long Aviators points and were able to execute their own offensive holds.  Schmalenberger dished to Li for a late break and Purdy ended the game with an interception for the convincing 24-17 victory.

With the win, San Diego clinched a spot in the West Division Playoffs for the third consecutive season. Los Angeles was never able to break the Growlers offense, and Nate Pettyjohn led the way with 7 goals, 1 assist, and 1 block for +7 overall. Tim Okita, Khalif El-Salaam, Ethan Li, and Trevor Purdy all finished with strong +5 efforts as well.

San Diego will travel to LA on Aug 14 and end the regular season with a home game vs the San Jose Spiders on Aug 20. The Growlers need just one more win to host a home playoff game vs the Dallas Roughnecks on Aug 28 and a chance to advance to Championship Weekend for the second year in a row.