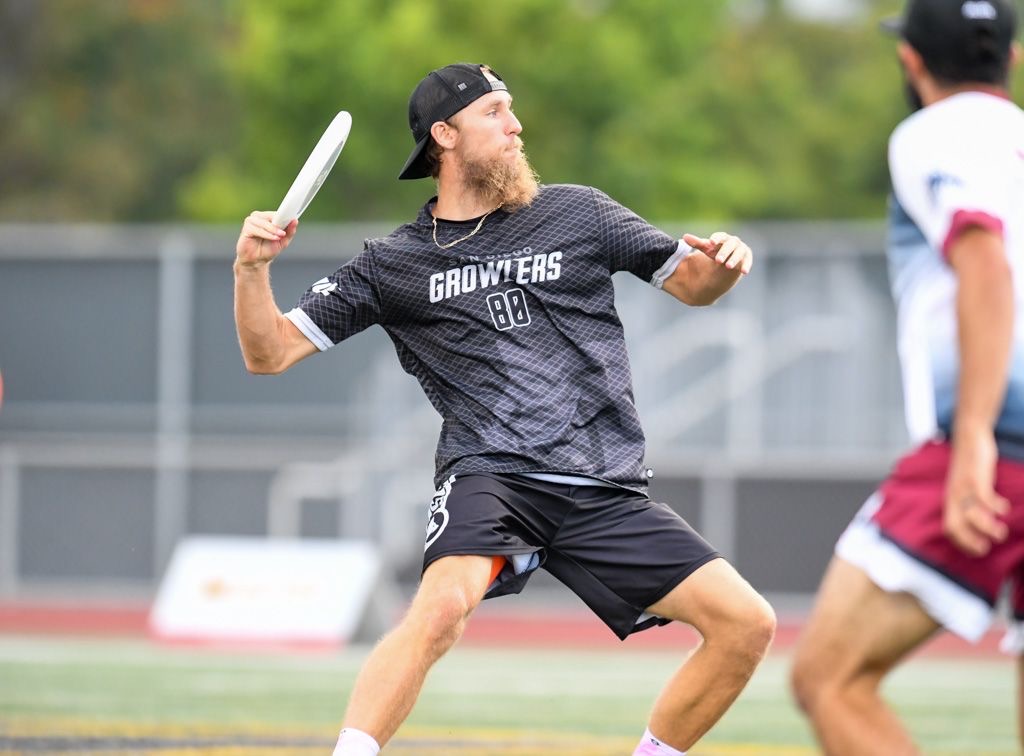 The San Diego Growlers hosted the undefeated Colorado Summit on July 15 after dropping a game to them on the road three weeks earlier. This matchup certainly had a playoff feel and the atmosphere was buzzing under the Friday Night lights of Mission Bay HS.

After an early throwaway, the Growlers started the offensive track meet when Travis Dunn connected with a leaping Sean McDougall on two trust throws, but the Summit answered, 2-2. The two teams traded several points with relative ease until Goose Helton fired a rocket flick to a sprinting Kyle Rubin who laid out for the diving highlight reel goal, 6-5. San Diego had a chance to break but Colorado eventually held as the quarter ended tied at 6-6.

To start the second quarter, former Growler Jon Nethercutt was pressured on the sideline resulting in a throwaway, and San Diego converted the break chance after a timeout when Tim Okita’s floater was brought down by a skying Dunn. Both teams were putting on an offensive clinic with big time plays, and Hunter Corbett followed suit with a huge grab over a defender. The trading continued as Paul Lally curved a backhand slicer to McDougall in the front of the end zone at the buzzer for a 12-11 Growlers lead at halftime.

The offenses picked up where they left off as Dunn looped a forehand to Corbett for another difficult catch, 13-11. The teams traded, then Matt Nelson tracked down the disc for the block, and Chris Mazur found a tip toeing Trevor Purdy for the break, 15-12.  Like a heavyweight bout, the Summit held and countered with a break of their own 15-14. The Growlers scored, then called a timeout after a Summit throwaway and cashed in a very patient break, Dunn to Rubin.  But once again, a Colorado hold and break pulled it back within one, 17-16. The last score of the quarter was pivotal as the Summit had a chance to tie, but Steven Milardovich defended a hammer and Purdy sprinted after a Dunn huck in the back of the end zone for the 18-16 lead.

Both teams were in rhythm and the Summit’s Quinn Finer started the quarter with a couple highlight reel goals, but the Growlers countered with perfect throws from Dunn and McDougall, 20-18.  Colorado had an opportunity to tie the game after a hold, but an Okita hand block served as a strong denial, 21-19. Riding this momentum, Stefan Samu intercepted an errant throw, and Milardovich eventually rewarded him with a hammer assist for a huge break and the 22-19 lead with 5:39 remaining. After a long point and blocks from Purdy and McDougall, San Diego eventually broke through on the knockout punch with only two minutes left. The Summit were able to score again, but the Growlers ran out the clock for a convincing and exciting 23-20 victory!

The Growlers were led by Sean McDougall (2 assists, 5 goals, 1 block) and Travis Dunn (8 assists, 3 goals) who each had +8 performances. Kyle Rubin had a big game with 1 assists, 4 goals and 1 block, while Tim Okita added 4 assists and 1 block. San Diego easily played their best game of the season and will look to continue their quality play on the road in Seattle and Portland this weekend.