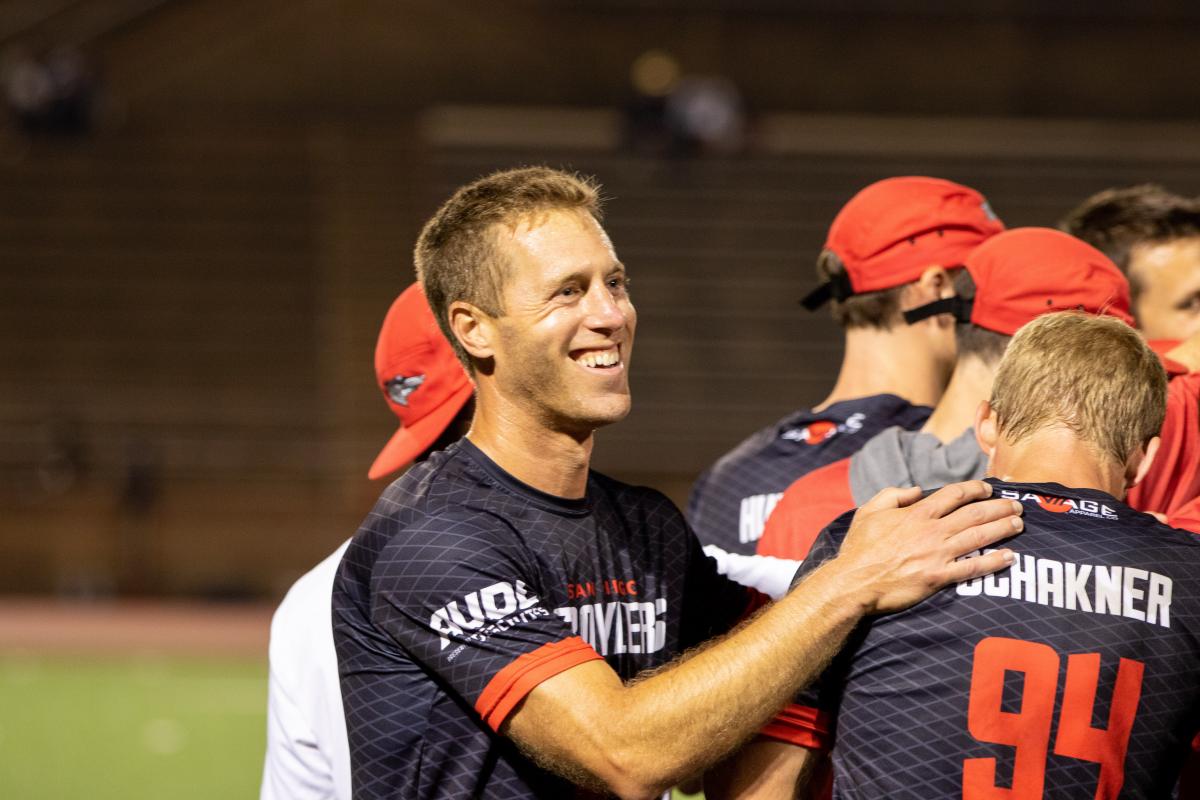 August 28, 2021 --- The first place San Diego Growlers (10-2) hosted a home playoff game versus the second place Dallas Roughnecks (8-4) in the AUDL West Division Championship.  With a record crowd on hand at Mission Bay HS, the winner of this much anticipated rubber match would earn the right to advance to Championship Weekend in Washington DC.

The Growlers started the game with a hold and great energy, with a Michael Tran block leading to a timeout.  The offense took the field and Jonathan Nethercutt unleashed a backhand huck to a sprinting Travis Dunn for the break score, 2-0.  On the next point, Khalif El-Salaam registered a hand block, then Zac Schakner found Jordan Queckboerner for another break. Dallas eventually got on the scoreboard, San Diego answered, and Dallas held again.  Jonathan Helton then became the all-time AUDL assists leader with a magnificent outside-in flick that floated perfectly into Dunn’s hands, 5-2. The Roughnecks were out of sorts now and a throwaway led to El-Salaam launching a backhand to a diving Hunter Corbett for an incredible catch in the endzone for a break. Each team held twice and the Growlers tight defense forced an errant throw with Kyle Rubin connecting with Queckboerner for the 9-4 lead.

Despite all the momentum and a couple more Dallas turnovers, the Growlers were unable to capitalize when the Roughnecks held and then broke, 9-6.  San Diego held and once more was unable to cash in on a golden opportunity after a timeout and Dallas held and broke again, 10-8.  The Growlers figured the best way to break down the sideline double team defense was a Steven Milardovich hammer to Helton but the Roughnecks answered right back. Helton found Nethercutt for the hold and Milardovich ended the half with a hail mary block, 12-9.

San Diego started the third quarter with a solid offensive hold as Nethercutt threw a nice crossfield flick to Paul Lally, 13-9. Dallas continued to play physical with a hold and another break to pull within 2 scores, 13-11.  With a little luck, Turner assisted to Helton, but Dallas punched in a score. An always creative Jesse Cohen carved a throw in to Lior Givol for the goal, Dallas held, then Okita assisted to Helton, 16-13. The Roughnecks scored and despite a Growlers miscommunication on the final point, Dunn was there to block the last throw in the endzone to prevent a last second score, 16-14.

Sensing the moment, Max Hume came up with a clutch block, the Growlers called timeout, and Dunn eventually dished to Givol for a big break, 17-14.  Both offenses were locked in a groove now and traded two scores apiece, with the last gritty San Diego hold draining 2:30 minutes off the clock. After a Roughnecks throwaway, the Growlers coaches called their final timeout with 4:33 remaining to sub in the offensive starters.  San Diego turned the disc over, but so did Dallas, and Helton made them pay with a pinpoint flick down the line to Nate Pettyjohn for the 20-16 lead with 3:05 left on the clock.  For good measure, Hume intercepted another pass, and El-Salaam rewarded him with the bookend goal, 21-16. Dallas held, but time was running out and Helton threw one last assist to Cohen.  The Roughnecks scored once more before the celebrations began, and Growlers emerged from the battle victorious, 22-18.

The Growlers were led by Jonathan Helton (5 assists, 4 goals, 1 block) with +10 and Lior Givol (1 assist, 4 goals) at +5.  Travis Dunn (2 assists, 3 goals, 1 block) and Jonathan Nethercutt (3 assists, 1 goal) were key contributors on offense, and Steven Milardovich and Max Hume each registered a pair of blocks on defense.

With the win, the Growlers will advance to their second consecutive Championship Weekend in Washington, DC on Sep 10-11, and will face an opponent from the Atlantic Division.