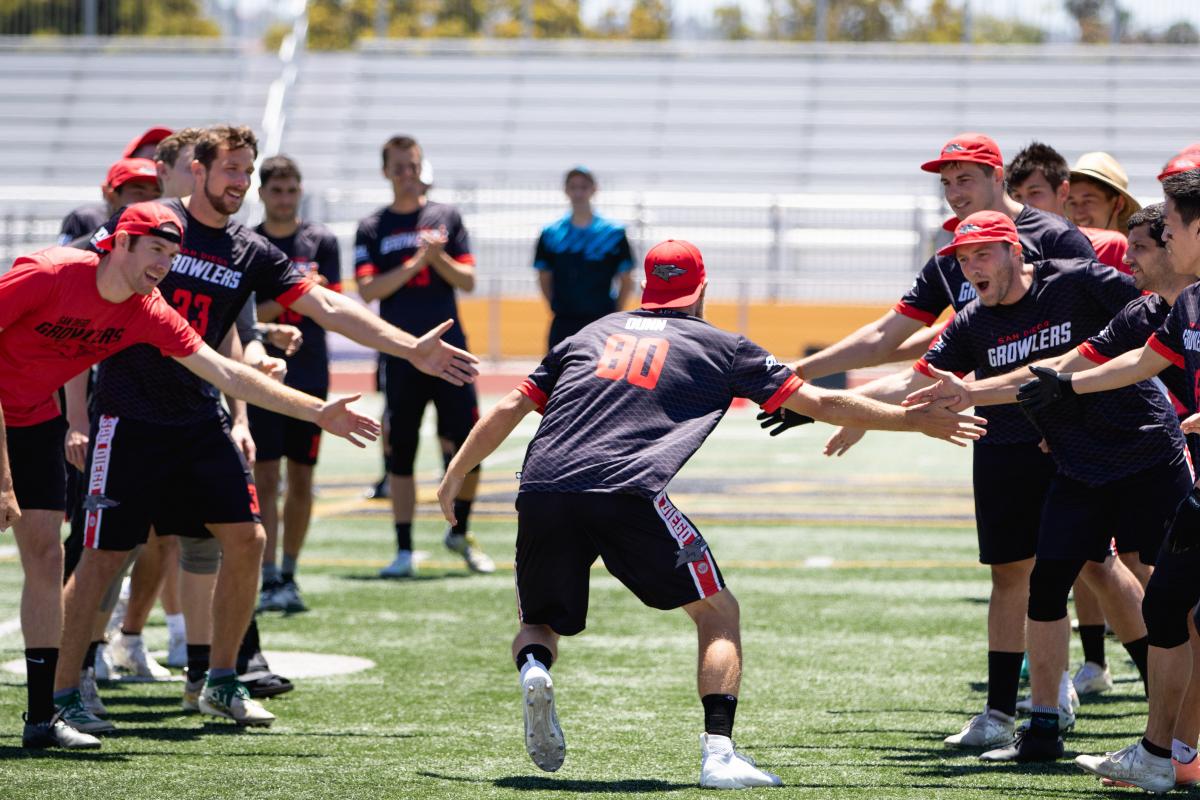 June 26, 2021 --- The San Diego Growlers hosted the Dallas Roughnecks in the AUDL Game of the Week at Torrey Pines HS in a front of a great crowd.  This was the long awaited rematch of the 2019 Championship Semi-Finals playoffs game, which San Diego lost, but was certainly extra motivation coming into this heavyweight battle.

Jonathan Helton started the 1st quarter with a long throw to Lior Givol for the score, and Dallas tied the game after the Growlers had a chance to break.  After three strong offensive holds from each team, the Roughnecks recorded the first break of the game to take the lead, 5-4.  Steven Milardovich assisted to Khalif El-Salaam for the hold, but Dallas countered and had a chance to break again before their endzone drop ended the quarter, 6-5.

After a Roughnecks turnover, the Growlers missed a great break opportunity in the redzone, and Dallas held 7-5.  A Travis Dunn flick huck kept San Diego close, and after a Dallas drop, Scott Radlauer unleashed a massive backhand throw to El-Salaam for the break, 7-7.  After another Dallas miscue, Milarodovich picked the disc up immediately and found a sprinting Reggie Sung for the goal, 8-7.  Each team traded scores until the Growlers last second buzzer beater was incomplete for a tie game at 10-10.

Dallas forced San Diego into a high stall turnover and broke to start the third quarter, but the Growlers responded with a hold, 11-11. The Roughnecks were steady with a hold of their own, and Dunn found Jesse Cohen with a deep huck for the counter, 12-12.  Each team found their offensive groove with a couple more holds and these back and forth exchanges were reminiscent of a boxing match, 14-14.  After a Dallas turnover and a San Diego timeout to sub in the offense, Tim Okita’s forehand around his defender connected with Helton for the break and the lead 15-14.  The Roughnecks responded with a score, and the Growlers were able to punch in a goal right before the buzzer to go up 16-15.

The Growlers maintained good defensive pressure and made Dallas work but they found a way to tie the contest at 16.  Lior Givol skied for a Dunn flick huck, and San Diego’s Jeff Silverman and Zach Schakner almost came up with layout blocks, but Dallas once again countered, 17-17.  The teams traded, Dunn assisted to Givol, and the Roughnecks threw the disc away on the next possession due to the Growlers defensive activity.  El-Salaam connected with Hunter Corbett for the break, but Dallas struck back with a hold, 20-19.  The Growlers were poised to score on offense but after a drop in the endzone, a Roughnecks timeout and break, the score was tied at 20 with 2:13 remaining. On the next possession, the Growlers attempted a deep shot but the disc sailed out of bounds, and the Roughnecks advanced to midfield before Paul Lally got it back with a layout block on the sideline! Just a few swing passes later, Helton calmly threw a backhand to a sliding Jesse Cohen for the goal with 14 seconds left, 21-20.  Dallas had a chance to tie the game and threw a desperation hammer at the buzzer, but Max Hume lept up for the block to secure San Diego’s victory.

The Growlers were led by Travis Dunn with a +8 performance (6 assists, 3 goals) and Paul Lally contributed a +4 effort (1 assist, 3 goals, 1 block).

At 4-1, San Diego takes over first place in the wild West Division, and will enjoy a double bye before hosting the Austin Sol on Sunday, July 18 at Mission Bay HS.