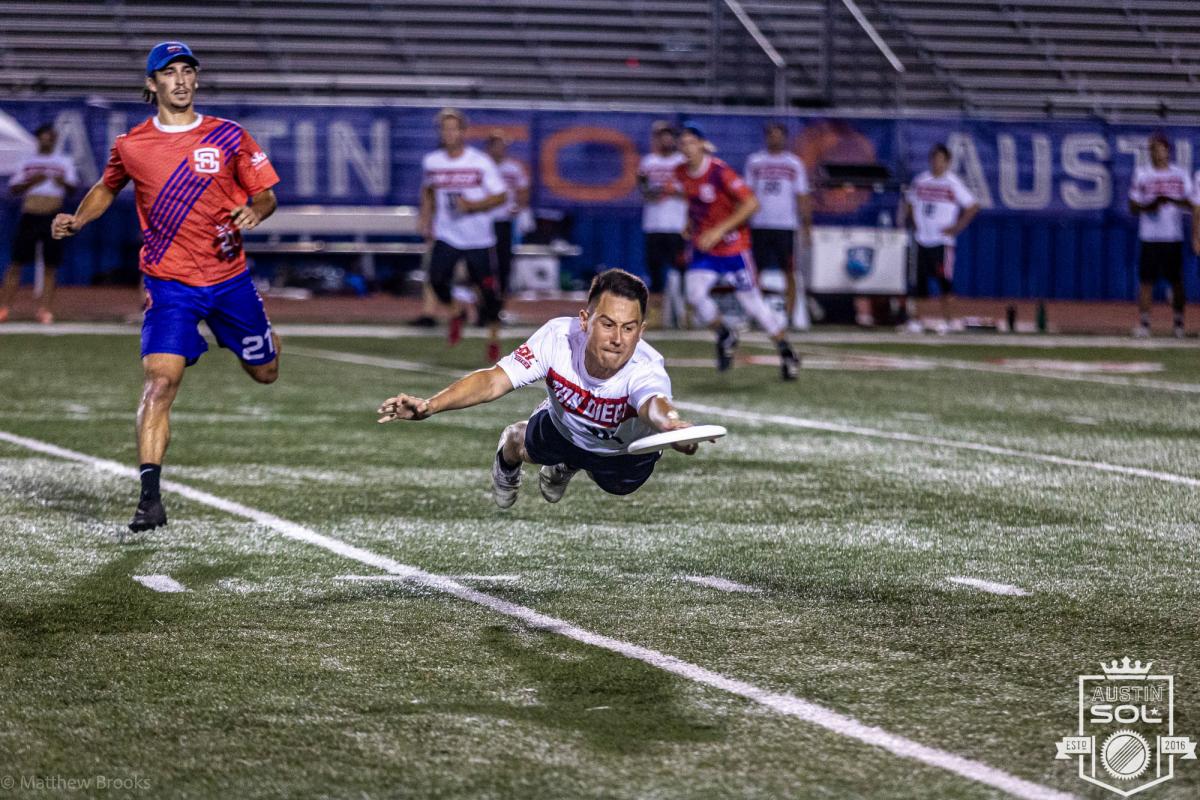 July 24, 2021 - After suffering a tough loss to Dallas the night before, and enduring another day of sweltering heat, San Diego started flat and throwaways/miscues led to four consectutive Austin breaks. Finally, the Growlers caught their collective breath, and Nate Pettyjohn connected with Jesse Cohen to stop the bleeding. The Sol responded with a hold, and Jonathan Helton's backhand huck found Cohen, but Austin held again for the 6-2 lead. The Growlers turned it over, Austin called timeout with 4 seconds left, but Jordan Queckboerner knocked down the Hail Mary attempt at the buzzer.

After the sluggish first quarter, the Growlers defense stepped up by forcing the Sol to call a timeout and work hard for more than 4 minutes before scoring. On offense, Helton split the double team to Kyle Rubin for the hold, and after a Max Hume interception and timeout, Rubin assisted to Lior Givol for the first break, down 7-4. Gaining some momentum now, Jeff Silverman rose up for defensive block to save a goal, then Steven Milardovich unleashed a flick Huck to a sprinting Reggie Sung for another break. Austin had to work hard for their hold again, but the Growlers were starting to find their offensive rythym with Givol shooting to Travis Dunn for the hold, 8-6.  After holds from each team, the Sol held again and converted a break score following a Growlers throwaway for the 11-7 lead.

San Diego's offense bounced back with a Givol to Cohen quick strike, and after an Austin throwaway, Michael Tran assisted to Silverman for the break. The Growlers capitized on a Sol throwaway, and Hunter Corbett tossed to Pettyjohn for another break. Following turnovers from both teams, Tran's block in the endzone saved a goal, and a timeout allowed Givol to find Dunn for the third straight break to tie the game at 11s.  With all the momentum, Sung intercepted an errant throw, then a few throws later sent a flick huck to a diving Wes Groth for another break and the Growlers first lead, 12-11. After several holds and great plays by each team, Will Turner's layout block in the end zone saved a goal, and Hume threw to Queckboerner for a break goal with 6 seconds left and the 16-14 advantage.

The Sol held on offense, but the Growlers were confident and steady as Tim Okita connected with Corbett for the hold.  On the next point, an Austin throwaway led to a Turner cross field dime to Zac Schakner for the big break 18-15. Dom Leggio then doubled-down with a nice hand block on the sideline, and Corbett to Tran capped off yet another break for the 19-15 lead with 5:33 remaining. San Diego had time in its favor and forced Austin into long holds, and the Growlers responded back with scores for the eventual 21-17 come from behind victory!

The Growlers defense tallied 15 total block and was the difference in the win, as they converted on 9 of 15 scoring chances, many coming in the second half.  Lior Givol led the team with +5 (5 assists, 1 goal) and Will Turner, Travis Dunn, Hunter Corbett and Jesse Cohen each had +4 performances, with Dom Leggio recording 3 defensive blocks. San Diego will look to defend their home turf this Saturday, July 31 when the Seattle Cascades travel to Mission Bay HS!