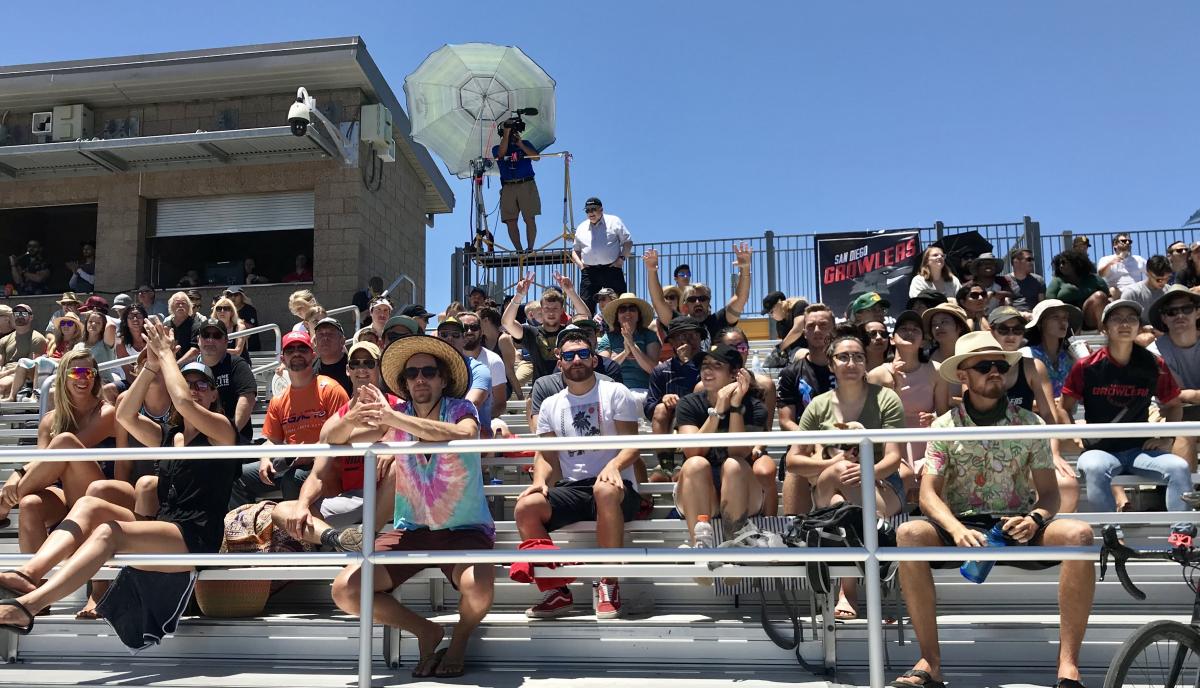 June 13, 2019 --- San Diego’s home opener was a rematch of the previous week, as the Growlers now played host to the Los Angeles Aviators following a victory on the road, 19-16.

With sunny skies, wind, and a big crowd at Mission Bay HS, Khalif El-Salaam made his Growlers debut with the opening pull, and Will Turner followed with a massive block, but LA held strong and scored twice in a row, 2-0. After a SD hold, Paul Lally found Jeff Silverman for the break to even the count.  After a couple offensive holds from each team, highlighted by a Jonathan Helton flick to Lior Givol, LA held and broke again, 6-4.  Steven Milardovoch assisted to Hunter Corbett on the next point, but the Aviators conjured up some magic after a deflected disc was caught in the endzone at the buzzer, 7-5.

The Growlers started strong when Travis Dunn dished to Nate Pettyjohn for the hold, and the defense generated multiple turnovers on the next possession, but LA managed a way to score, 8-6.  Tm Okita kept San Diego close after two highlight reel layouts for scores, but the Aviators were persistent with a hold and 3 breaks in a row after implementing a double-teaming strategy on the sideline and taking advantage of other Growlers miscues, 13-8.  It was very much an upwind/downwind type of game, and this time San Diego had a last second chance to score at the buzzer but the disc just landed out of reach.

After SD missed a couple opportunities to break upwind, LA held on and stretched their lead to 14-8.  Helton and Dunn had an All-Star connection to stop the bleeding, but LA countered after another chance to break upwind was thwarted.  After a series of offensive scores from each team, Givol came through with a callahan for an uncommon hold and the Growlers trailed 17-12.  After an Aviators hold, Michael Tran assisted to Kyle Rubin, but LA kept answering.  San Diego had another opportunity to score at the buzzer but the disc floated downwind a couple feet too far out of bounds, 20-14

The Growlers dug themselves a deep hole and would need a huge effort to erase this 6 goal deficit, and it began with a hold on offense, 20-15.  Jeff Silverman provided a spark with a layout defensive block, and after a SD timeout, Tran dished to Givol for the break with 8:21 remaining, 20-16.  Scott Radlauer stepped up next with a huge foot block on the sideline, and Dom Leggio would eventually connect with El-Salaam for another break score with 7:19 on the clock.  Zac Schakner followed suit with a layout block preventing a LA score and SD spent their last timeout to substitute in their offensive line. Lally launched a long, upwind backhand to Dunn who skied for the catch and found Okita for their third break in a row, 20-18 with 3:31 left in the game!  The next point featured multiple turnovers and a nice double team from Turner and Radlauer resulting in an El-Salaam backhand huck with 30 seconds left.  Max Hume was the intended receiver but a diving Aviator defender caused enough of a distraction to result in a dropped disc in the endzone.  With that, San Diego’s fierce comeback bid fell just short after holding LA scoreless in the 4th quarter, 20-18.

The Growlers will certainly look back at the poor stretch at the end of the 2nd quarter, red zone scoring issues, and several missed opportunities overall as a cause for this loss. Lior Givol and Tim Okita each registered 4 goals, 1 assist, and 1 block and Travis Dunn tallied 4 assists and 2 goals.

San Diego will need to lick their wounds and bounce back for away games versus the San Jose Spiders on Jun 18 and the Seattle Cascades on Jun 20.