Growlers Comeback to Down Aviators | AUDL
Skip to main content 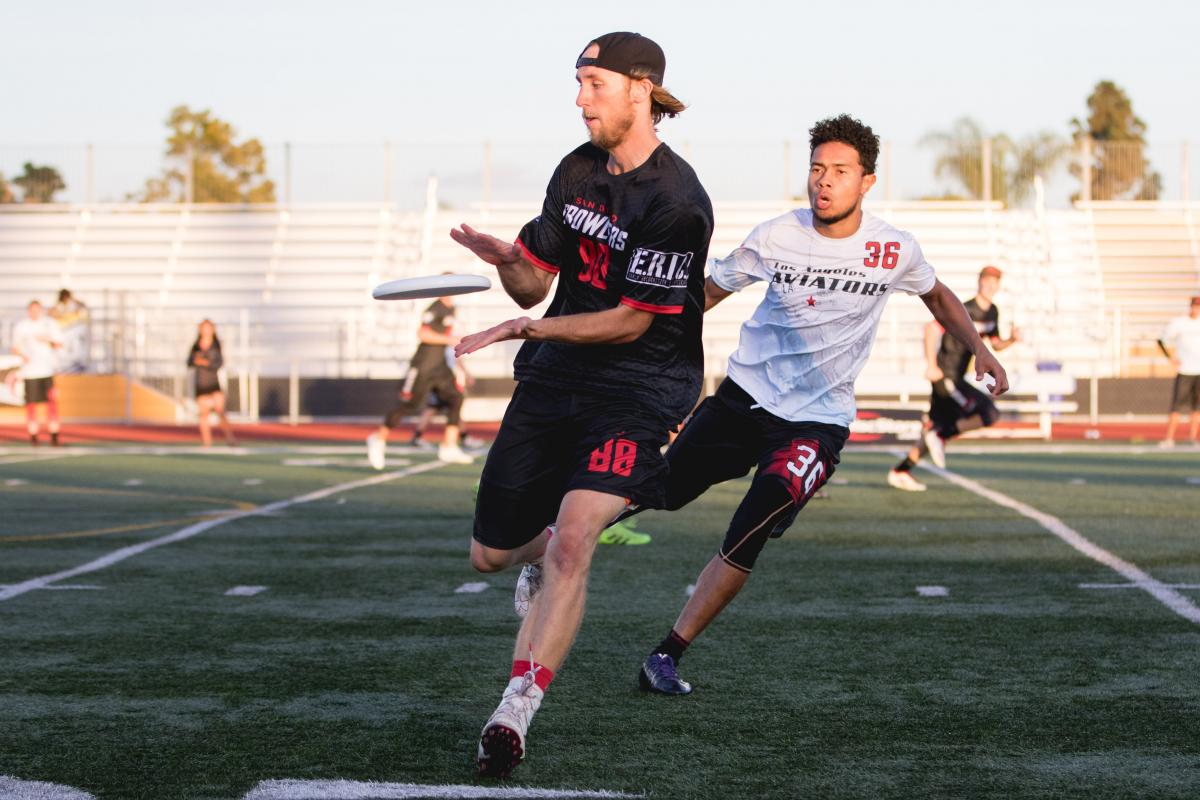 The San Diego Growlers traveled north to face the Los Angeles Aviators in another chapter of their compelling SoCal rivalry.  San Diego started the scoring, but LA countered and broke to take an early 2-1 lead.  Travis Dunn helped the Growlers get back on track with a backhand laser throw to Jesse Cohen who laid out for the goal in highlight fashion.  The teams traded offensive holds until the Aviators intercepted a last second buzzer-beater attempt and held on to a 6-5 advantage.

Los Angeles scored on offense to start the second quarter, then capitalized on Growlers’ turnovers for 2 consecutive breaks, 9-5.  The Growlers answered with a smooth cross-field scoober from Jonathan Helton to Sean Ham, and broke when Dave Ritchie came up with bookends, 9-7.  The rivals traded two scores each before the Aviators benefitted from a questionable call and scored at the buzzer to take the 12-9 lead into halftime.

The Growlers and Aviators traded holds in the third quarter but a San Diego throwaway on the next possession led to a LA break, 14-10.  The teams traded, then San Diego held on offense and broke on defense when Kyle Rubin dished to Nate Bridges.  On the next point, Trevor Purdy rose up for the nice block to prevent a goal and the Growlers called timeout and broke again.  San Diego took advantage of another LA turnover as Mark Slader assisted to Scott Radlauer for the game-tying goal, 15-15.  But once again, the Aviators beat the buzzer to take the lead back, 16-15.

The 4th quarter began with LA and San Diego trading two scores each, but the Growlers tied the game at 18s when Will Turner found Ryo Senda for the break score.  The Aviators worked the disc up the field close to the goal line, but Helton defended the next throw and the Growlers used their final timeout to sub in the offense.  After several passes, the captains connected on the go-ahead deep goal, Dunn to Steven Milardovich, 19-18 with 3:39 remaining.  There were several turnovers from each side on the next point, but Dom Leggio secured the final defensive interception and threw a deep flick dagger to Helton with only 54 seconds left.  The Growlers would go on to secure another defensive block to seal the come from behind, gritty victory, 20-18!

Jonathan Helton paced the Growlers with 4 assists, 2 goals, and 2 defensive blocks, Travis Dunn contributed 4 assists and 4 goals, and Sean Ham scored 5 goals (as usual).  Both Helton and Dunn will suit up this weekend as AUDL All-Stars in Madison, WI, and then the Growlers (7-1) will host LA (5-3) on Saturday, June 15 at Mission Bay High School in a likely West Division playoff preview.