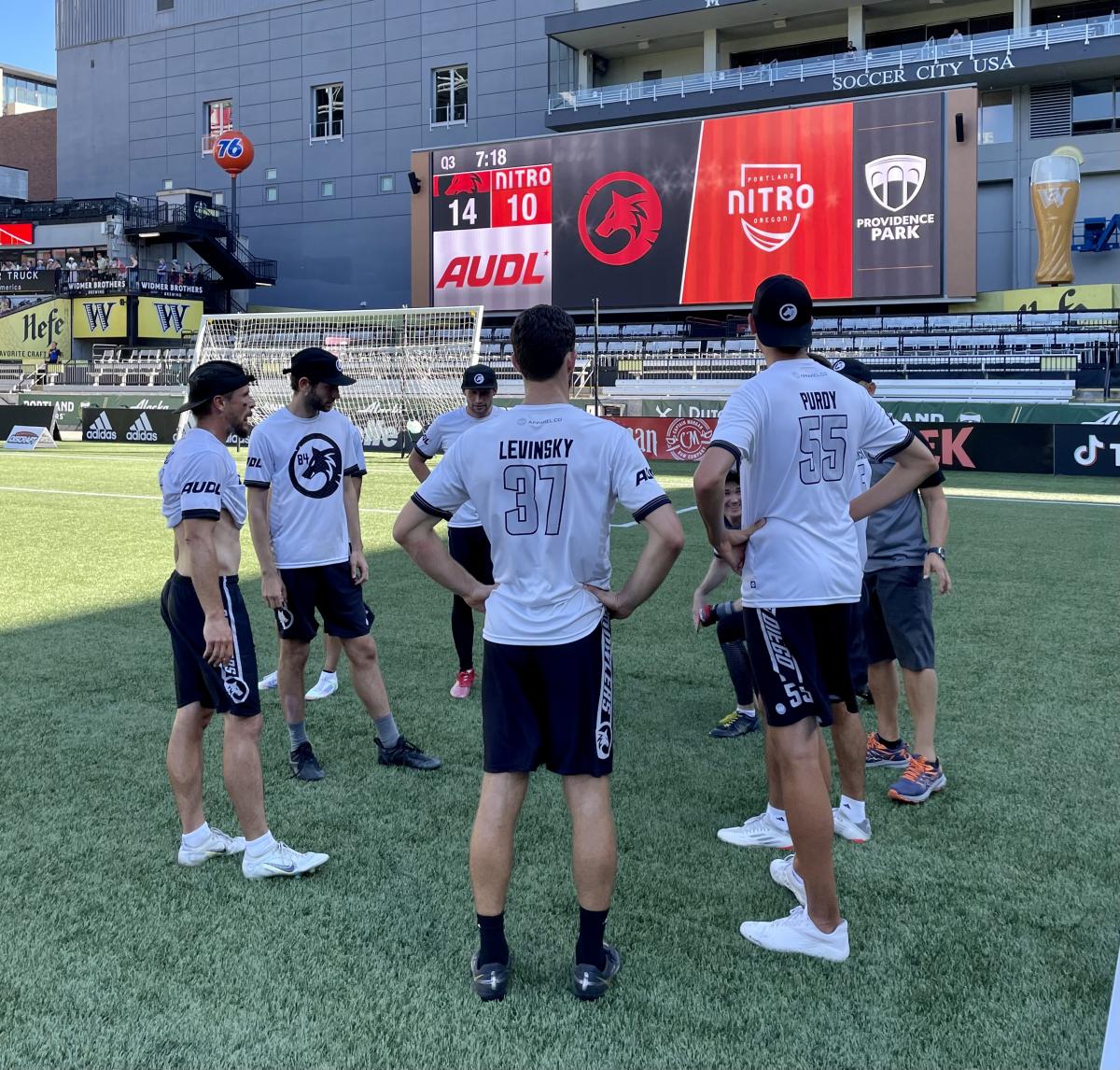 The San Diego Growlers traveled to Seattle on Saturday, July 23, needing a win over the Cascades to lock up the #3 seed in the West Division Playoff race.

Seattle started the game with a throwaway, and a patient Growlers counterattack capitalized as Bryce Lozinski found Max Hume for the early break. Ben Levinsky followed that with a block on the next point, then Tyler Bacon sent the disc deep for Trevor Purdy who bid for a huge layout score. The Cascades held, then broke back 2-2. After a couple holds, the Growlers forced multiple Cascades throwaways with great pressure, and called a timeout to seal the break, 5-3. Seattle held on offense, then Tim Okita found Steven Milardovich for the score with 2 seconds left, and a Jordan Queckboerner block ended the quarter 6-4.

After a Growlers turnover in the end zone, the Cascades capitalized with a break to make it 6-5. After several holds from each side, a Seattle throwaway led to a Queckboerner to Elliot Warner break, 10-7. More trading, then a Milardovich block allowed for a Growlers timeout with under a minute left, and Travis Dunn connected with Sean McDougall for the buzzer beater and the 12-8 lead.

The third quarter started like the first with a Cascades turnover leading to a break when Stefan Samu assisted to Max Hume. Seattle held, then they capitalized on Growlers miscues for three straight breaks, 13-12. San Diego called a timeout to regroup and the offense promptly flowed right up the field for a score. Milardovich made a clutch block on the next point, resulting in a Samu to Queckboerner break. Not to be outdone, Warner also rose up for a bock, then secured the bookend score on a Bacon scoober throw. After trades from each squad, Seattle scored as the buzzer sounded, 17-14.

After multiple turnovers, a Cascades timeout, and 4 and a half minutes elapsed, the Growlers finally prevailed when Bacon found Hume for the long awaited hold, 18-14. The teams traded several scores, highlighted by a McDougall backhand to Goose Helton for the 21-17 lead with 2:12 remaining. The Growlers proceeded to bleed the clock out with zone defense and Paul Lally put the icing on the cake with a hammer to McDougall for the 22-18 victory!

The Growlers were led by Sean McDougall with a +7 performance (3 assists, 4 goals, 1 block).  Jordan Queckboerner had a great all around game as well with a +5 outing (1 assist, 2 goals, 2 blocks). With the win, the San Diego Growlers clinched a playoff berth for the 4th season in a row and will be the #3 seed in the West Division Playoffs.

On Sunday, July 24 the Growlers arrived in Portland to face a Nitro team under very hot and windy conditions at beautiful Providence Park.

Both teams were adjusting to the tough conditions during warm-ups and the first 3 minute point that featured several turnovers and blocks, but the Growlers prevailed when Steven Milardovich dished to Tyler Bacon for the break. A couple trades and a Growlers drop gave the Nitro their first break and lead of the game 3-2.  Paul Lally threw an assist to Sean McDougall for the equalizer, but the teams continued to trade out with Portland ending the quarter with a buzzer beater up 6-5.

The Growlers held on offense then called a timeout after a Nitro drop to try and secure another break.  Inexplicably, Kyle Rubin was hand blocked on the goal line, but reacted quickly to layout and catch the disc before it hit the ground for the goal and lead 7-6. Portland bounced back with a hold and a break of their own to go up 8-7. The Growlers countered with a hold and break to retake the lead 9-8. The teams traded more scores with San Diego just missing on a break opportunity to end the quarter, but took a 11-10 lead into the locker room at halftime.

Portland began the third quarter with a turnover, and San Diego converted the break chance with a Max Hume to Stefan Samu break. On the next point, Bacon intercepted a huck which eventually led to a Bryce Lozinski deep throw to Zac Schakner for the goal. Then Elliot Warner stepped up with a block, resulting in a Steven Milardovich assist to Michael Tran for their third straight break, 14-10.  Portland called a timeout to regroup which was successful, and led to both teams holding on their offensive possessions. The Growlers were able to prevent a Nitro score before the quarter ended, preserving their 18-14 advantage.

The heat was taking a toll on both sides at this stage of the game leading to some tired turnovers, but the offenses were still managing to hold for several scores in a row.  San Diego changed the tide when Ben Levinsky intercepted a Nitro pass, which led to Jordan Queckboerner sending a perfect backhand deep pass to Elliot Warner, 22-16.  After a few more trades, the clock ran out and the Growlers secured the 23-18 win.

The Growlers were led by Paul Lally with a +8 performance (7 assists, 1 goals, 1 block), with Kyle Rubin and Sean McDougall adding solid games with +4 each. San Diego will host the Oakland Spiders on July 30 for the last regular season contest before heading to Salt Lake City for a playoff game vs the Shred on Saturday, Aug 13.