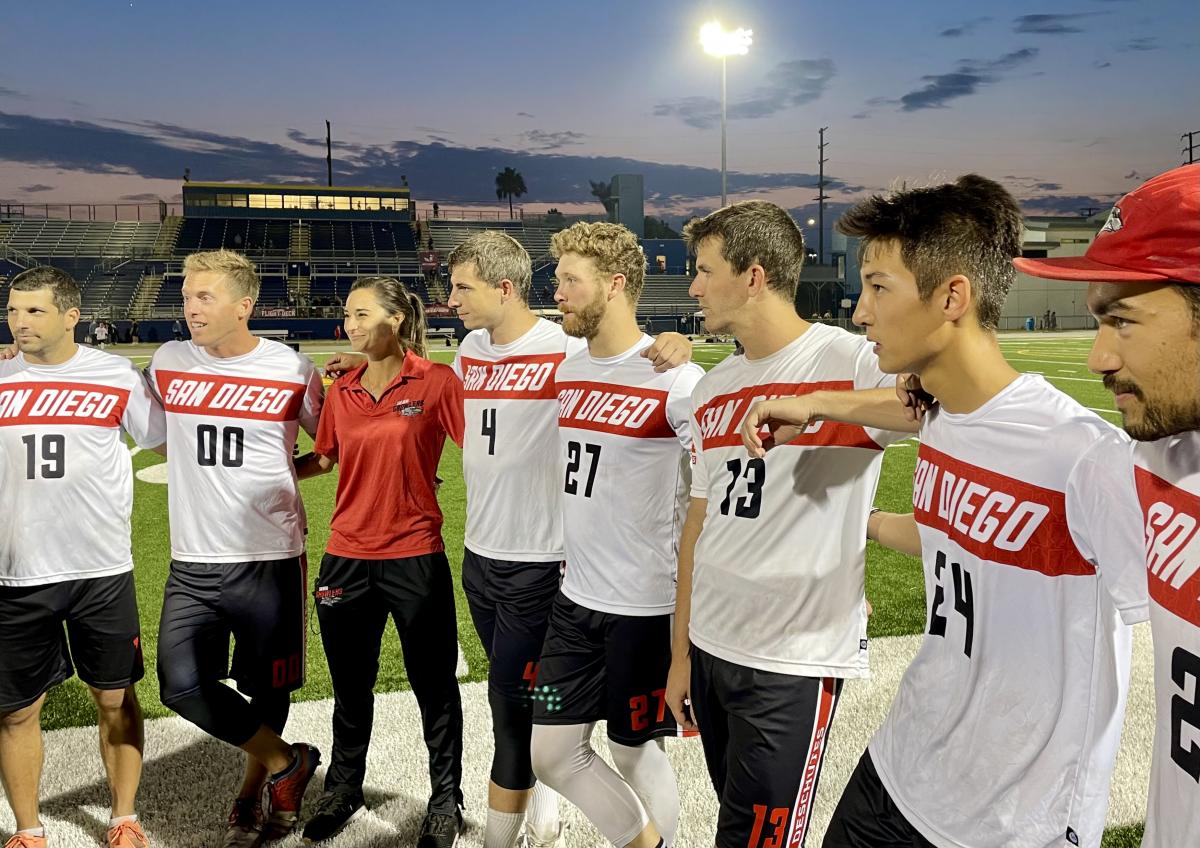 August 14, 2021 --- With just one victory away from hosting an AUDL West Division home playoff game, the San Diego Growlers traveled north to face their SoCal rival, the Los Angeles Aviators.

Despite the windy conditions, San Diego came out the gates firing with a huck from Lior Givol to Goose Helton and then forced an LA turnover, but the Aviators eventually scored.  The Growlers held and after forcing a long point, Will Turner earned a block and then was rewarded by Jeff Silverman with the bookend goal for the break 3-1.  Each team scored twice before a Silverman block led to Dom Leggio finding Michael Tran for the break.  The Growlers gained possession with time winding down after a Jordan Queckboerner swat, but LA found a way to score before the quarter ended, 6-4.

The Aviators started with a score, then both teams held, followed by an LA break after multiple turnovers to tie the game at 7s.  A similar long point ensued with several miscues and the Aviators took advantage by calling a timeout and converting the break score.  The wind was certainly a factor and influenced another Growlers miscue and Aviators break, 9-7.  Paul Lally connected with Givol to stop the bleeding with 14 seconds left, and San Diego got the disc back but couldn’t quite reel in the break goal as the first half ended.

Much like the first quarter, the Growlers deep shot worked from Helton to Givol to tie the game at 9s.  The rivals both found their groove on offense with three holds apiece, with Nate Pettyjohn and Travis Dunn skying for goals.  Steven Milardovich came up with an important block and Tran to Leggio cemented the break. The next point featured multiple turnovers as the Growlers defensive intensity increased, and Turner eventually assisted to Daniel Mah for another break to increase their lead to 14-12. The Growlers squandered a golden opportunity at the end of the quarter but the momentum had clearly swung in their favor.

The San Diego defense was hungry, evidenced by Zac Schakner intercepting the disc, and Bryce Lozinski dished to Stefan Samu for the break, 15-12.  Each team held twice before a Milardovich interception and Growlers timeout.  San Diego ran a confident offense and Lally shot a cross-field flick to Kyle Rubin for the break with 5:25 remaining and the 18-14 lead.  The Aviators kept fighting with holds and trying their double team defense on the sidelines, but the Growlers kept completing passes and scoring as several minutes elapsed and the game eventually ended in 21-17 victory.

San Diego will finish up their regular season by hosting the San Jose Spiders on Fri, Aug 20. Then, on Sat, Aug 28, the Growlers will host the Dallas Roughnecks at Mission Bay HS for the opportunity to advance to Championship Weekend!