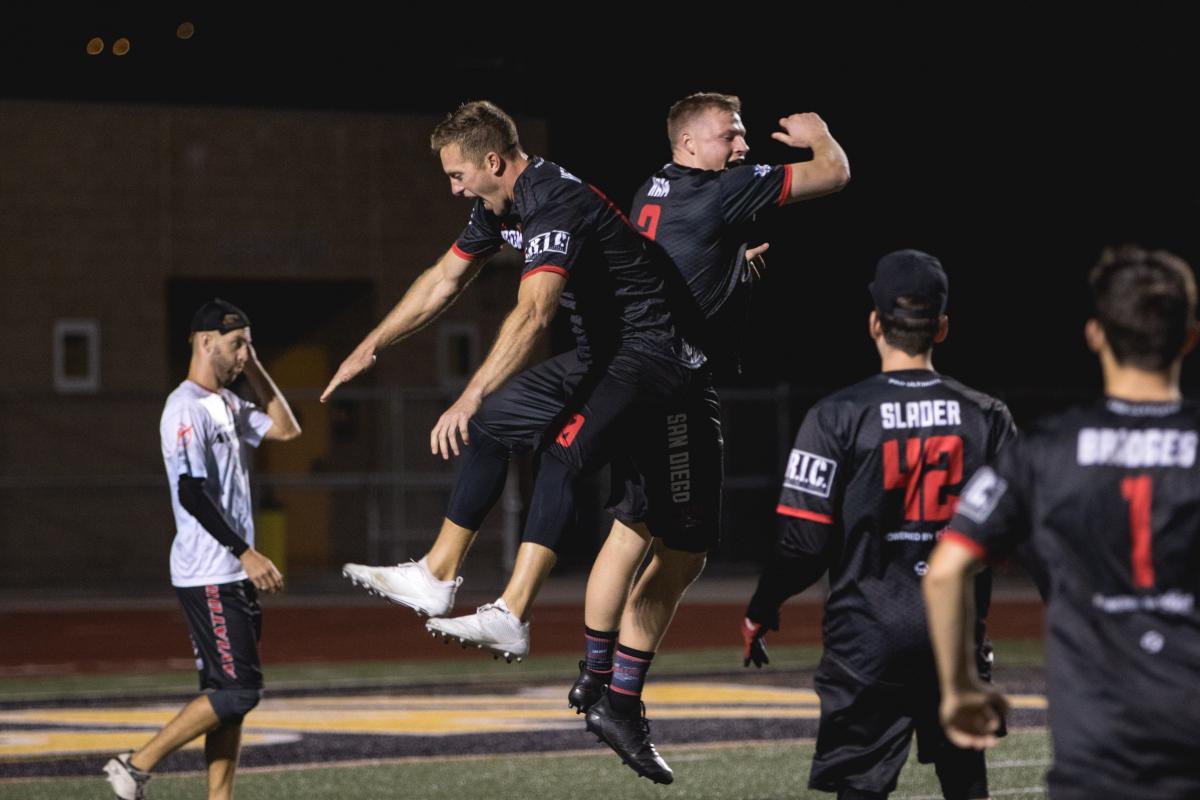 The San Diego Growlers hosted the Los Angeles Aviators in a SoCal rivalry game to start the 2019 American Ultimate Disc League (AUDL) season. This was a rematch of the 2018 West Division playoff game, and the Growlers were hungry to avenge their 26-22 loss from last season.

San Diego started the game by trading offensive scores with LA, then Sean Ham got the crowd on their feet with a giant leaping catch for the score, 2-1.  Both teams traded several goals, but the Growlers executed on a break to extend their lead to 6-4 late in the first quarter.  The Aviators scored with 10 seconds left, but San Diego’s Jonathan “Goose” Helton lofted a backhand to the endzone and Trevor Purdy came down with the buzzer beater, 7-5.

Los Angeles scored on offense to start the second quarter, then took advantage of a couple throwaways for 2 consecutive breaks to take the lead 8-7. The Growlers answered and had a couple chances for a break during the next point, but LA prevailed with a score after several minutes. After tying the game on their next offensive possession, the Growlers showed a zone defensive look and Purdy used his length again to block a throw on the mark. The Growlers called timeout, subbed in their offensive line, and regained the lead 10-9.

Coming out of halftime, Growlers captain Travis Dunn threw a back shoulder flick huck to Sean Ham for the first score of the third quarter, 11-9. The Aviators held, then broke to tie it, then Helton found Ham to go ahead 12-11. More trading, then Sam Fontaine defended a floaty throw from LA and then eventually assisted to Nate Bridges for the break, 14-12. The third quarter came to a close with San Diego up 16-15.

The fourth quarter began with each team trading scores, with the highlight being Helton’s scoober that traveled half the field to Wes Groth, 18-17. The next point (which lasted four minutes) featured several turnovers, two timeouts, and one huge momentum swinging layout catch from Sean Ham for the break to put the Growlers up 19-17 with 4:44 left. LA would finally punch in their offensive possession but 2:30 went by in the process, 19-18. The Growlers calmly took their time on offense with time winding down, and Growlers captain Steven Milardovich somehow squeezed a hammer (past a flying Jeff Silverman) into the sure hands of Sean Ham for the 20-18 lead with 1:04 left.  Down two scores, LA was forced to take a quick shot in the endzone, but Bridges and Purdy ended any hope of an Aviators comeback and the Growlers celebrated a home victory.

The Growlers were led by Sean Ham with seven goals and Travis Dunn with four assists, one goal, and three defensive blocks. In his first game with San Diego, Jonathan Helton had a big impact with four assists, two goals, and all around steady play. San Diego will have a quick turnaround as they host the San Jose Spiders on Saturday, April 13 at Mission Bay HS at 6:45 pm.  This game will decide who sits atop the West Division, as the Spiders bested the Seattle Cascades by one point in overtime.