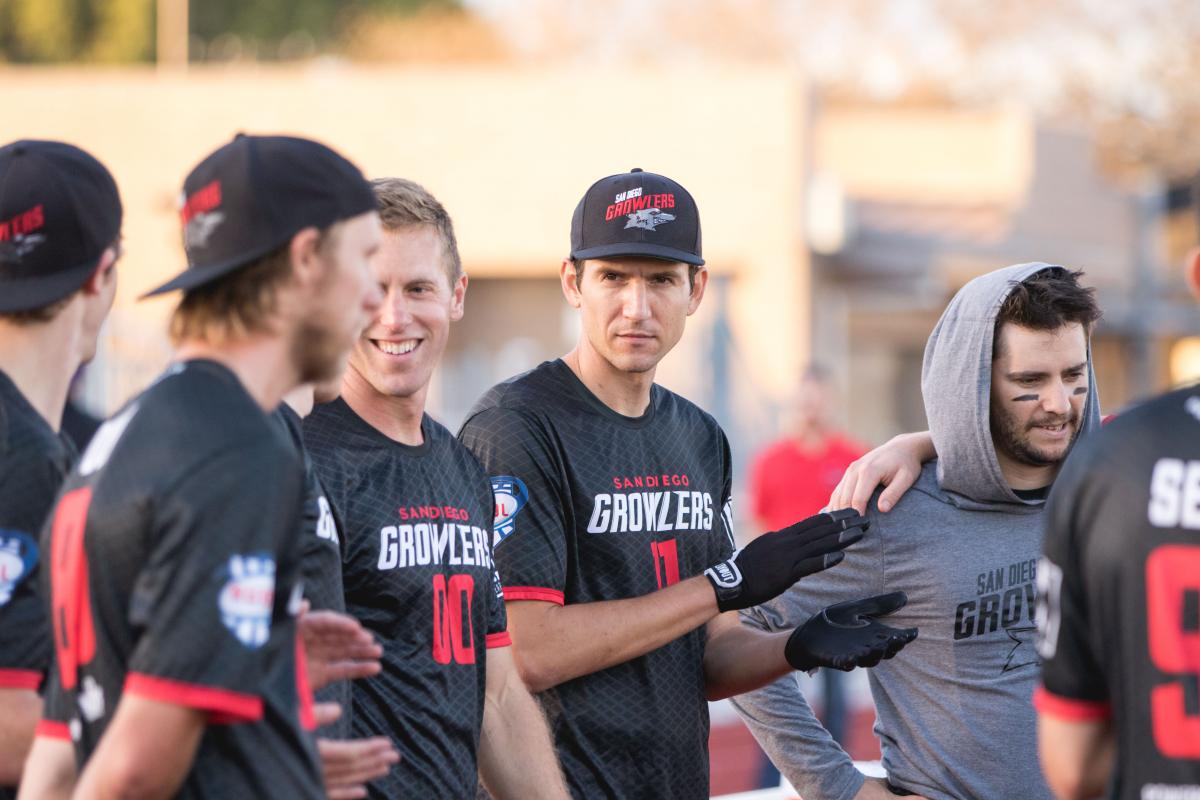 The San Diego Growlers hosted the San Jose Spiders in an early battle for first place in the AUDL West Division.  San Diego started the game with a break score and after forcing another turnover on the next point, the Spiders held on offense with a Callahan, 1-1. Trading ensued for both teams but was highlighted by Will Turner’s backhand rip to Jonathan Helton, a layout block by Marcel Osborne, and a leaping grab Travis Dunn.  Late in the quarter, San Jose threw a hammer for the break score for a two-goal lead and went ahead 7-5 after 12 minutes of play.

The Growlers wasted no time on offense with a Helton forehand huck to a diving Sean Ham, but the Spiders held as well.  A couple more trades, then San Diego took control with two consecutive break scores to take the lead 11-10.  Both teams held on offense, then Trevor Purdy had a massive layout block on Antoine Davis, and Max Hume dished to Scott Radlauer for an easy break, 13-11. The score going into halftime was 14-12 with the Growlers earning three breaks in the second quarter.

Coming out of halftime, the Spiders and Growlers held, but Growlers captain Steven Milardovich intercepted the disc on the ensuing San Jose possession, which led to another break, 16-13.  The Spiders scored and the teams traded before San Jose converted a much-needed break to draw within one point. But after a gliding Wes Groth sky for the hold, a Milardovich kick block and a great bookend catch for the break score, the Growlers took a 20-17 lead into the last quarter.

San Jose started strong with two straight breaks before San Diego righted the ship, still ahead 21-19.  The teams traded several scores before San Jose eventually capitalized on a break and tied the game at 24-24 on a crazy back and forth sequence.  After an initial overthrow, Ryo Senda got the disc back with a huge layout interception, but his next throw was defended and the Spiders eventually scored with just under one minute remaining.  The Growlers wisely took their time and patiently advanced the disc up the field knowing they would either get a chance to win with no time left, or at worst, head into overtime.  With about five seconds left, Helton had the disc on the sideline and threw a centering pass that was deflected, but Travis Dunn made an incredible layout catch, then got to his feet quickly to throw a last second flick into the endzone.   Sean Ham had the best position for the reception, but after the disc bounced off one hand, a San Jose defender swatted the disc directly behind the crowd of players, and Max Hume laid out for the buzzer beating score to win the game!

The Growlers were led by Jonathan Helton with 8 assists / 2 goals, Wes Groth with 3 assists / 4 goals, Travis Dunn with 4 assists / 3 goals, and Steven Milardovich with 1 assist / 1 goal / 3 defensive blocks.  San Diego is 2-0 to start the 2019 season and is currently in first place in the West Division.  The Growlers will fly north to San Jose on Saturday, April 20 for a must-watch rematch versus the Spiders.