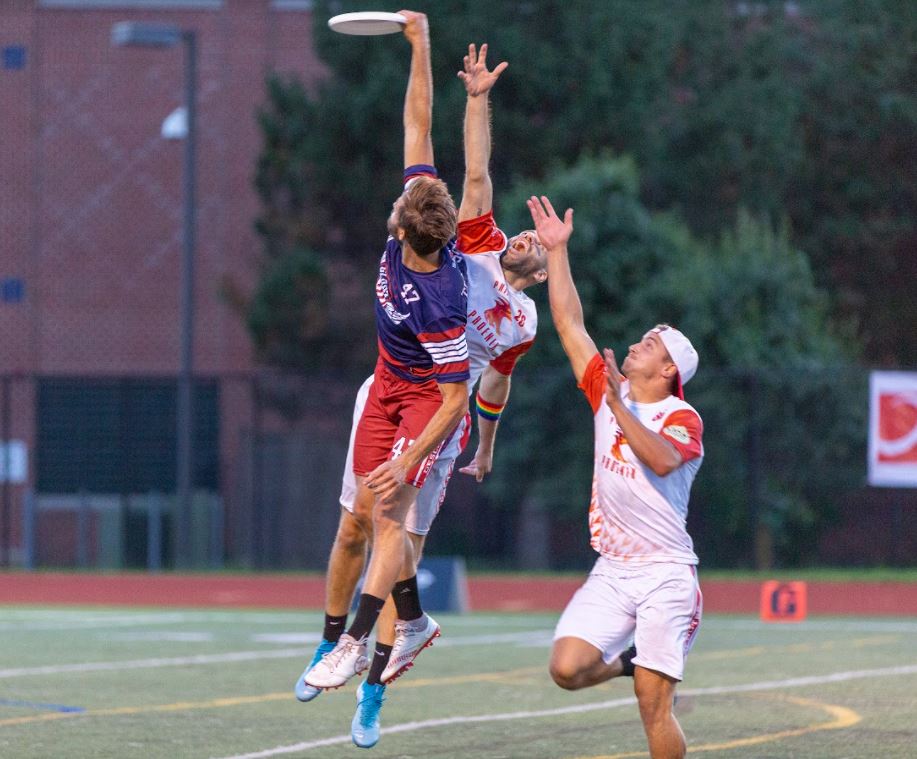 On a cool night in Medford, the fires of Philadelphia Phoenix burned bright as they outlasted Boston’s late surge, holding on for a 23-22 victory. In a matchup between two teams with defensive struggles, this one would become a battle of the defenses, as Phoenix would both outlast and outperform that of Glory.

Philly would force 16 turnovers out of Boston, going an impressive 7/10 on breaks; while Glory’s 19 forced turnovers would convert to just 6/13 on break opportunities. With Phoenix only recording 7 blocks, it was the unforced errors that would become Boston’s kryptonite, with misrun routes and key drops dragging Boston down.

Philadelphia broke Boston’s offense on the game’s opening point, taking a 2-goal lead after the first quarter and a 1-goal lead into half.

Boston, however, would come out as a different team in the second half. Opening the half with three-straight goals on the back of stellar play from Gus Haflin and the Boston D-Lines.

“Really, our focus over the course of the last 2 weeks, with the bye week, has been… on team cohesion…; we took the last two weeks to just talk to each other and establish, ‘what do we want to do as a team?’ Haflin said postgame. “… it enabled us to come back out in the second half and work as a cohesive unit.”

That lead wouldn’t hold, however, leading to an exciting, nail-biting finish. Boston would give up a late break, before scoring on the penultimate point after Jake Taylor found Henry Babcock on a huck down the left side, who put into the endzone for Ben Sadok to score. With 24 seconds remaining, Boston’s rolling pull would be converted into a Chris Bartoli block, but the offense couldn’t finish, with Babcock’s last-second huck falling short and being blocked.

Growing pains are to be expected in an expansion team, but with each game and each passing week, Boston continue to learn their identity and take steps towards what they hope to become.

Boston take these lessons into the gauntlet next weekend, with a matchup Saturday against the New York Empire, who last beat these same Philadelphia Phoenix in convincing fashion, 27-20.
New York bring a deep, talented roster on both sides of the disc and will be a true test to this Glory roster.

The Empire are a team that require no introduction- a deep and talented veteran lineup; coming off an undefeated 2019 season that saw them take home their first AUDL Championship.

Boston will need to shut down New York's powerhouse attack, a feat that requires nearly perfect defensive play, especially from the marks. Look for Boston's core defenders like Ivan Tran to have major assignments in covering players such as reigning AUDL MVP Ben Jagt.

Glory were however given a boost Friday, as the active rosters note the returns of Halkyard and Cable.

For Boston, the journey in building team cohesion will continue regardless; as Haflin and others continue to build trust in each other:

Glory will take on New York Empire Saturday, July 17th at 7pm, under the lights of Medford's Hormel Stadium; in a game that promises to begin a new chapter in the classic Boston vs New York sports rivalry.