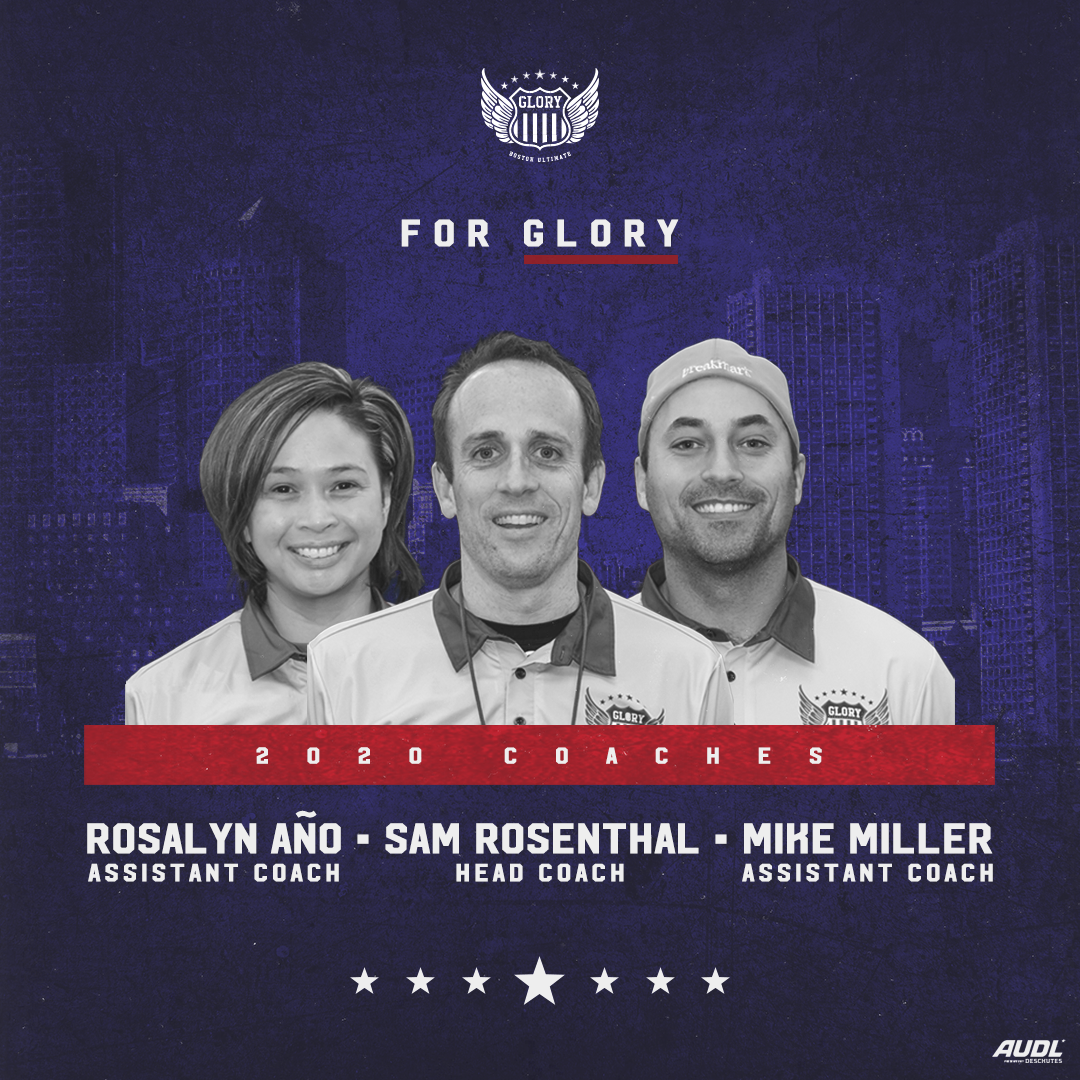 The Boston Glory today announced the appointment of Sam Rosenthal, Rosalyn Año and Mike Miller to coaching positions. Rosenthal will be head coach, with Año and Miller assuming assistants roles.

Shortly after founding Newton North high school utimate team in 1993, Rosenthal played on the 1994 US under-18 team in Colchester England. For 16 consecutive years thereafter, Sam competed for a national championship, finishing second in 1996 with Carleton College, and in 2008 and 2010 with Boston club team Ironside. Sam frequently captained his teams and was twice nominated for the Farricker Spirit Award during these years.

Starting in 2011, Sam played masters with Surly for three seasons, winning championships each year. He also represented the US in the Sakai Japan masters championship. He coached the Boston Whitecaps of Major League Ultimate for the 2014-2016 seasons, during which time the team made three consecutive playoff appearances and won one championship. Sam was named MLU eastern conference coach of the year in 2015.

He looks forward to coaching again, and to having his children join him in this latest adventure.

Rosalyn "Rosie" Año brings with her 20 years of ultimate experience, the majority of which was spent competing in the mixed division as a founding member of Boston Slow White. During her time with Slow White, the team won its first USAU Club National title in 2016 and was runner-up at WFDF World's Championship in 2018. In addition to her responsibilities as a player, Rosie spent 13 seasons as head coach of Boston College Womxn's Ultimate team. As the new head coach of Boston Siege in 2019, Rosie steered the team to its first USAU Club Nationals appearance.

With her expertise as an offensive specialist and unwavering desire to win, Rosie looks forward to bringing her energy and love of the game to the Boston Glory.

Mike Miller’s ultimate career started at Newton South High School in 1996, after which he played competitively for the University of Pennsylvania. Following graduation in 2004, he returned to Boston and co-founded Slow White. Mike has professional experience as both a player for the Whitecaps and the AUDL’s Rhode Island Rampage, and as a coach for the Whitecaps. He also served as an assistant coach the BC womxn’s team for 11 years ending in 2018.

He lives in Newton with his wife Elana and dog Ricky.

Commenting on the appointments, Glory General Manager Mat Little noted: “Not only do Sam, Rosie and Mike all have deep experience as players and coaches, they have long histories of collaboration with each other. We have every confidence that our coaching team will implement a coherent and effective style of play.”