The Toronto Rush are in good hands. The core leadership has been consistent since the team’s inception in 2013, even if the title of ‘captain’ has rotated between players. Mark Lloyd was the captain of the original Rush roster, with Thomson McKnight as his assistant captain. Both are still on the team, though Lloyd doesn’t currently hold the mantle; he spends most of his time in Winnipeg. Past captain Jeff Lindquist (also on the team since its inception) had to step down two years ago due to time constraints. Regardless, the team doesn’t lack leadership. The 2018 Toronto Rush will be captained by Thomson McKnight and Cam Harris on the O-Line, and Bomber Powell on the D-Line.

The technical roles of a captain on the Rush are simply to toss the pregame coin, talk to the refs, and help the coach manage strategy for games and practices. McKnight interacts with the refs the majority of the time, as his calm demeanor allows him to “talk to them without blowing up in their face and yelling at them.”

Every captain affirmed that Raina does most of the talking. He can shout with the best of them (and is the greatest AUDL sideline chirper, according to Cam Harris); however, he always uses comedy to avoid swamping his players with negativity: “[Sachin does a great job] recognizing that we're not playing Frisbee because it's paying our bills. It's not this grand calling. We play because it's fun and we enjoy it, and he makes sure to keep it fun,” said Harris. 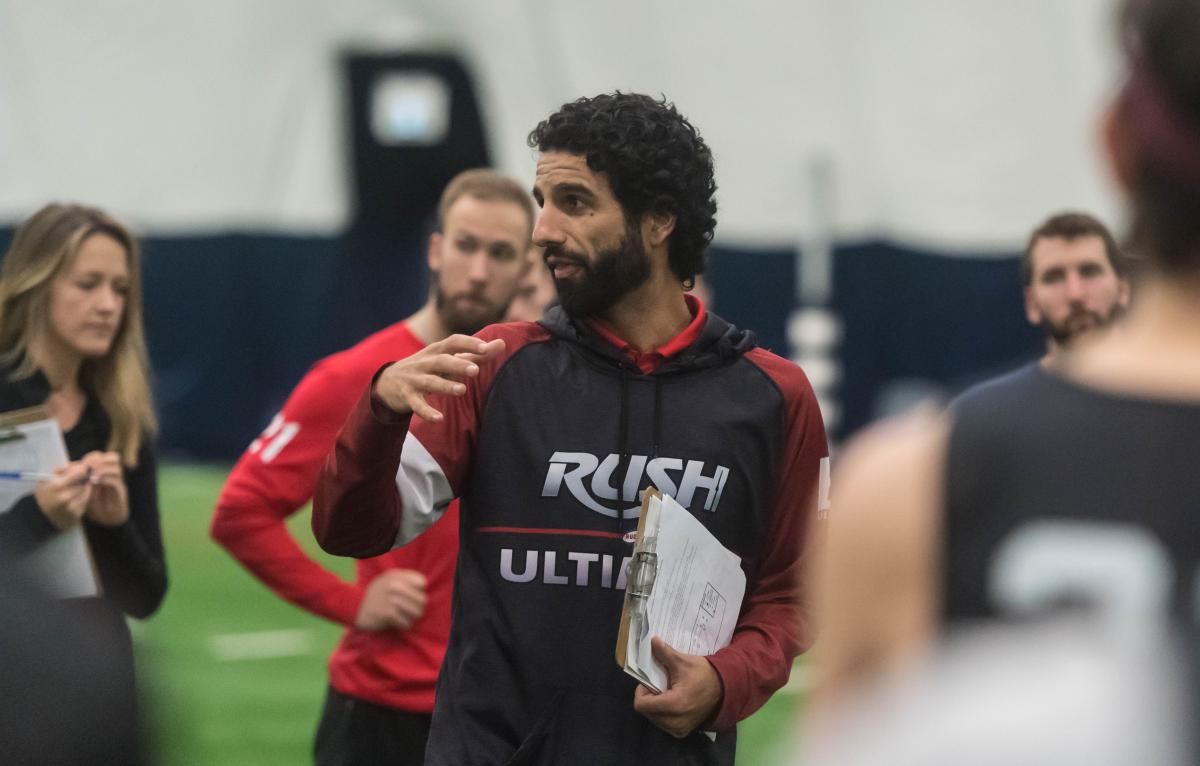 The veterans fill in around the edges. If Raina wants to communicate a strategy to his players during the game, he only has a few moments to explain it between points. Then the captains will fill in: “Thomson will jump in and say what he’ll see upfield, offensively, and Cam would give the perspective on what the defence looks like downfield and what we need to do organizationally. So Sachin will give the high-level messages, and then if it needs to get into more granularity, that’s where we jump in,” explained Bomber.

However, as we all well know, leadership goes deeper than explaining tactical nuance. Bomber and Cam Harris are emotional supernovas, capable of inspiring a frenzy at any moment if the team needs a kick in the ass. “I’m a pretty passionate person… I think it can be a pretty important thing to get your teammates fired up on the sidelines,” said Bomber, diplomatically. Bomber is purported to be the only player on the team who can match Coach Raina’s outward intensity (and perhaps even his yelling acuity).

McKnight and last year’s captain, Andrew Carroll, represent the ice to Bomber and Harris’ fire. They are always calm, quick to defuse a situation before it escalates, or take a younger teammate aside to help keep his confidence high. “We can help the young guys by reassuring them: you deserve to be here, we know you can have the ability, it's just about helping them get comfortable, giving them the confidence,” explained McKnight.

In fact, the Toronto Rush seem to be a majority youth roster these days. McKnight speculated that the team is over 50% 26-years-old or under. Despite some mainstays from 2013 (including Adrian Yearwood, Isaiah-Masek Kelly, Jonathan Martin, and Gord Harrison), the team feels young and hungry. Powell described in great depth how important it is for the veterans to stay positive with the youth: “You want to keep pushing [the young guys] to do the things that they’re good at, and we don’t want to discourage them… So when things do go bad with them, like when they turf the disc, we really need to keep upbeat with them and positive. Let them know how good they are.” 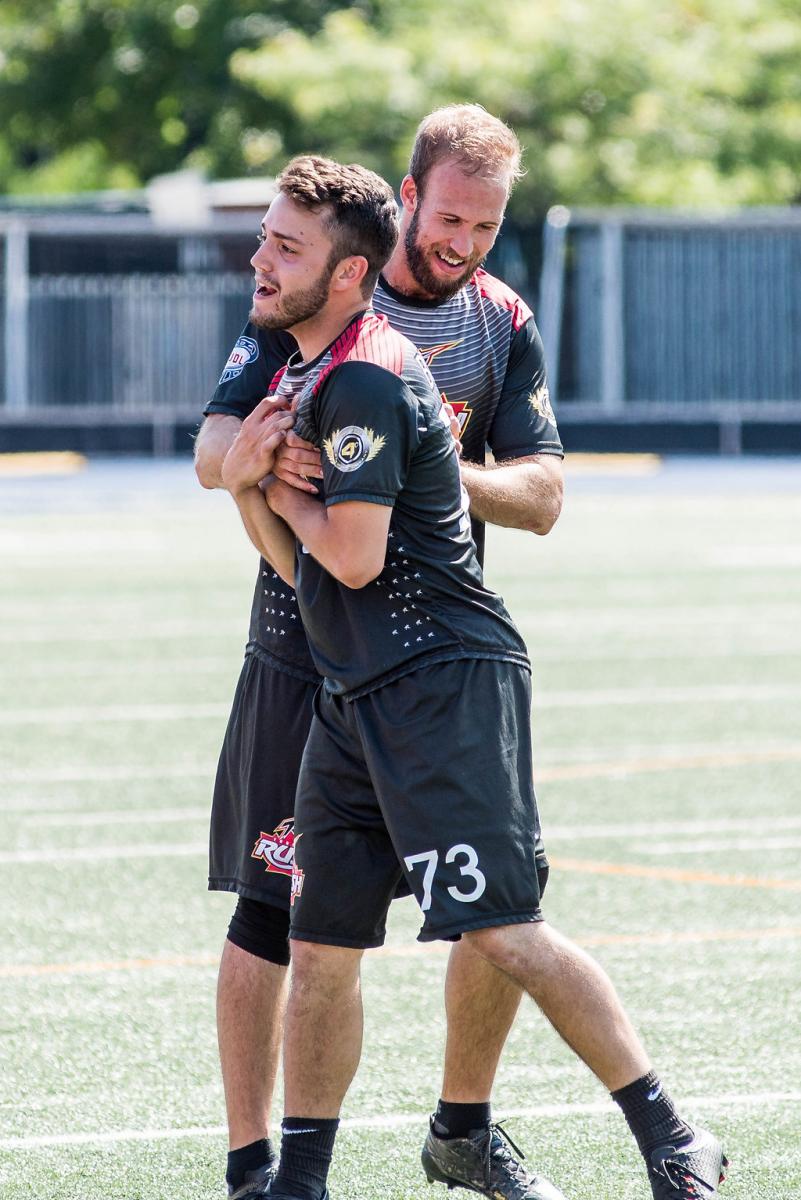 The gentle support works well with the young guys, even if sometimes they do need tough love. Mike McKenzie occasionally needs a firm hand from Raina or a veteran to get him out of his own head.

But there are more emotional movers and shakers on the Rush than just the captains. “We have a lot of leaders on our team, and you don't have to be called a captain to be a leader,” said McKnight. And the contributions from players beyond the captains are immense.

Iain McKenzie leads the team’s cheers. Ben Burelle’s silliness helps keep the team loose on the O-Line, according to Carroll. Jokes allow players to forget about pressure before the pull.

Jonathan Martin, nicknamed Martinez, is the team’s most accomplished speech-giver. Bomber remembers a significant speech from Martin in the 2016 semi-finals against Dallas. In another, Martin thundered something along the lines of, “We’re a family. We’re brothers, and I’d rather lose with this team than win with any other,” according to Bomber. When asked about Martinez in an AMA, Adrian Yearwood had an answer for the ages:

Awed, confused, a little scared... same as most people I imagine

Martin is something of a Gandalf-style speech giver: “He has those You Shall Not Pass kind of moments, and he’s pretty terrifying sometimes,” laughed Bomber. (Aside: With the J-Walkers, Martin was in fact referred to as Jandalf. Further aside: If anyone were to be a Sam-style speech giver, Bomber assures me it would be Carroll, who has mastered the heart-felt and soft-spoken style.) 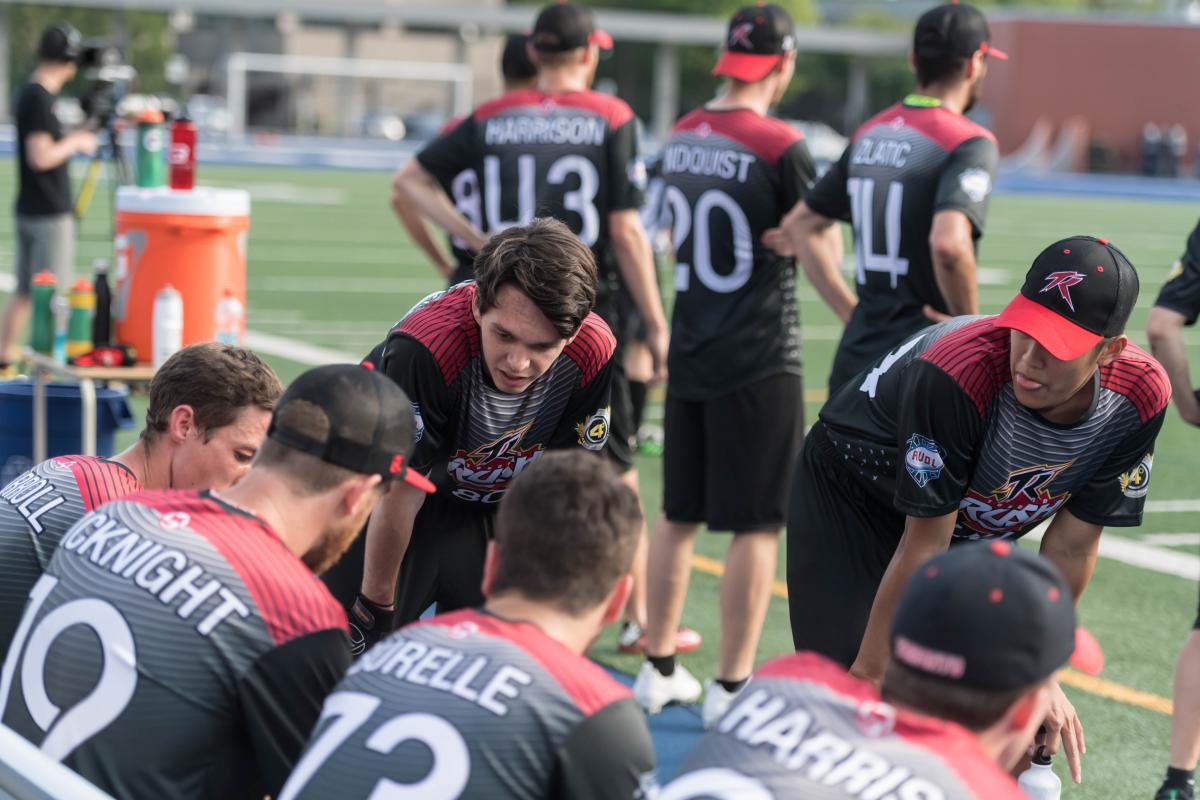 Carroll with a sidelines speech

Ultimately, the Rush are more of a leadership collective than an oligarchy dominated by the elderly statesmen. Every player contributes and has room to contribute. “I think everyone, to some extent, on our team is a bit of a leader,” mentioned Harris. That feeling of collective responsibility to the team has manifested itself in some incredible performances.

The Toronto Rush fell down 2-6 early against the incredibly talented Dallas Roughnecks in the 2017 semi-finals before coming back to win the game. According to Andrew Carroll, the team didn’t require any speeches or emotional outbursts from a leader; everything the players needed to fight back had already been instilled in them: “I don’t remember there being words spoken. Even if someone had said them, I don’t know if it would have meant anything, really… I knew, I knew we were gonna come back.” The same mentality proved valuable the next day in the 2017 finals. The team fought back against San Francisco, down 5-8 early, before eventually losing by 1. What looked at first to be be a blowout became one of the most exciting games in the history of the AUDL.

A team full of leaders didn’t require one during one of the most important moments in franchise history. For the Toronto Rush to succeed in 2018, the team will require speeches, Sachin jokes, veterans mentoring young players, Sachin explosions, and everything in between. Most important to success, however, the Rush will need a culture in which players don’t need speeches or yelling for inspiration. That’s the culture that veterans have been building since 2013. That’s leadership.