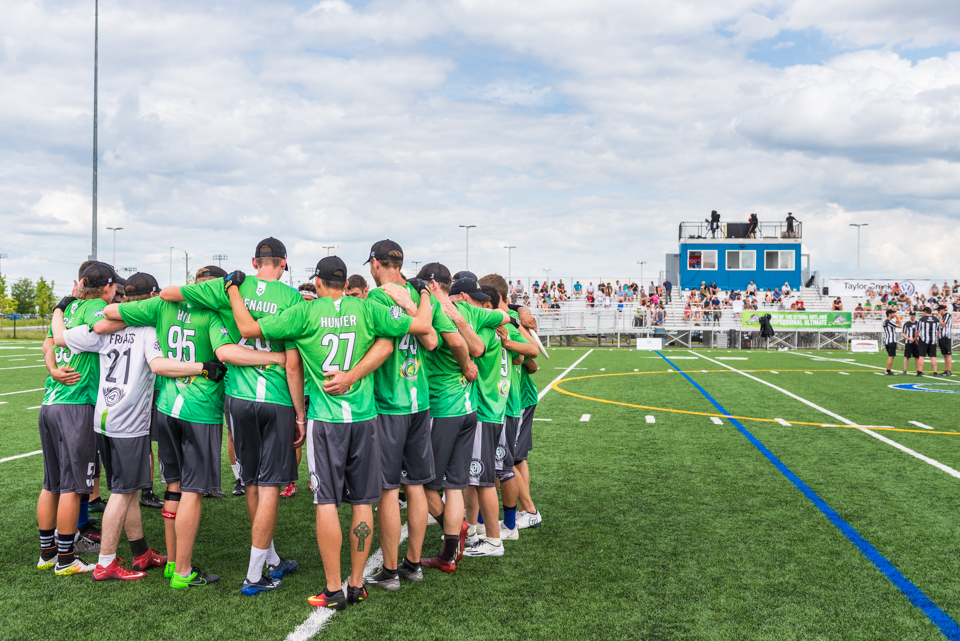 They’ve been training like fiends this off-season. The team boasts a track program, which prompts players to work on their fitness, running 2-3 times a week. Players go to the gym on their own, but they are no less dedicated. Mike Lee, a team leader, is in the gym 3 times a week during the off-season. Erik Hunter, one of two team captains, goes to 3 gym sessions a week as well. New rookie, Adam O’Donnell, has hit the gym 4-5 times weekly for the past 3 months. Hunter mentioned that Laurent Loiseau and Paul Mensah are leading the team in gym visits, according to the team tracker. Assuredly, the team will be ready coming into 2018, fighting to return to status of their first two seasons, during which they finished with a combined record .500 (14-14) with a goal spread of +18.

Top-end talent is not the issue for the Outlaws. Mike Lee, who played 6 points – 9 total minutes of playing time – in 2017 before re-aggravating an ACL injury, will return, hopefully healthy. He was one of the team’s best players in 2016, amassing 60 goals and 29 assists. Laurent Loiseau is another terrific player, whom captain Nick Boucher predicts will be a game-changing force for the team after missing much of 2017 with injuries. Furthermore, the Outlaws boast two elite offensive players in Derek Alexander and Alec Arsenault who would be stars on any Frisbee team in the world.

Arsenault is a monster who can do things like this:

Alexander is as skilled a thrower as exists in the league, and he and Arsenault have incredible wink-wink chemistry:

With multiple elite players, how did the Outlaws underperform in 2017? Boucher explains how Ottawa found itself scraping the bottom of the AUDL: “Last year was kind of a perfect storm. We had a coach, or two coaches, in 2016, and in 2017 we didn't have any coaches. Right away we kind of lost some leadership and stability. Also from 2016-17 we probably lost 10 of our more veteran players on our team, so also the leadership coming from the players was lost. So what we had was a lot of players having to absorb and step into new roles, and being asked to do stuff that they weren't necessarily comfortable with or prepared for. It was kind of trial by fire.”

Part of the problem with the 2017 roster was that there were few playmakers from the handler position for the Outlaws. Outside of Alexander and a few others, such as departed Swiss player Luca Miglioretto, the team lacked a full crop of dangerous and accurate throwers. Boucher found himself trying to take on too much, which resulted in him throwing 46 turnovers, 6th-most in the AUDL: “I was thinking I had to create more than I probably had to, which just led to a lot of throwaways.” Hunter agreed that players tried to do too much.

A positive to the thin crop of playmakers was that the situation allowed the youth to develop skills through high-pressure reps. Players like Kinley Gee, a rising star who cracked Canada’s U24 Open roster in Perth, and Matt O’Brien, had opportunities to expand their arsenals; Ottawa is looking to reap the rewards this season. Here’s Gee showing off his throwing talents with a (get ready for a lot of adjectives) perfect, IO, full-field huck that floats just ahead of his cutter’s route:

Incoming rookie O’Donnell projects as a hybrid handler (he completed a 50-yard hammer in tryouts, which he claims helped his cause in making the team). He will look to contribute to the team immediately, as he has played with “90%” of his new teammates in previous situations, especially as a Phoenix player last year and as a co-captain of Guelph with Gee. Hunter is excited about adding O’Donnell to the roster: “I think he's gonna bring a lot to this team. He's really assertive on the field, and he's very intuitive, so I think it won't be a very big challenge for him to just walk right in and just play.”

Greg Ellis, originally an Ottawa native, will join the Outlaws as well after having played for the Rush during the last two seasons. He will bring a wealth of experience and ability to his new outfit, and he’s hoping that his mindset with the Rush can help Ottawa off the field: “There's so much energy, so much intensity, so much focus that [Toronto] puts towards the game. I think that might be something I can help [Ottawa with].” He’s played with stars Alexander and Arsenault on past teams, and he’s excited to fit in wherever he’s needed. Like O’Donnell, his natural position is handler, but he’s comfortable cutting and playing anywhere on the field.

Undoubtedly, the Outlaws will have more playmakers on their roster in 2018. Hunter further emphasized that they will be implementing a new offensive system designed to maximize the personnel on the team: “The players we have are wholly capable... As long we run [the offensive system], and put guys in areas of their strengths, then I think we'll succeed.”

With Hadrian Mertins-Kirkwood returning to coach the team for the beginning of the 2018 season, the Outlaws have a plan in place for solid, consistent leadership; they learned from their struggles last season in that regard. On the field, captains Nick Boucher and Erik Hunter are in charge. Mertins-Kirkwood will serve to fill in the cracks and support them wherever possible.

Mertins-Kirkwood stressed the plan to develop from within in order to regain respectability in the Eastern division: “[In the past,] we weren't developing the depth of the team, we weren't supporting newer players." Now, the team is developing every player, especially those populating the middle and bottom of the roster. The best players add extra value by mentoring others, working directly with the newer guys and getting them up to speed, “rather than running drills by themselves.” Alexander’s wealth of throwing skills in invaluable both on and off the field.

Andy Ouchterlony, grizzled veteran and Eastern Canadian Frisbee legend, can also help provide that mentorship: “Having a player like [Andy] to teach some of our younger cutters and just kind of share the knowledge that he has is awesome. He's just a natural leader for the cutters on the team,” says Boucher.

So Ottawa will have more talent, more concrete leadership, and a deeper roster in 2018. Of course, Ottawa isn’t the only team that’s improving in the Eastern division. Toronto and DC will be as strong as always, Montreal is coming off of a terrific season, and New York made some big additions, including the legendary Beau Kittredge. On one hand, the Outlaws are excited: few of them have ever seen Kittredge play in person, and he carries more celebrity than most in Ultimate. On the other hand, he’s Beau Kittredge, 4-time (consecutive) AUDL champion (winning every title since he joined the league), and the Outlaws have to play against him.

Lee, Boucher, Hunter, and Mertins-Kirkwood all mentioned that the team would need to spread their talent across both lines, especially in order to contain offensive stars like Kittredge. Arsenault was the team’s best player last year, playing on the O-Line, but Ottawa is considering following Toronto (Isaiah Masek-Kelly) and New York (Jeff Babbitt) in moving one of its biggest, best players to the D-Line. The Outlaws haven’t yet set their lines, hoping to keep their rotations dynamic and flexible for the seasons’ varying matchups. Look for the D Line not only to record more blocks this season, but also to convert on more scoring opportunities.

Ottawa knows that making the playoffs is a tough sell in the rapidly improving East, but nothing is set in stone. I asked Mertins-Kirkwood if it was likely, and he responded diplomatically, saying it was “possible.” But the excitement is palpable. 2018 will see the Outlaws return to the Carleton University field in the center of the city, almost entirely due to fan desire. The crowds will have an on-field product of which they can be proud.

Team leadership is trying hard to set attainable goals, focusing on granular and achievable improvements rather than only seeing the big picture: “If you’re constantly staring at that playoff spot, are you covering your guy?” asks Hunter. The process is a daily grind. Hit the gym. Hit the track. Hit send on a snap. Make the playoffs? Don’t count the Outlaws out.