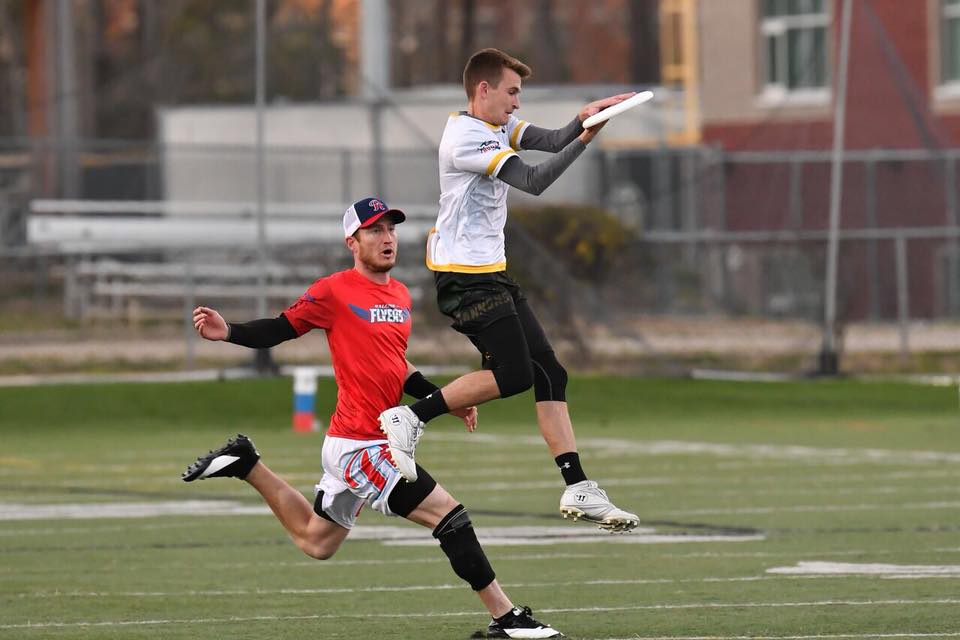 Both Raleigh Flyers coaches Mike DeNardis and David Allison mentioned to me before the season that they don’t want Jonathan Nethercutt to Mischa Freystaetter to be the only developed tool on their offensive belt. The Flyers barely used that connection on Saturday, instead opting for a more even distribution among their many talented parts. To them, it’s important to not lean too heavily on their stars, as that makes the Flyers easier to scout for opponents. Raleigh is learning from its mistakes at the end of 2017; Nethercutt threw 10 assists and scored five goals, but the Flyers were still eliminated pretty convincingly by the Roughnecks in the South Division championship last season.

In game one of the season against the Tampa Bay Cannons, Raleigh showed just how dramatically the team will emphasize an organic balance on their O-Line. Nethercutt frequently set up in the stack instead of as the lead handler.

“We’ll probably utilize Nutt in some different ways [this season],” said Allison, before extolling Nethercutt’s abilities beyond standstill throwing. In fact, Bob Liu set up as the lead handler for much of the game, throwing a team-high 41 completions compared to Nethercutt’s 37. Liu also finished with zero turnovers. He will be an important piece for the team in 2018.

Jack Williams – finally healthy after injuries cost him most of 2017 – proved to be as dynamic as advertised, finishing with a well-rounded line of four assists, two goals, and two blocks. Jonathan Helton led the team with five assists. Both are cutters, though both are capable at defining an offensive system with their throws. Their talents will also serve to lessen the load on Nethercutt throughout the season. Allison stressed repeatedly that they were happy taking what a defense offers. No defense has enough athleticism to shut down the entire cutting core of Freystaetter, Fairfax, Helton, and Williams. Raleigh will lean on whoever has the best matchup that night.

Development of the supporting pieces is important, but Raleigh has to make sure that their superstars have enough chances to make winning plays throughout games. It’s a balance. On top of Nethercutt’s slightly changed role, Freystaetter finished with only 1 goal. It’s a long season, and one game is nothing to fret. Raleigh won fairly handily, and their offense showed just how multifaceted and frightening it could be.

Speaking about frightening, did Jacob Fairfax come back bouncier than last season? DeNardis mentioned before the season that one effect of having Mischa would be that Fairfax would see weaker defenders than he did last year. If Saturday is to be any indication, it doesn’t matter who’s guarding him. Bradley Seuntjens, Tampa’s top defender last season, spent much of the game against Fairfax. But he, uh, had some trouble against Fairfax in the air. This is ridiculous.

News of the Cannons decline has been greatly exaggerated. They are going to be a force this season. With Bobby Ley, Andrew Roney, and Cole Sullivan on offense, they have as much throwing talent as any team in the AUDL. Furthermore, Tampa Bay’s increased focus on communication yielded immediate returns. Both lines reported great awareness of every play call, and pullers on the D-Line often had 8-10 seconds to spare before they could pull the disc. “Every single play call and defensive set we had from the sideline to the field was met with diligence and execution,” said Tampa Bay Head Coach Andrew Roca. Everyone being on the same page will be a huge advantage for the Cannons. They also added some secret weapons.

Tampa Bay has a new dynamic duo on offense: Nathan Vickroy and John Taylor. Vickroy is a terror when cutting deep, able to lay out for discs that he has no business catching. He’s a ridiculous thrower, who scored several assists on arcing, crossfield shots.

Vickroy’s early returns in Tampa Bay are nothing short of perfection. Coach Roca described him as the type of player you can “build a team around,” and the goal is to continue feeding him increased responsibilities as the season continues. Roca stopped short of calling him the offseason’s best addition, however.

John Taylor – a rookie – finished with eight goals against Raleigh. He was unstoppable, even against Raleigh’s superstar-studded defensive line. Tampa Bay will intermittently add college standouts to their roster throughout 2018, with each Floridian college star playing perhaps only a game or two during the season before playoff availability. Taylor, however, will be with the team all season. If Taylor is only an appetizer of what’s to come, the Cannons will not have a talent deficit against anyone come playoff time.

The Flyers added more players from the Cannons than just Freystaetter. Jakeem Polk has been playing with Ring of Fire for a few seasons, and the team is overjoyed with the progression of his game. He’s more aware on both sides of the disc, and his throwing is improving dramatically. Andrew McKelvey projects to be a D-Line alternate for the Flyers, after being an important player both ways last season for the Cannons. Damn, the Flyers are deep. Freystaetter may not have had a huge statistical game, but coach Allison isn’t worried about him finding his stride.

“He's going from a place where he was asked to shoulder a ton of the load, particularly when the Cannons had the disc," Allison said. "He's started to understand that he doesn't have to be the only guy. Having him find his moments and pick his spots will take a couple games.”

Raleigh has an unfair amount of talent. Their defense boasts stars like Justin Allen, Shane Sisco, and Noah Saul. Hunter Taylor is back from injury, and his football-style intensity (and athleticism) will ensure the D-Line is always revved up and ready to go to war. Taylor would leap through a brick wall just for a chance at a disc, and he can feasibly challenge Freystaetter in the air. Polk will play majority with the defense as well, and coach Allison raved about his progression and ability to translate his improved game into game situations. Now it seems like Terrence Mitchell will play most of his points on the D-Line, after spending much of his time on the offense last year? Raleigh has more talent on their D-Line than most teams have on entire rosters.

Roca is officially in the lead for "Most Stylish" in the AUDL so far. I will tolerate no arguments to the contrary. Mike Ditka meets Wes Anderson in this groovy coach. Roca says he may dress up as a new coach this upcoming game, though his moustache – which he’s been growing for months purely for this game – might have vanished from his face by the time game 2 rolls around.

Tampa Bay is terrific at developing talent and putting players in positions to succeed. After Mischa’s 95-goal season in 2016, he moved to the D-Line in 2017. Jordan Huston practically replaced Freystaetter’s O-Line contributions last year, catching 80 goals. Huston missed the first game against Raleigh, but speedster Tanner Repasky stepped up with a performance no one outside of Tampa Bay expected. Roca didn’t even expect Repasky to play this well, this quickly. Repasky played 29 points on the O-Line, which is already more than a third of his total points from 2017. He caught 4 goals and threw an assist during his perfect, 0-turnover, 0-drop night. He will be an important cog in the O-Line this year, and Repasky looks ready to contribute.

It is a pleasure to have the AUDL back. Can’t wait for next week!