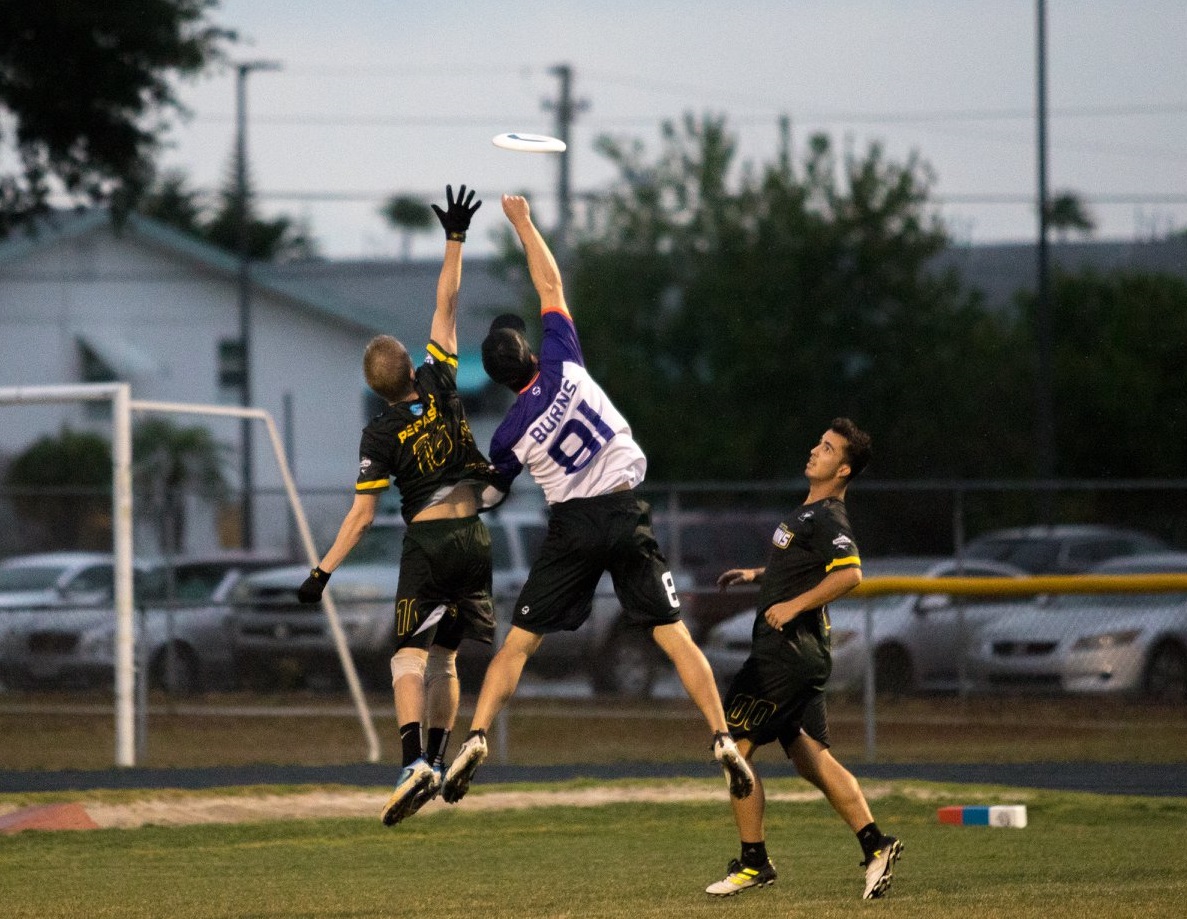 We drove through rain all the way from Atlanta to Gainesville, FL. One of our vans broke down in Gainesville but it was nothing some duct tape couldn’t fix. We arrived in Tampa Bay with a storm looming from the Gulf. The worst of it hit during our warm ups. It was not enough for a delay though. In retrospect it was good to face that challenge at a time where we could make adjustments.

The wet and windy weather continued into the 1st half.  We won the flip and got downwind offense to start! We scored on our 1st possession of the season thanks to Josh Bush riding the elevator up to the top floor. He seemed to keep rising for a supernatural amount of time before reeling in one of Matt Smith’s game high 5A.

The Hustle defenses were in top form. We generated break chances on almost every point but only cashed in one break. That one break had an exclamation point provided by a big sky from Jojah's Mason Cary.

We gave one break back on a long point that saw 4 empty offensive possessions. The quarter ended tied at 3-3.

Starting Q2 on defense we generated 3 break chances before Coach Knowles used a timeout to make substitutions. That line eventually punched in the break to get to 4-3. We were able to go back-to-back with a second break for a 2 goal lead.

The Cannons were able to stabilize the game for a while as the teams traded points. Then they were able to capitalize on a miscue on a reset pass to break us back ending the quarter at 6-6.

The rain and wind eased up around halftime. The Hustle tripped up on offense on the 1st point leading to a Cannons break that also gave them their 1st lead.

The Hustle defense would get a break back 4 points later. Coach Knowles again effectively used a timeout to aid the conversion.

The Cannons are a fiery squad and the kept fighting. They took advantage of back to back Hustle misfires to stretch a 2 goal lead at 10-12. The Hustle showed a lot of toughness to get a much needed hold on the next point in which both teams had 3 or 4 opportunities with the disc.

The Cannons were able to end the 3rd quarter by corralling a disc tipped by a Hustle defender beating the buzzer and preserving their 2 goal lead 12-14. With Tampa Bay starting on offense to start Q4 they had to feel good.

Atlanta started on defense down 2 breaks but after a strong huddle energy was good and legs felt fresh. The Hustle put the pedal down and rattled off 3 straight breaks to take the lead and stun the Cannons. The Hustle had a chance for a 4th break but weren’t able to convert. A confident Hustle offense smoothly worked it up the field to put Tampa Bay further in a hole. The Cannons were receiving with a short clock down two scores. They needed to score quick and our defense knew it. We fended off a deep shot and converted the break for the nail in the coffin.

The Hustle vets were excited to get their first win ever in Florida. The influence of the Coach Knowles tenure was clear: well conditioned, deep and balanced stat sheet, smart defense, selfless offense, good use of timeouts and a supportive and tough sideline. The Hustle defense capitalized on the conditions to generate a lot of break chances. The conversion rate was improved from last year but still has loads of room to improve next week.  Tampa Bay is a talented team that needs time to build chemistry and adapt to a new approach. Their best ultimate is ahead of them. We expect that when we meet again in Atlanta on April 21st for our home opener that it will be another back and forth four quarter battle.