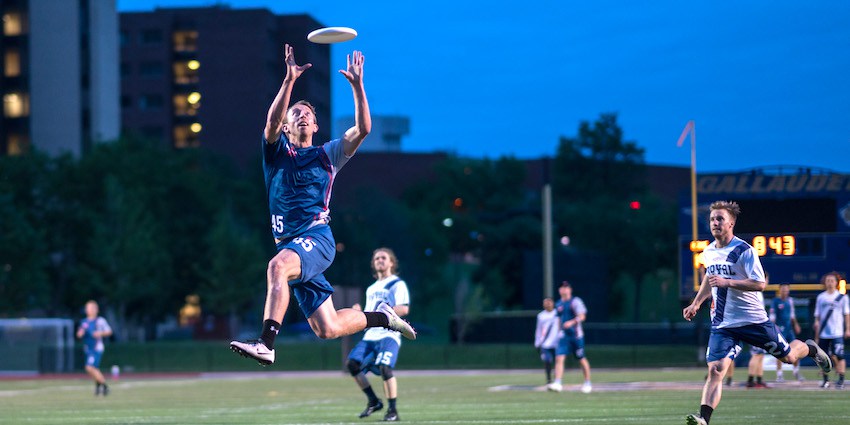 The Breeze return 20 players from the 2017 roster, along with four additional AUDL veterans and 12 AUDL-rookies. The team is among quite a few across the AUDL that changed measurably this past off-season. One team that did not change too much heading into 2018, though, is the Montreal Royal.

SPECIAL NOTE: Follow us on Twitter and Facebook regarding the status of Saturday’s game due to weather
READ ALSO: A FRESH START FOR THE BREEZE IN 2018
LISTEN: BREEZE PODCAST #34 — ROSTER ANALYSIS WITH TYLER BYRUM

20 returnees is a fairly high number, but some notable players will not be back. Five of the 11 leaders in points played for the Breeze a season ago are gone. This makes for some anticipation and excitement about who will step up.

“There are a number of new faces, but our team grows stronger each year. Especially with the continuity of Coach Darryl [Stanley] and aid of Dutchy [Ghesquiere], we’ve got a serious program that is more dangerous than any one of our components,” Brad Scott said.

Considering that a consistent roster can never be taken for granted in professional ultimate, the Royal impressed over the offseason as they retained 10 of their top 12 players.

Most important of the Montreal returners is 2017 AUDL 2nd-Team honoree, Quentin Bonnaud. In his first season with Montreal he recorded an AUDL East-high 55 goals and 29 assists. He has been a deadly cutter for the Royal who can’t be stopped, at only 22-years-of-age. The Frenchman had a +77 plus-minus last year, good for fifth best in the entire league.

Often throwing the disc to Bonnaud is Stève Bonneau who was fourth in the league with 51 assists. Known for being able to release the disc at any point against the mark means that anyone on the team can be open. He missed the playoff match between these two teams a year ago.

“Montreal has a model program. They have a tremendous product on and off the field that extends far past just their players,” Scott said. “They play a very dynamic offense, not afraid to attack the break side with big hammers and a threatening defense with a young explosive squad.”

These two teams will square off on Saturday to kickoff their 2018 campaigns. A year ago the Breeze (No. 2 seed) defeated the Royal (No. 3 seed) in a wet and delayed affair in the playoffs. It was not a pretty contest, but the Breeze took advantage of the conditions early and never looked back. But as previously stated, this is a new team for DC, with different characters facing off against a talented Royal squad.

A handful of roster spots have been left open for the Royal, with the report that more international players could be on their way. Late in the year, Montreal pulled it all together to make a playoff run. This season they should be a favorite to get back.

“Last year I think their early season results didn’t quite match up with the late season results due to all the new players from so many different parts of the international ultimate scene coming together,” Stanley said. “Now they are a playoff team with comfort and confidence.”

As for the Breeze, a lot will be revealed during game one of the season. Enough pieces coming back from a year ago still make the offensive unit a dominant force in the Eastern Division. Lloyd Blake, Nathan Prior, Max Cassell, and Jeff Wodatch will return on the O-line. Former Pittsburgh Thunderbird and Raleigh Flyer Xavier Maxstadt is a notable addition to the squad and should be getting some solid reps as well, possibly even in his Breeze debut.

“Xavier is a great prospect for us with a lot of AUDL experience and top notch college experience,” Stanley said. “I hope he can deliver a signature throwing performance for us [in the first game].”

The Breeze defensive unit returns standouts Delrico Johnson and Matthew “Rowan” McDonnell, but the handler depth on the other side of the disc is a little lacking. However, the much anticipated return of three-year veteran Brad Scott, who missed all of 2017 recovering from double hip surgery, will certainly strengthen things this year.

“The time since surgery has been quite reflective, going from thinking my days with the Breeze were over and that I’d finally have free time again to get back into backpacking, climbing, and traveling, to realizing that Ultimate opened up a happiness for me that I struggled to find elsewhere. Back at full strength, playing with the Breeze is incredible. I feel like I came off a really hot 2015 season and the injuries kept me from reaching full potential in 2016. I’m excited to pick up where I left off and keep this train a rolling,” said Scott.

There is no question that the defense will get some stops. The question is, will they still be able to punch the disc into the end zone for enough breaks?

The Breeze are riding a 14-game home streak coming into this contest, the longest in the AUDL.

Both teams are coming off playoff appearances from a year ago, the Breeze with their second in a row and third overall, and the Royal’s second. With the Toronto Rush reloading for this season and the wave of talent flying into New York, it is likely that either the Breeze or the Royal will be left out. That makes this early season match-up all the more important.