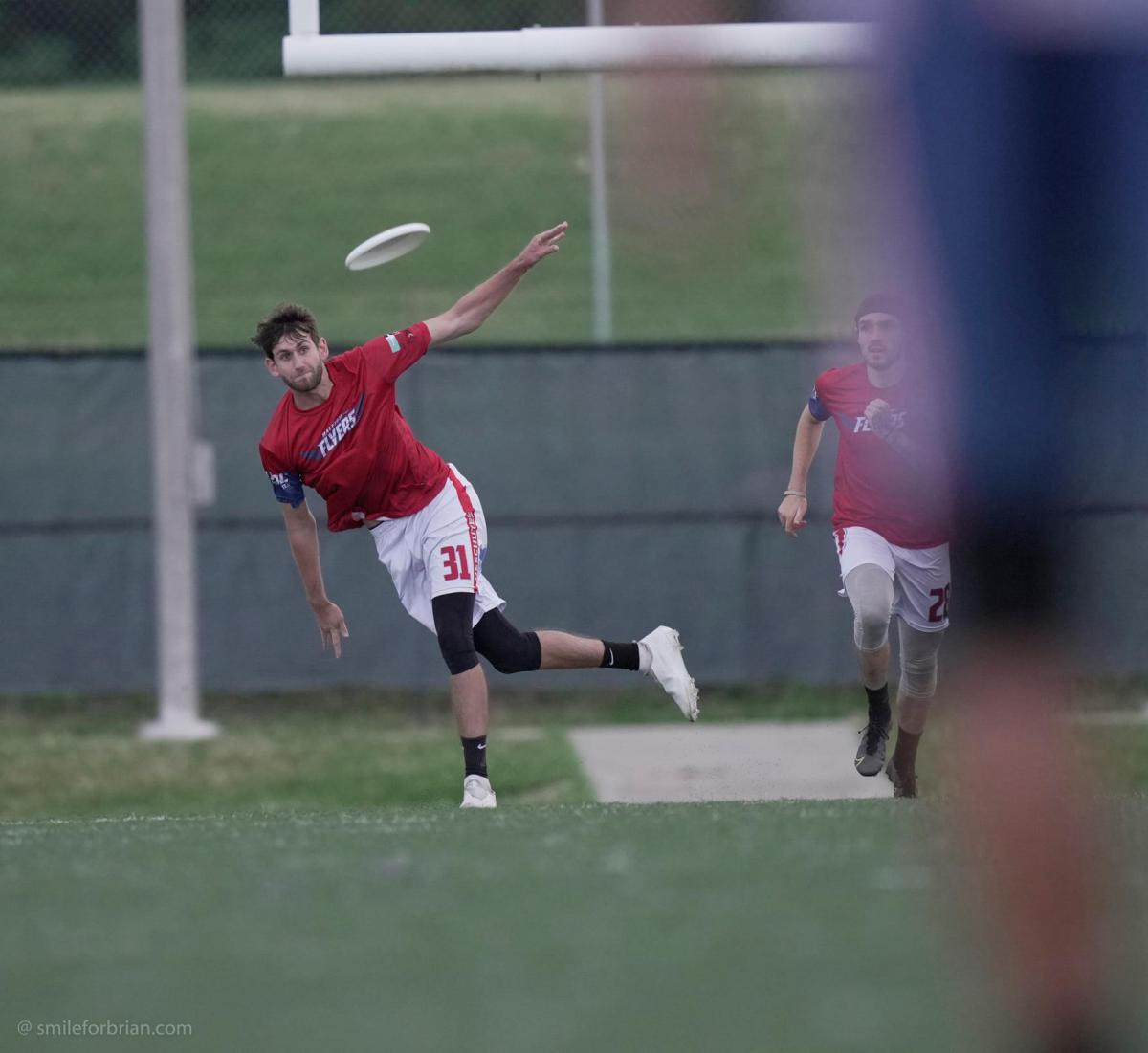 Three weeks into the season Raleigh still sits without a win in the Atlantic Division. The difference of two or three points sat between wins or losses for Raleigh the last two weekends, and despite the Flyers current position at 0-2, Raleigh’s offense appeared to be in much better form this weekend against DC. With a brand new Boston team coming to town that showed its own vulnerability last Saturday, Raleigh has a chance seize a needed win at home. A Raleigh win this will mean containing one the best new throwers in the Atlantic Division. Ben Sadok has been an important offensive motor for Boston and that’s no surprise to anyone who has followed elite teams from the Boston area in the last six years. The short crafty lefty has been the offensive motor for Glory nd his keen field awareness has been on full display in the opening weeks of the season. Sadok has had a penchant for putting on a high scoring performance so far with 8 goals and 5 assists in two games. Containing Sadok and forcing a more even distribution of possessions out of Boston’s offense will be key pieces of challenging Glory this Saturday.

After an understandably slow start against Atlanta in week one, Raleigh’s offensive unit returned to its high scoring form that we’re used to seeing. DC had noticeable trouble containing Raleigh’s receivers early in the game last Saturday, relying on their own fast paced and high scoring unit to keep up with the Flyers, rather than attempting to control the pace of the game as Atlanta did with their defense. Jacob Fairfax racked up four goals for the Flyers while Eric Taylor had an impressive six assist night. Anders Juengst also continued his great 2021 debut with four goals of his own. Across the board, Raleigh just looked cleaner. Raleigh’s handlers weren’t hanging up throws and were more precise with their hucks. Over the last couple of seasons Flyers have been a team that have thrived off of motion whether it comes from receivers or handlers. The addition of Matt Gouchoe-Hanas and the shift of Sol Yanuck onto Raleigh offense has changed how the team can tackle situations when receivers are clogged and in the red zone.

“It has been really nice to have those guys along,” said captain Eric Taylor. 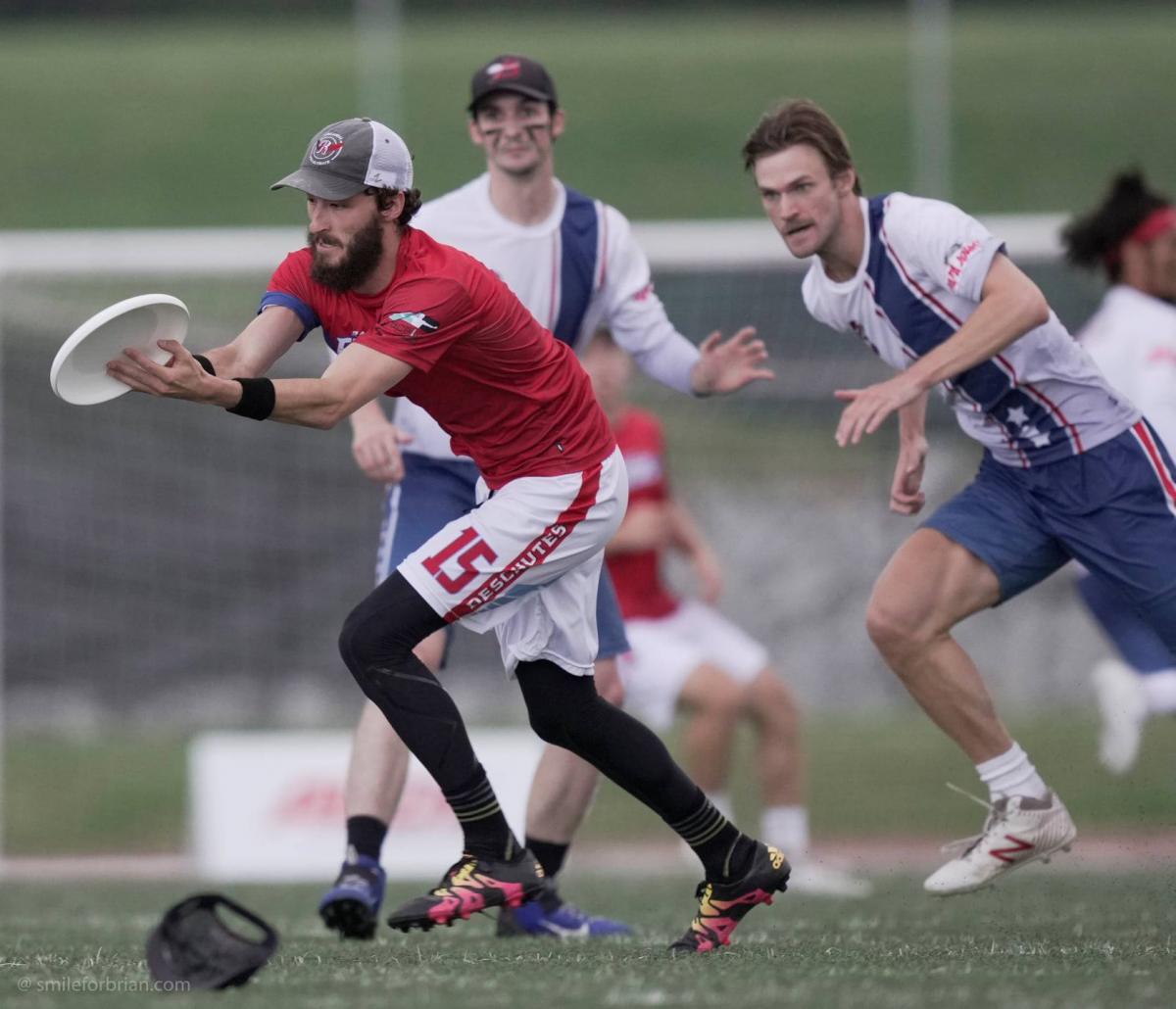 “I think having them fit in together in setting tempo for an O line on the AUDL field has been a growing process and they are continuing to improve.”

Of course, Raleigh did not ultimately deliver a win. There were still key errors in the third quarter that allowed DC to close the slim lead that Raleigh possessed and the Breeze surged in the 4th quarter behind blocks by Houston Parks and Quinn Bergeron. But the Flyers didn’t crumble under late game pressure and were able to stay within striking distance of forcing overtime. Two losses that could easily have been wins doesn’t typically sit well with a team full of players that have an incredible competitive history.  Eric Taylor praised the team’s improvement with an eye on both the growth of Raleigh’s personnel, and the need to continue dialing in execution.

“When we were playing at a good pace and modulating our throwing aggression I felt like we were dynamic and difficult to stop,” he said. “We avoided situations where the defense was really applying a lot of pressure on us, and made improvements in not turning the disc over. We still need to keep cleaning things up as a team, but I'm optimistic that we are headed in the right direction.” 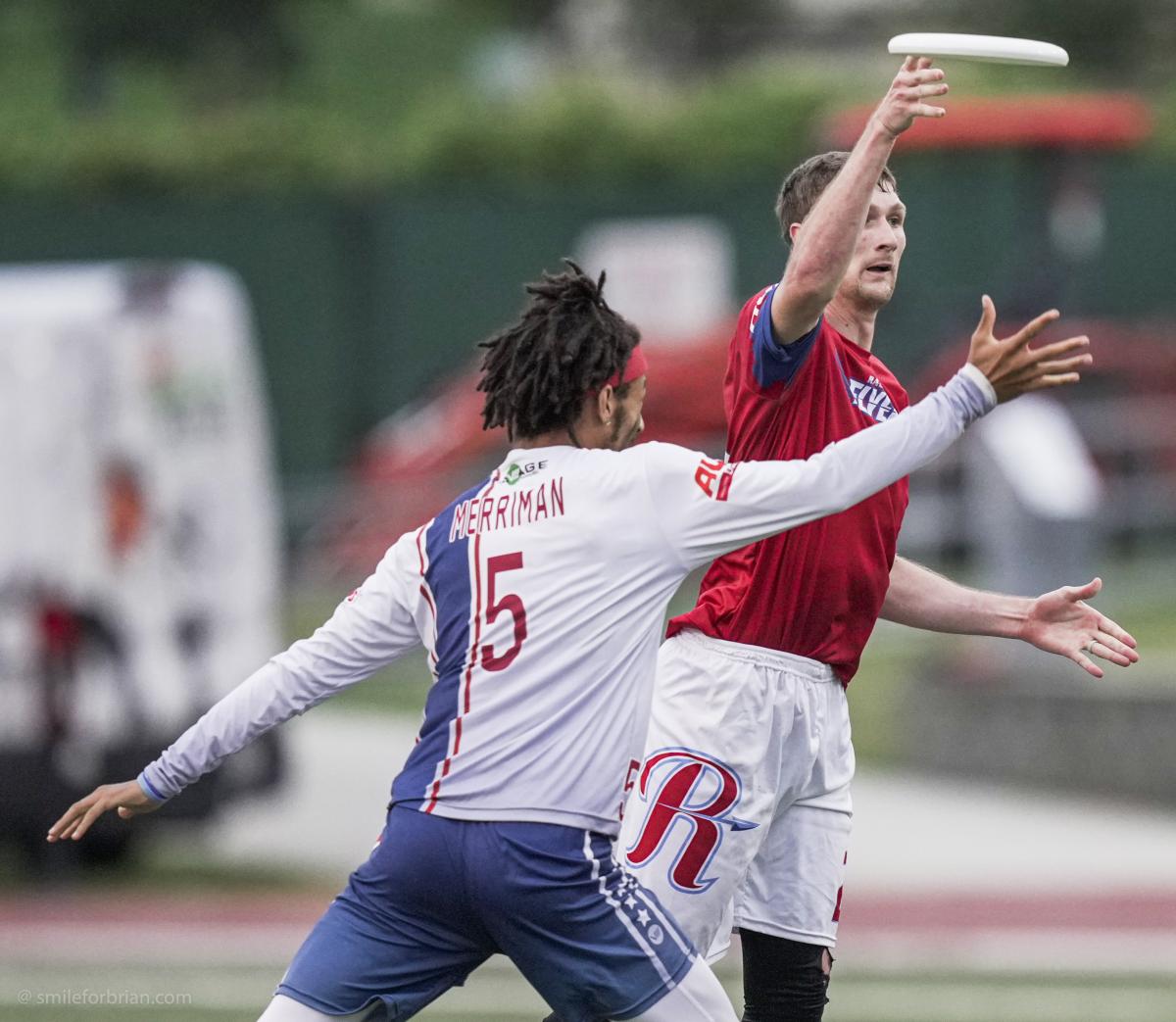 Defense Continues to be Raleigh’s Ace

It’s been a consistent concern for past Flyers teams. How do you maximize offensive production on an AUDL field with so much talent without draining your ability to convert breaks? In two games Raleigh’s defense has proved itself to be more than capable of containing offenses and converting turnovers. The Flyers converted four breaks in the first half against DC cementing the lead that they held until late in the third quarter. On a turn, the combination of Connor Russell, Elijah Long, Seth Weaver, and Noah Saul has been reliable and possession oriented.

This wouldn’t be the AUDL though if there weren’t a few highlights outside of the playbook. Flyers rookie Trevor Lynch made an incredible diving catch in the back corner of the end zone. Originally from Philadelphia, Lynch was a part of NC State’s resurgence in 2019 and has been growing into the star defensive role he’s taken on for Raleigh. While no stranger to teams in the Triangle, 2021 marks the first season that Lynch has played with this specific group of Flyers players.

“It's a cast of guys that are almost all new teammates for me, and developing some of the chemistry with other young guys and vets has been really cool,” said Lynch. 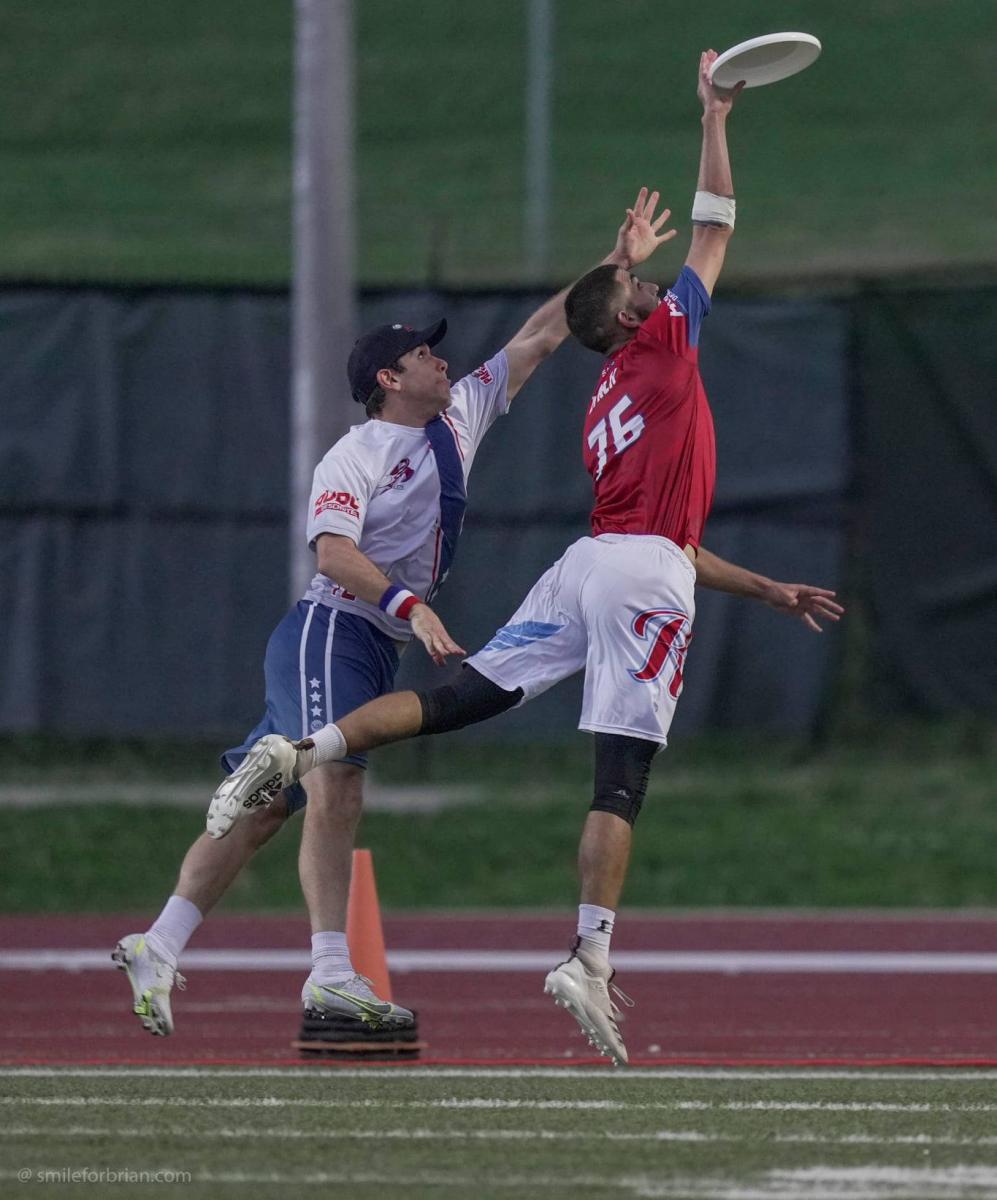 “Strategy wise it's definitely different than previous teams I've been on. There are just so many players that are great at moving the disc quickly and pushing the pace on offense, which has forced me to process how I'm setting up cuts a little faster. It's been very humbling and nice to have to slot into a role on this team only because I haven’t had a specific role for [NC State] Alpha in our most recent seasons.”

As for the goal Lynch said “I wasn’t prepared to go up for it right away but it was a very pretty throw.”

For Boston, last Saturday was their first experience meeting a defense that could steal away the initiative of a game (Boston fell to Atlanta 21-19). Boston and Raleigh have the offensive chops to keep pace with each other, but also the vulnerability to fall victim to execution errors down the stretch of a game. Without their top receivers - Orion Cable and Tannor Johnson - Boston will have to get creative to keep up with the tempo that Raleigh demonstrated last weekend. They will still have some striking power in their handlers - Willie Stewart and Henry Babcock have been big contributors in Boston’s backfield. Also traveling with Glory this weekend is Chris Bartoli, an exciting downfield defender capable of matching up with Jacob Fairfax. But without Johnson and Cable, the receiving core of Boston is pretty hollowed out. All of the advantages seem to point Raleigh’s way for the team to continue to grow and earn a much needed win.

6: The number of goals registered by Jacob Fairfax this season.

8: The number of assists registered by Ben Sadok this season.

10: The number of assists registered by Eric Taylor this season.

12: The number of turnovers registered by the Flyers against DC.

44%: The completion rate on hucks from Raleigh this past weekend against DC.

94: The number of completions by Ben Sadok this season.

95% The completion rate on red zone possessions by Raleigh this past weekend against DC.