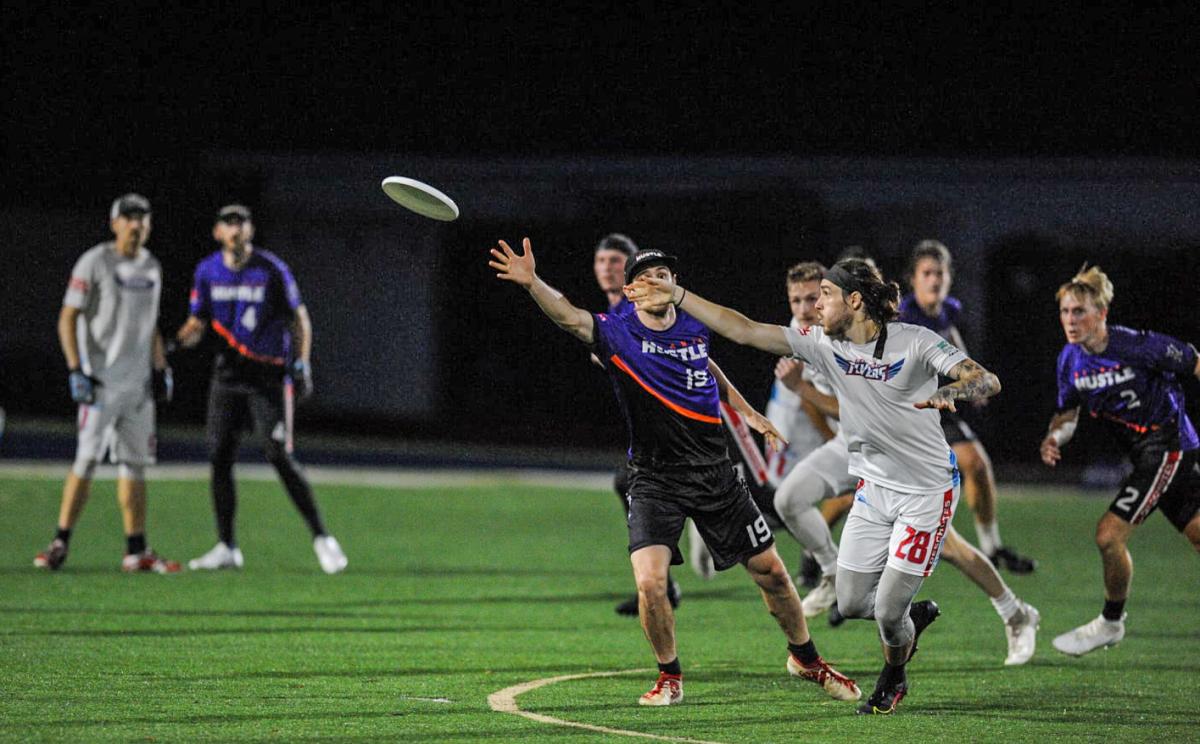 There is no situational equivalent in ultimate to the AUDL’s double overtime. You could draw comparisons to double game point in club, but the two situations are vastly different. There were high expectations for the quality of games that would come out of Raleigh's doubleheader against Boston and New York. By the time it was over Raleigh had split a narrow single digit win over Boston with a narrow single digit loss to New York. Against both teams the Flyers overcame early mistakes to take the lead late. Against Boston, the Flyers got back on serve late in the fourth and were spared any chance of an overtime comeback as a huck from Boston’s Tannor Johnson sailed into the turf beyond a bidding Ben Sadok.

The game against New York was just as dramatic, as Raleigh had to overcome early mistakes and march the disc down the field in the face of New York’s impressive defensive stars to tie the game 21-21 and force overtime. In overtime Raleigh gained a 23-21 lead. New York nearly gave Raleigh a third goal as a low, inside backhand throw from Ben Jagt hit the turf out of bounds at the front corner of Raleigh’s endzone. But Jagt got the disc back for the score on a hammer thrown from Elijah Long to escape a double team, and quickly dished a score to Ryan Osgar, 23-22. With only 28 seconds to play, New York opted for a risky defensive play. They the disc on their own front end zone cone rather than pulling and risking the Flyers running down the clock.

The ploy worked as Eric Taylor lofted up another hammer to the far side of the endzone that was blocked. A few thrwos later, Ben Jagt hit a streaking Jack Williams to tie the game at 23s. Despite pulling to New York to initiate the double overtime sudden death, Raleigh still got one more chance to win the game as the Empire turned the disc on a narrow upline cut by Jack Williams. Raleigh’s sudden death line worked the disc out of their own endzone, but a backhand huck from Jacob Fairfax floated too high for a well-covered Henry Fisher. Jeff Babbitt earned the final block of the game, and as with the 2019 cross-divisional matchup, Jack Williams delivered the final score of the game on an inside flick to the hulking Babbitt for the final 24-23 Empire goal. What a weekend. What more can be said? 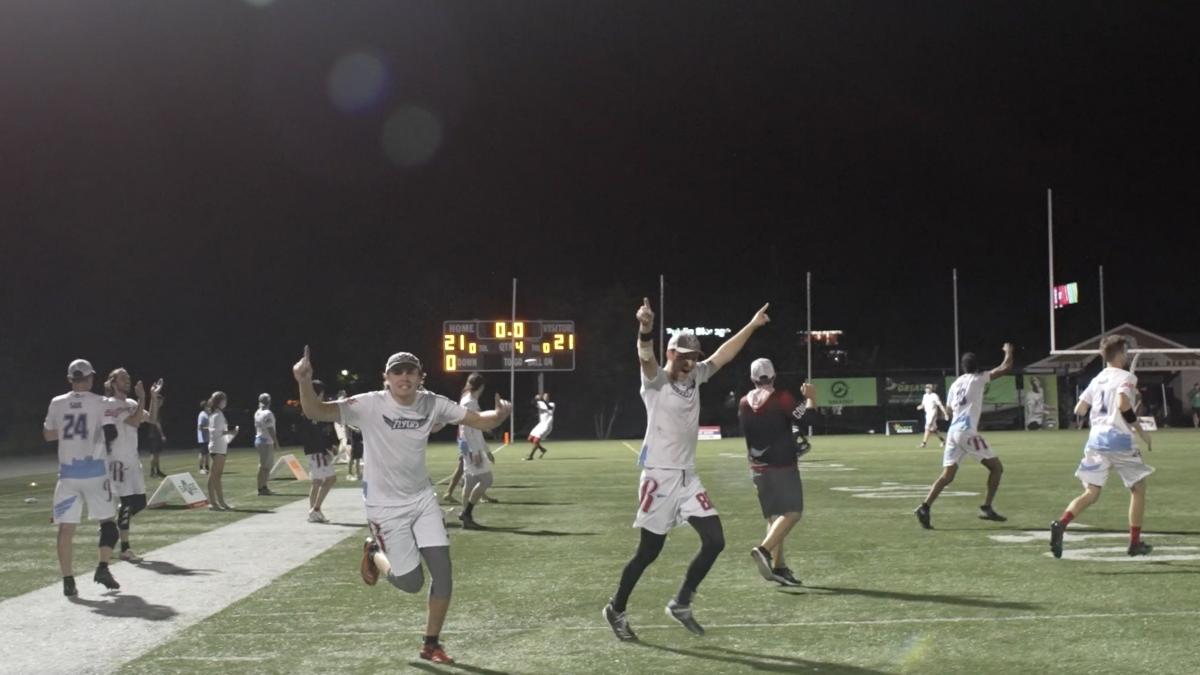 With just two games left in the regular season, Raleigh is now playing for seeding in the Atlantic Division. The win against Boston locked the Flyers into a secure playoff spot. With two games left against the top teams in the Atlantic, Raleigh can now try to pick off Atlanta and DC for favorable playoff seeding. Atlanta sits in the #2 spot with two losses to the Flyers’ 3. Even with a win against the Hustle, Atlanta will still likely hold a tie breaking win over New York against the Flyers’ narrow loss last weekend. How the division will ultimately shake out rests with Raleigh’s own performance in the coming games. A big question mark for Raleigh’s personnel this weekend will be whether Conor Russell will be cleating up. Russell has also been nursing a hamstring injury and while he maintained a key presence throughout the game against Boston, he did not cleat up against New York.

By this point the personnel on the Flyers are pretty much locked in. Last weekend saw two significant personnel shifts as Terrence Mitchell returned to the Flyers’ O line, scoring 6 goals against Boston alone. Noah Saul also got significant offensive reps filling in for Sol Yanuck against Boston. Eric Taylor, who has been battling a hamstring injury, was at full capacity last weekend on Raleigh’s O line, though he did struggle dialing in his execution throughout the weekend. Raleigh’s D line had some impressive moments this weekend. At several crucial moments they had to handle critical possessions by working the disc out of their own end zone.  Raleigh proved its resilience, but the marquee win against a top team was still elusive last weekend.

Atlanta has shown they are ready for a run at the playoffs. The Hustle traded wins and losses to top ranked DC, and their only other loss was against Tampa Bay last weekend. While that is a bit of a surprise considering how well the Hustle have played, most of Atlanta’s top contributors were away at the US Open with the club team, Chain Lightning. Atlanta possesses some of the best individual offensive strikers in the division. Antoine Davis, Elijah Jaime and Matt Smith have shared the scoring load for the Hustle this season, while Karl Ekwurtzel had an impressive mid-season breakout performance.

Atlanta has no shortage of size and speed, and their backfield has also improved significantly. Atlanta has not lacked for throwing talent either this season as Parker Bray has been a huge addition alongside Austin Taylor. Both players lead the Hustle’s offense in assists. The presence of Bray has helped anchor Atlanta’s O line in big games. With a robust defensive playbook, and a vastly improved offense, the Hustle will be a formidable opponent for the Flyers. Both teams will need to value defensive possessions and adjust to the pace of the game. Miranda Roth Knowles has coached a great season and presented opponents with strong zone looks that utilize Atlanta’s deep roster.

In the first game of the year those defensive looks stifled Raleigh out of the gate. But Raleigh’s offense has witnessed significant improvement. While there have been moments of shaky execution from individual players, Raleigh plays an impressive four quarter offensive game. If Raleigh can adjust to the different defensive looks, and challenge Atlanta with their own, they will find similar chances to put the game away late. All of Raleigh’s losses have been by a narrow single point, and those losses have all featured Raleigh having the disc on potential game-winning possession. The stage is set for the Flyers to rise to a big game that will likely be echoed in the playoffs. This game will be the second late season test for the Flyers and another chance to potentially set the team up for a great playoff run.

18: The number of goals scored by Terrence Mtichell this season.

20: The number of blocks registered by Brett Hulsmeyer.

24: The number of goals scored by Antoine Davis this season.

31: The number of assists thrown by Allan Laviolette this season (the highest on Raleigh).

35: The number of goals scored by Elijah Jaime this season (the highest on Atlanta).

38: The number of assists thrown by Austin Taylor this season (the highest on Atlanta),

39: The number of goals scored by Anders Juengst this season (the highest on Raleigh).