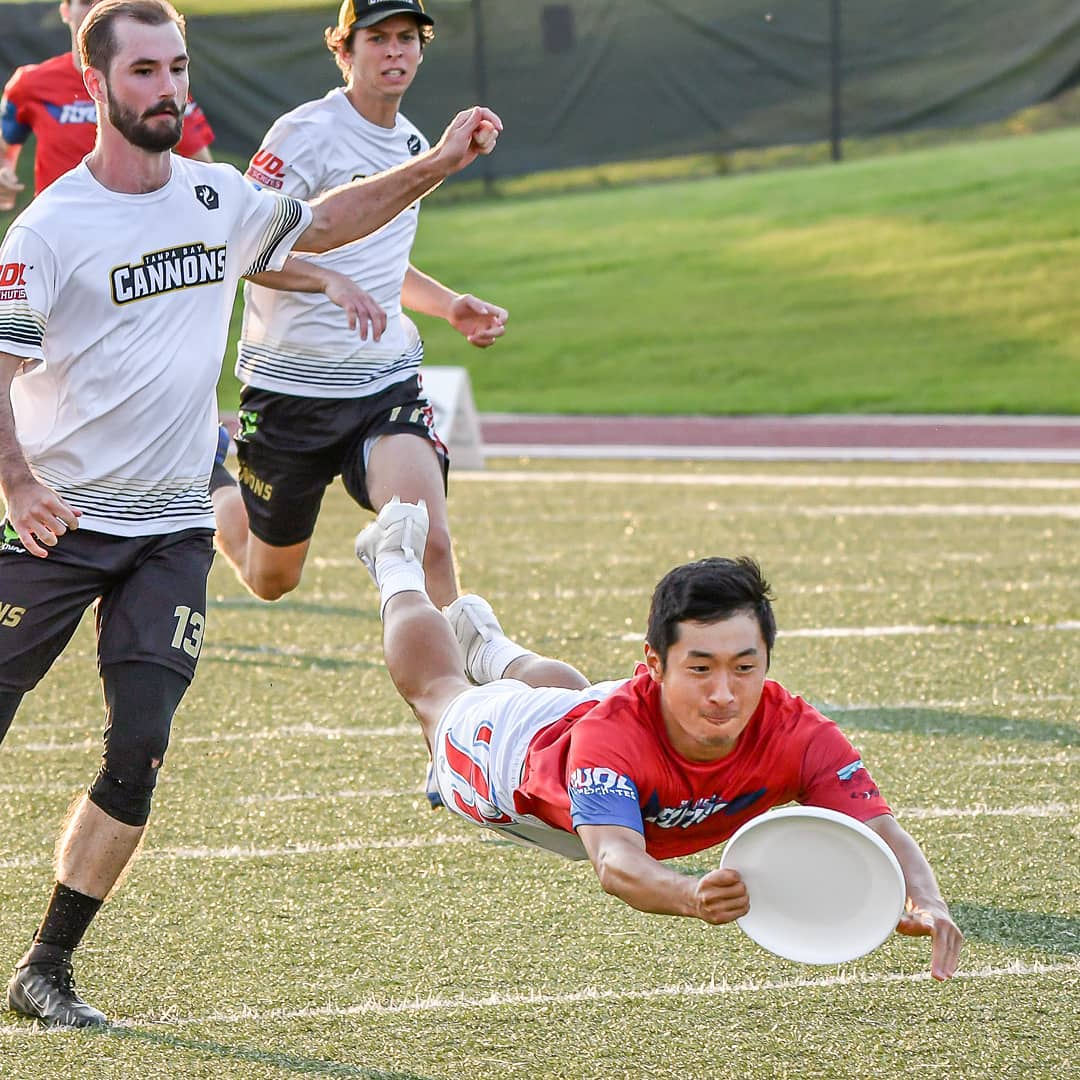 Last Saturday the Raleigh Flyers did something we haven’t seen since the golden days of 2017’s high scoring offense. In their last meeting against Tampa Bay for the 2021 season the Flyers crossed the threshold of 30+ goals scored in a single game winning 31-19. Tampa looked better on the road than they did over the previous July 4th weekend, but their D line could only really take what they were given on an occasional Flyers execution error. Raleigh’s D line offense was once again in the driver's seat for much of the game as longtime veterans Noah Saul, Josh Hartzog and Tim McAllister registered big numbers across 22 total points played. Across the entire roster it was a deep scoring night as different players found themselves being plugged into different roles within Raleigh’s offensive systems. The depth that Raleigh has displayed across the last three weekends against Philadelphia and Tampa has kept the team in a safe 4th place in the Atlantic Division alongside DC, Atlanta, and New York. The Flyers face one more new test to that position in the form of two games against the Pittsburgh Thunderbirds, before battling the top teams in the Division for playoff seeding in August.

Pittsburgh presents a new opponent for Raleigh but there are some familiar faces competing with the team this year. CJ Colicchio, who competed with the Flyers off and on in 2015 and 2018, was initially intending to suit up for the Austin Sol when the COVID-19 pandemic hit. A year later, he has been one of the leading downfield threats for the Thunderbirds offense using his size and athleticism to great effect. With 15 goals to his name, Colicchio is neck in neck with the 2019 star of Pittsburgh’s offense, Max Sheppard. Sheppard has maintained a steady presence on the Thunderbird’s offense with 16 goals of his own and 14 assists. Pittsburgh has been running a traditional vertical offense with two handlers back and then a string of receivers downfield. Thomas Edmonds, Jimmy Towle, and Sam VanDusen have all stepped up as important contributors for the Thunderbirds, with Edmonds and Towle shining on Pittsburgh’s offense, and VanDusen helming the D line with his impressive lefty throws. Colicchio also isn’t the only former Flyers player suiting up with the Thunderbirds in 2021. Clint McSherry and Sam Gabrielson have also been playing with Pittsburgh and look to continue growing as they compete with a new Atlantic Division team.

Raleigh will have plenty of defensive answers to how Pittsburgh likes to play downfield. It’s not hard to disrupt a traditional vertical offense and Raleigh’s defense has been on a roll. In the last three games the D line has accounted for 38 goals averaging 12 a game. Against Pittsburgh’s offense Raleigh will have a chance to continue building it’s defensive consistency. Elijah Long, Seth Weaver, Alex Davis and Ethan Bloodworth have added so much more bit and playmaking ability alongside the longstanding veteran crew. It will curious to see who amongst Raleigh’s defenders takes the Max Sheppard matchup, while David Richardson remains the obvious choice to take on Colicchio. Trevor Lynch could also see some utility as a deep defender.

Meanwhile Pittsburgh will have to contend with Raleigh’s offense which has continued to develop better chemistry and produce impressive scorelines. Henry Fisher had an impressive five goal performance while Anders Juengst continued his impressive AUDL debut with 6 goals against Tampa last weekend. The flexibility of Raleigh’s offense has shown since the Flyer’s home opener against DC back June. Between Allan Laviolette, Anders Juengst, Henry Fisher, and Matthew McKnight, the Flyer’s O-Line can plug in any receiver anywhere on the field. Pittsburgh may struggle to match Raleigh’s depth and keep pace with the dynamic personnel that Raleigh offers in spades. It's difficult to imagine a situation where the 1-4 Thunderbirds are able to overcome Raleigh this season, but the local flavor of players competing this weekend and in the following Flyers-Thunderbirds game on July 30th offers a compelling reason to watch this new matchup. 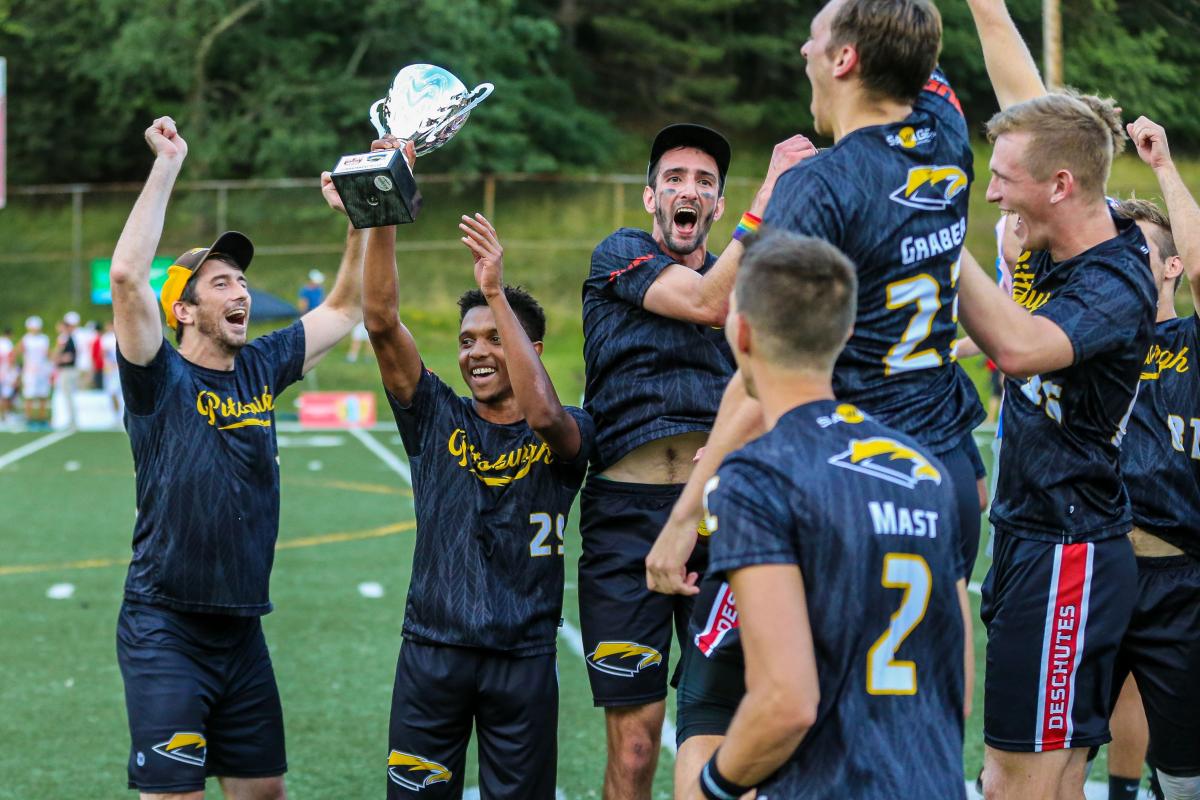 The Thunderbirds celebrate their home win against Philadelphia.

15: The number of goals CJ Colicchio has scored this season.

16: The number of goals Max Sheppard has scored this season.

22: The number of goals scored by Anders Juengst this season.

31: The season high number of goals scored by the Flyers last weekend.

493: The total yardage registered by Sol Yanuck against Tampa Bay.