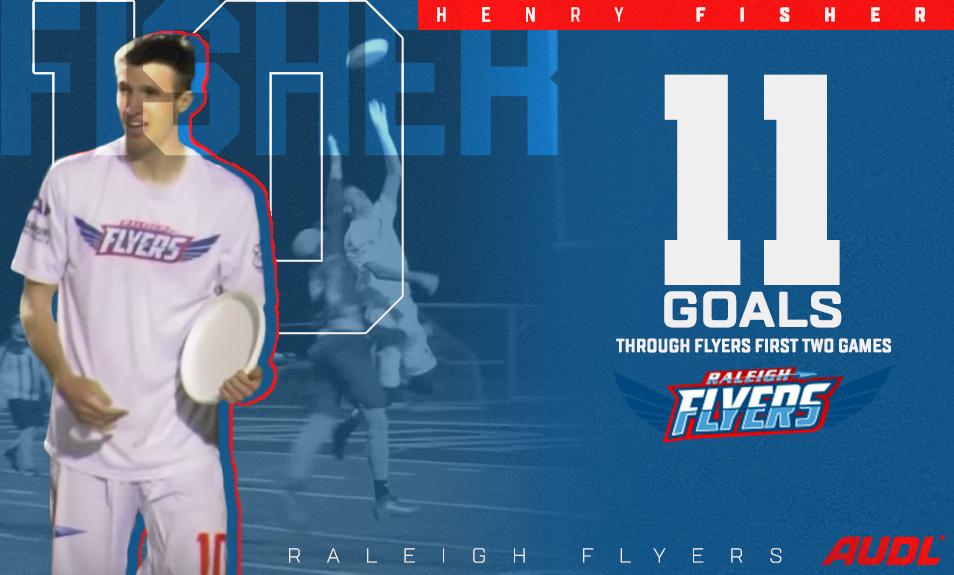 While the Flyers' trip to Texas on opening weekend didn’t go exactly as planned, they did come home with potentially a new star. Henry Fisher exploded onto the professional scene with 11 goals in his first two AUDL games. The 6-foot-6 Durham native has fit right into the Flyers scheme. He brings an extra dimension to the Flyers offense, and his height and length make him a weapon on the defensive side as well.

“He’s got really good energy,” said Coach Mike DeNardis, “He’s fast, he’s big, he’s got a motor that doesn’t quit, and that kind of energy really drives a team and he did a lot of that this weekend.”

Fisher was thrown right into the fire in his first weekend, with back-to-back games against a terrific Dallas squad and an opportunistic Austin team. A preseason schedule loaded with scrimmages against some of the top collegiate squads in the Triangle would help him get settled with the team, but how does the competition and level compare between college and professional?

“The timing aspect of it,” explained Fisher. In college, most games are “First to 15” style games. With the four quarter games without a score limit, players need to adjust how they play. Fisher admits he believed the Flyers would win the Dallas game when they were up 12-10 at halftime, as in college they would be right on the cusp of victory.

When asked how he felt about playing in his first professional games last weekend, Fisher admitted he was a bit nervous going into the Dallas game. “It was kind of nerve wracking to jump into what felt like a really big game immediately,” he said, “My impression was they’re very good and it was going to be a tight game. The thing that calmed me down before the game was realizing it's frisbee, I’ve done this before.”

Fisher didn’t show any signs of nerves in Texas, scoring essentially a quarter of the Flyers goals on the trip. He is the current leader in the league is goals scored, and even without the 4 goal performance versus Austin he would still be tied for first. He was quick to credit his teammates for finding him in the endzone, especially thrower Jacob Fairfax who assisted six of Fisher’s goals. Fisher also acknowledged that the bigger AUDL fields allowed him to use more of his tools.


"I attribute it to kind of more space for me to move… more room to get to top speed and make more of an impact on the game,” Fisher certainly has had an impact, and he hopes to continue that trend as the season goes on.

Fisher certainly brings a “youthful exuberance” to the team, according to Coach DeNardis. But the pressure isn’t off the young buck yet.

“I just want to continue to have him grow as a player. He has a lot of potential still,” explains DeNardis. “One of the goals for our offense is to make sure all of our big men are as competent throwers as they can be.” Fisher agreed, saying he doesn’t feel a lot of pressure as rookie and has a simple job: Get open and score goals.

The season is young. With ten more games on the schedule, Fisher has plenty of time to establish himself as one of the top young players in the game. The rest of the division should take warning; the Flyers have one Big Fish that isn’t going to go down without a fight.