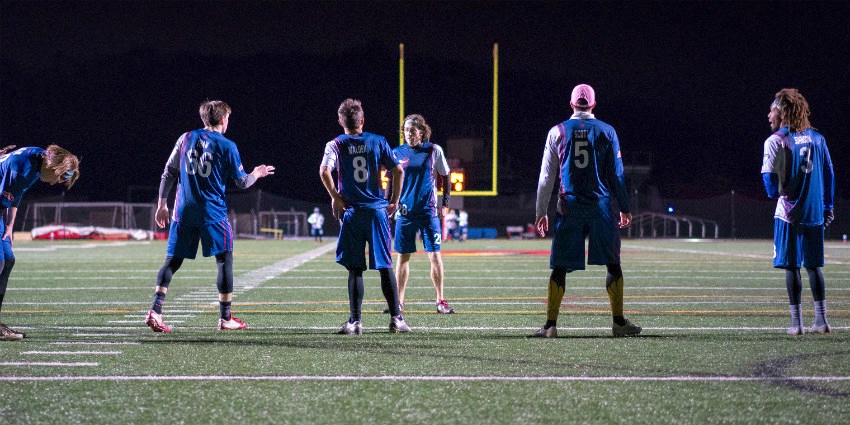 As noted in the game recap, the Breeze’s 14-game winning streak at home came to an end in their first game in Cardinal Stadium. Starting off the season in the loss column is not an ideal scenario. Even taking into account a partial roster turnover and abundance of youth on the team, the DC Breeze (0-1) still had a strong regiment of returners and most importantly they were at home.

Those 14 consecutive home wins spanned 12 regular season games and two postseason contests. There were six overtime periods and countless highlight reel materials. Outscoring opponents by 85 points in those games, there was never a time where Breeze fans went home dejected.

Since that loss on April 23, 2016, the team has gone 21-9 with two postseason appearances. But of all teams to snap the streak, the Montréal Royal (1-0) were not the team anticipated to do so. In the streak, the Breeze’s average margin of victory over the Royal in the nation’s capital was the largest of any opponent (+9.7).

The team with the odds to play spoiler was the New York Empire (+1.6) as they played the Breeze five times in those 14 games. Surprisingly enough, the Ottawa Outlaws (+5) only played in D.C. once.

Matthew ‘Rowan’ McDonnell tied for or led the Breeze in every single significant category. He had four goals, five assists, and four blocks. With a +12 plus/minus, the third-year player had the highest mark of any player on either side of the disc. No one on the Breeze played more points, nor did any complete more passes than did McDonnell.

Not to be outdone, Jeff Wodatch was right behind, tying McDonnell and Eric Miner with four goals, throwing two assists, and getting two blocks.

It was evident that unforced turnovers were a problem for the Breeze in the frigid conditions, especially in the early going. Of their 25 turnovers, the Royal only recorded nine blocks. Compared to the Breeze’s 17 blocks on 22 turnovers for Montréal, it cannot be understated that DC threw the game away.

Of the 17 blocks by the Breeze, four came from Delrico Johnson to tie McDonnell for the team-high. Already it is looking like these two will be having another blocks battle by season’s end, after going 1-2 for the team lead in blocks in 2017.

Sticking with the D-line, eight players played 12 points or more when D.C. was pulling, and only two of those players were rookies. Of all of the newcomers, Gabe Webster (19 points) and Alex Liu (15 points) played the most.

Breeze Top 5 Performers of The Game: