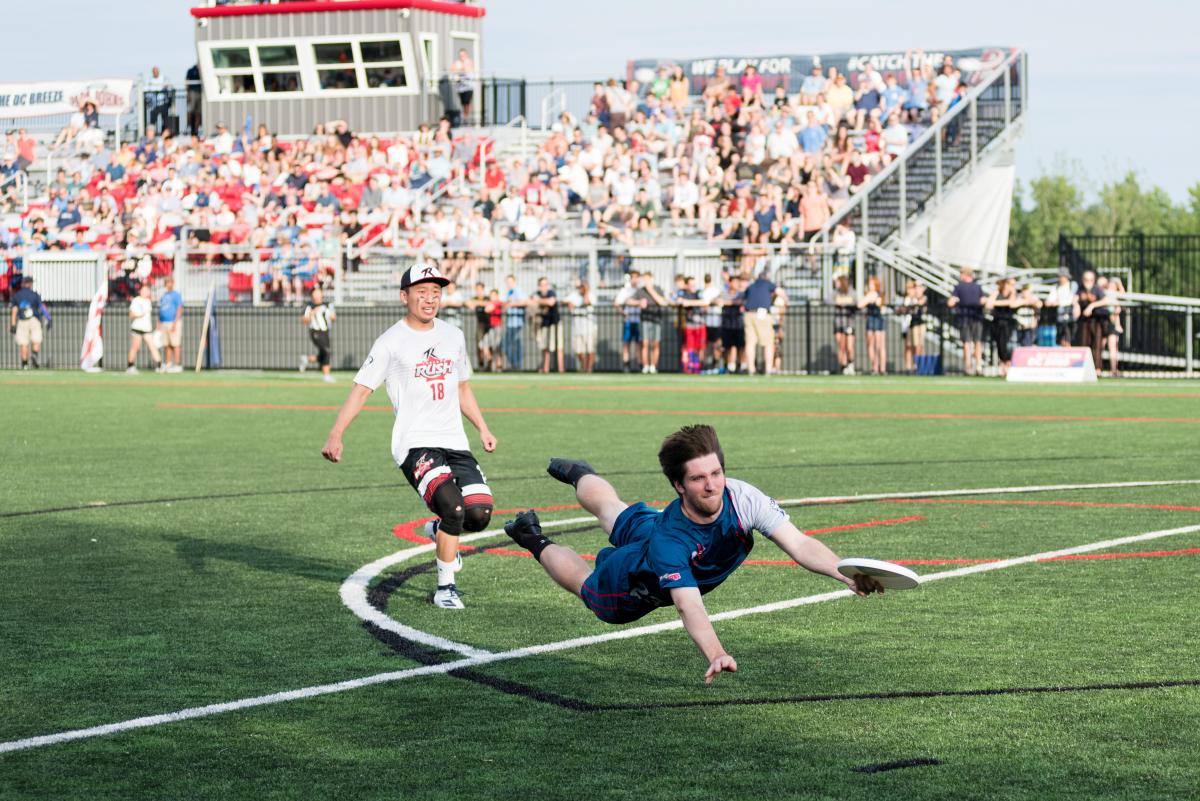 The DC Breeze improved their record to 6-4 and picked up two wins in one weekend for the first time with a pair of victories over the Toronto Rush and Philadelphia Phoenix on Saturday and Sunday.

The results lifted the Breeze into a virtual tie for second place in the AUDL East with Toronto (5-3), although the Rush have played two fewer games. The teams will meet again in the Breeze’s regular season finale on July 6 in Toronto.

The win over Philadelphia left the Phoenix well behind in fourth place with a 2-5 record, bringing the Breeze closer to clinching a playoff berth for the fourth consecutive season. DC can secure a postseason spot with a win in their last regular season home game this weekend when Philadelphia visits the District June 22 at 4pm.

The Breeze and Toronto played a tightly contested game at Carlini Field, with no team ever leading by more than two points. With a national audience watching the game on Stadium, DC handed the Rush their third loss in as many games on U.S. soil this season.

District of Columbia mayor Muriel Bowser made an appearance as the Breeze improved their home record to 4-1 since moving into Catholic University’s Carlini Field this season. Max Cassell had a dominant offensive game with nine goals and a perfect catching percentage, while Rowan McDonnell contributed three goals and six assists, three of those to Cassell.

“We were running a lot of vert stack sets, and that lets me get downfield more because Cody Johnston and Nate Prior can kind of control the backfield and generally run a two-handler set,” Cassell said. “I think that’s why I scored so many goals. Usually I’m kind of backfield, I have the disc a lot more.”

The game’s biggest turning point came late in the third quarter when the Breeze broke Toronto’s offensive line to take a 19-18 lead. After a Breeze hold tied the game at 18, Toronto worked its way downfield until a throwaway gave DC the disc on its own goal line. With a series of six quick throws, the Breeze dashed down the force side to complete the break, with Jeff Wodatch finding Johnston in the end zone.

The point gave DC its first lead since the game was 16-15, and while the Rush were able to draw even three separate times in the fourth quarter, the Breeze would never trail again.

“That was huge for our team,” DC player-coach Pete Mancini said. “This felt really good. And like I told the team before the game, as long as we execute what we planned properly, we win the game. We executed it properly, we won the game.”

Mancini stepped into a daunting new role this week, assuming the position of head coach in the absence of Darryl Stanley.

“This is the most stressful thing I’ve ever done in my frisbee career,” Mancini said. “You’re not just playing for yourself, you’re running the team. So everyone’s in my ear saying what I should be doing because they know it’s my first time, I’m like, ‘I got it, I got it.’ I didn’t have it, it was very stressful. But honestly, that win was a team effort. I called the lines, but it was a huge team effort.”

After the nailbiter win at home on Saturday night, the Breeze traveled to Pennsylvania on Sunday for a matchup with the Phoenix. Both teams were playing for the second day in a row, as Philadelphia had fallen 19-14 at the New York Empire on Saturday.

As they had the night before, the Breeze took control of the game with a third quarter run that established a permanent lead. DC trailed 11-9 as the second half began, but came out firing to start the third quarter with a 4-0 run that the Phoenix never recovered from.

McDonnell starred again with five goals and four assists, raising his season totals to 47 and 45, respectively. The Breeze have now played six straight games against the Phoenix without a loss, dating back to June 2017. The two teams played to a rare tie last year in Philadelphia, 18-18, when the officials called off the overtime due to a major lightning storm.

With five games left on its schedule, Philadelphia still has an outside chance at playoff qualification, but it will need to win at least four of its remaining games, beginning next week in DC. After that, two road trips to Canada and a home game against undefeated New York will still await the Phoenix, so their postseason chances appear to be slim.

The Breeze can guarantee themselves second place in the East with wins in their final two games, including on the road at Toronto on July 6. The second place spot and the playoff home game that comes with it could very well be on the line in that final regular season meeting.

The Breeze must first take care of business against Philadelphia on June 22, with the chance to clinch at least a third place playoff spot in front of home fans at Carlini Field. First pull on Saturday is scheduled for 4 p.m.