Breeze Off to 2-2 Start, Head To Canada | AUDL
Skip to main content 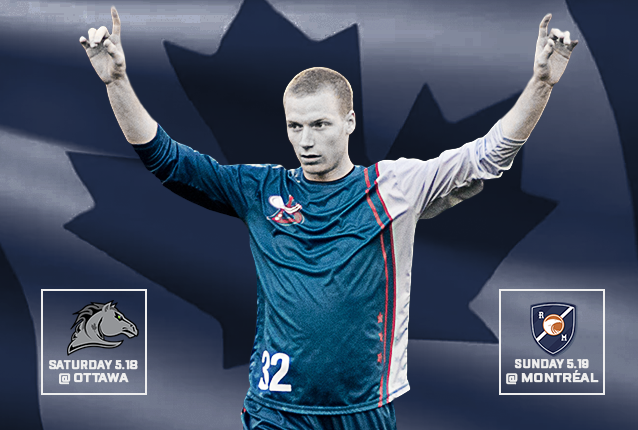 After a 2-2 start to the season within U.S. borders, the D.C. Breeze venture north this weekend to visit the Ottawa Outlaws and Montréal Royal to complete the first half of the regular season schedule.

The story so far

The Breeze began the season April 13 with a close 21-18 loss at the New York Empire. Going up against one the AUDL’s preseason championship favorite, DC entered the fourth quarter tied at 14 before coming up short thanks to a late New York run.

Rowan McDonnell led the Breeze with five goals despite arriving late to the game. He also threw four assists, tying him for the team high with Xavier Maxstadt. Jeff Babbitt led the Empire with five goals of his own.

A week later, the Breeze opened up their home schedule at Catholic University’s new Carlini Field with a 20-18 win over the Philadelphia Phoenix. Anthony McLean led the way with six goals as the Breeze never trailed after the second quarter. It was DC’s seventh straight home victory over its closest geographic rival.

The Breeze remained perfect at Carlini Field May 4 with a 24-15 win over Ottawa. A 6-1 D.C. run that bridged the first and second quarters gave the Breeze a 10-4 lead and kept the Outlaws at arm’s length for the rest of the game. Reigning league MVP McDonnell was in fine form again with four goals, six assists and a +10 plus-minus.

The Breeze returned to New York last week for another shot at the Empire, again coming up just short in what was New York’s toughest test of the season thus far. The Empire were just a completion away from running out the clock with a 23-22 lead in the fourth quarter when a block by Leo Pierson set up a buzzer-beating Breeze goal to force overtime.

The game would continue into sudden death double overtime tied at 25 with the Empire getting the disc first. They worked the disc downfield but turned it over at the Breeze goal line, only to get it right back when the referees incorrectly ruled that the Breeze had no timeouts after McDonnell had called one. New York scored moments later to win the game, 26-25.

The Breeze are currently holding onto the third and final playoff spot in the East Division, but can start to pull away from the bottom three teams with two victories in Canada. Ottawa and Montréal are both winless on the year, so a pair of Breeze wins would lift D.C. to 4-2 and leave the Outlaws and Royal even further behind.

The first leg of the road trip is Saturday night at 7 p.m. EDT in Ottawa. The Breeze and Outlaws will renew their Battle of the Capitals rivalry as D.C. searches for its sixth straight win in the matchup and its second already this season.

The Outlaws (0-4) are led offensively by Alec Arsenault, who tops the team with 13 goals despite only playing in three out of four games. Their top handler has been Nick Boucher, who leads the team in assists (15) and completions (150).

The Breeze will continue on to Montréal for Sunday’s matchup with the Royal, set for 1 p.m. EDT. Montréal has had a relatively quiet start to the season with only two games over the first six weeks, and Sunday’s game will be their home opener.

While the Royal are 0-2, their losses both came on the road against the East’s two undefeated teams, New York and the Toronto Rush. The Breeze will be looking for their first victory over Montréal since 2017 after dropping both games of the season series a year ago.

Quentin Bonnaud has 12 goals on the year to lead the Royal, while Kevin Quinlan and Quentin Roger have each paved the way with five assists.

Both Breeze games this weekend can be watched live on AUDL.tv. The Breeze will return to Carlini Field May 26 for the second matchup of the year against Montréal.