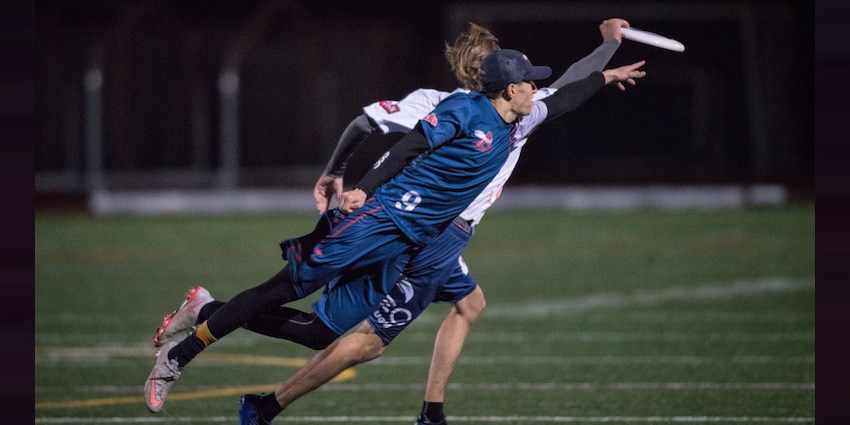 A lot can happen in a 14-home game winning streak. A stretch that has lasted two seasons has included countless comebacks, nail-bitting overtime thrillers, and the occasional blowout. That 714 day streak without a home loss came to a disappointing end for the DC Breeze (0-1) in frigid conditions Saturday night at Catholic University. Digging themselves into an early hole, the late fourth quarter comeback was not enough as they fell 24-22 to the Montréal Royal (1-0) in their 2018 home opener.

The game time temperature was technically 40 degrees but felt more like 25 thanks to a brisk breeze, cloudy sky and even light snow flurries spotted in the air. It’s like Mother Nature forgot who the home team was, as these were April conditions for Québec, not for Washington, DC.

Leading only after the first point of the game with former Mary Washington teammates Zach Norrbom finding Kyle Khalifa for the first goal of the season, the Breeze’s O-line struggled to find an early rhythm with a new contingent of players moving their way into the starting card. With unforced turnovers and lacking communication, the offense fell into an early hole getting broken five times in the opening quarter.

Despite the five breaks, Montréal did not get their first block of the game until the 10th point of the contest. By then they were already up 7-2 in the waning moments of the first quarter.

“We came out pretty rough,” head coach Darryl Stanley said. “I think really when you look at some of those errors, those are guys that really don’t make those errors come later in the season. I think we are feeling okay about that. We have to get some more reps, clearly, together. We were learning how to fight, learning how to win.”

A downfield zone focusing on the low-side cutters stymied the young players on the Breeze. It was a zone that the squad really did not figure out until well into the second half.

In the final frame, the Breeze were really able to put together a refined comeback. Trailing 22-17, DC scored four of the next five points, three of them breaks, to climb within two at the midway point of the quarter.

Down 23-21, the Breeze had the opportunity to cut the deficit to one and establish a break train. Wasting no time on that point, the Royal sent it deep. A laser downfield look by Malik Auger-Semmar (three assists, two blocks) got sent away in the end zone by Delrico Johnson (two goals, three blocks).

“I really just wanted that first ‘D’, once that happened, more would come,” Johnson said. “Once we focused and locked down, you could see how dangerous we are.”

Working it up the field, two careless turnovers and an overzealous huck ended the point for DC. Although Jeff Wodatch (four goals, three assists) was able to get a second end zone block, Auger-Semmar dropped a beauty of a scoober into the arms of rookie Cam Burden (three goals), to take a 24-21 advantage.

It was a point that lasted over two minutes, used a Montréal timeout, and ended up being the final nail in the coffin for the Breeze in their first game at Cardinal Stadium. That is despite the team outscoring the Royal 5-2 in the final quarter.

“Honestly I thought to myself that timeout, when [Montréal’s] O-line was that tired, we should have been able to score against a weak and tired O-line at that point,” Stanley said. “If we keep wearing them down like this, I think we’ll be able to succeed because they probably won’t be covering us.”

It was not only the O-line that had difficulty. In key moments of the game the offense of the D-line was unable to punch it in. Defensive offense had possessions that were relatively short and missed two opportunities to end quarters with a break.

In total, the Breeze had five breaks compared to the Royal’s eight.

Mike Voelpel had a game-high six goals for the Royal, four of which came in the first half.  Holding defending All-AUDL honoree Quentin Bonnaud to only three goals and two assists kept him to one of his lowest outputs in his Royal career.

It was Matthew ‘Rowan’ McDonnell who steadily carried the torch for the Breeze, leading in every major scoring category. Securing four goals with five assists and four blocks, McDonnell was a huge reason the Breeze’s offense was able to get some early holds.

“We never thought the game was out of reach. Rico flying around getting blocks for us, Troy Holland, the whole D-line, Gabe Webster, they were giving us chances all game.” McDonnell said. “With our D-line, we’re never out of a game. I just wish our O-line held a couple more times in the first quarter and then we would have been okay.”

Joining the offensive unit as well, Eric Miner had four goals in the home opener. Brad Scott had two goals and an assist in his return from long term injury.

“It wasn’t that Montréal was outplaying us, it was that we had miscues, we had throwaways, we just had first game jitters, and we had some chemistry issues. The fact that it only plagued us in the first quarter I think is really tremendous,” said Scott.

In addition to their first home loss since April 23, 2016, it also marked Stanley’s first home loss as a coach in the professional ranks (Philadelphia Spinners included).

The Breeze have a weekend off before preparing for their next home game against the Ottawa Outlaws (0-0) on April 22. The team will be looking to start a new streak in the friendly new confines of Cardinal Stadium.