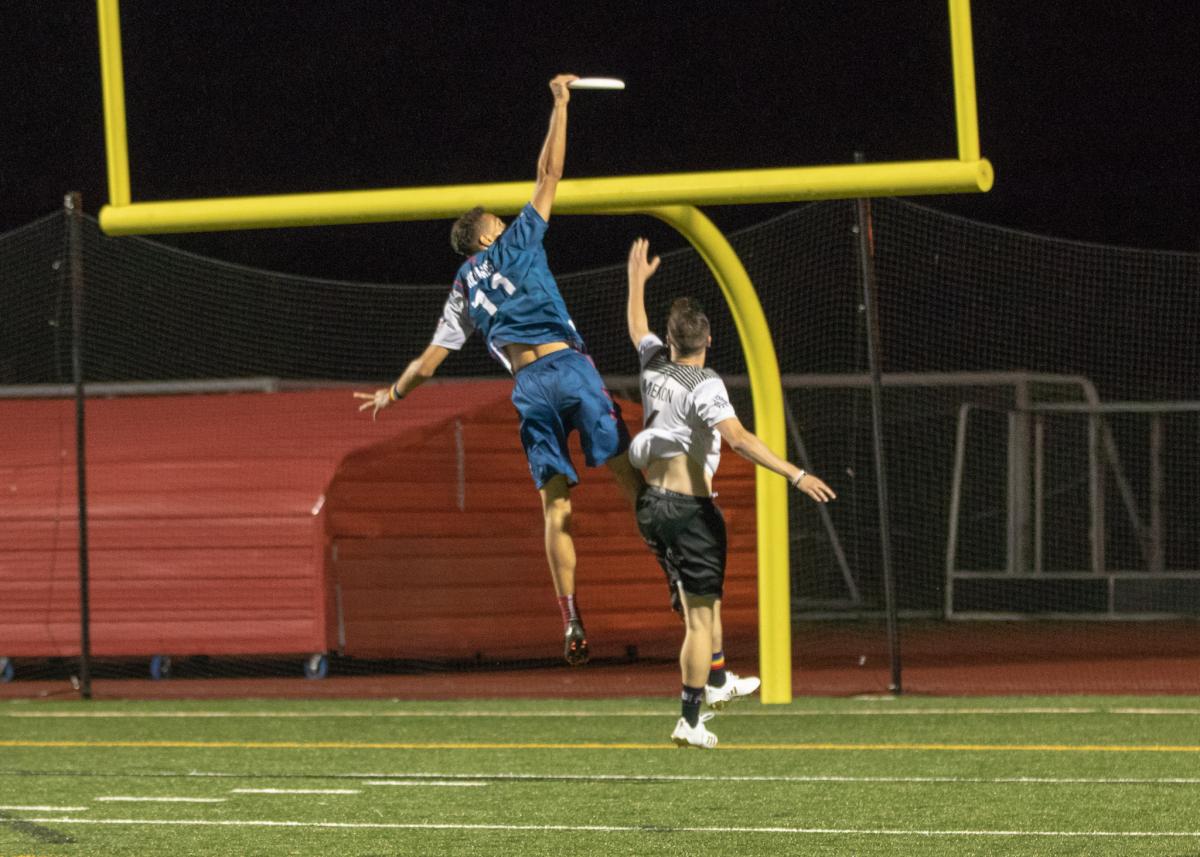 The DC Breeze had trailed most of night. No matter the intensity by the D-line or the strategy by the coaching staff, the Toronto Rush stayed one step ahead. DC kept clawing on their home turf looking to get an advantage on the Rush, but all was to no avail.

On the final point at Cardinal Stadium, that battle that head coach Darryl Stanley and his squad had fought all night gave them their triumphant breakthrough.

Toronto had the disc with 38 seconds remaining in overtime with a chance to send the contest to the sudden death 2nd OT. DC, fielding their D-line that had grinded it out all evening, had just taken only their fourth slim lead of the game and was hoping the one goal margin would hold. The defense went man, but was giving up all the under cuts and all the handler resets. Still it took the Rush 20 seconds to get past the 50-yard line, their offense stymied.

Then it all came together for the Rush offense. A breakside throw to gain 15 yards - 12 seconds left - A dump to get away from a double team and to open up the majority of the field - Eight seconds – A swing to the open side putting the Rush 15 yards out – Four seconds – An open side backhand throw to the endzone….

Elevating after a 30-plus yard sprint to catch up to his man, Swift flew through the air to knock away the potential game-tying score in the corner of the end zone before landing out of bounds and sliding to a stop on the wet turf.

Zero seconds showed on the clock, along with a score of DC 25, Toronto 24.

“I was tired,” Swift said. “I could go all out on that play; there wasn’t really time for him to double back and get that inside... so basically I went all out on that. I definitely knew [I was going to get the disc].”

It was a similar scenario at the end of regulation with the opposite result. Enjoying a rare lead, the Breeze (5-4-1) were trying to close out a comeback win. After a mid-point timeout, some fancy footwork on the goal line by Nathan Hirst got Toronto the goal with three seconds left to send the game to the extra period.

“I feel bad for Ryan because we keep putting him in situations where he’s guarding the toughest matchup,” explained Stanley. “He gets no glory because he’s playing the best player all the time. For him being able to end the game with a block is very satisfying for him I’m sure.”

On that pivotal point, Swift was covering the top goal scorer for the Rush (8-1), Jay Boychuk. His four goals trailed only the Breeze’s Jeff Wodatch (six goals). All night Boychuk was running rampant for an under-manned Toronto squad. One of their star players that was able to make the trip to DC, Isaiah Masek-Kelly (four goals, one assist, three blocks), was the one that made the desperation throw at the buzzer.

If there is one franchise that you should not fall behind to in the AUDL, that would be Toronto.

The Rush entered the game at 8-0, the only undefeated team in the AUDL. They won the toss and elected to pull to start the game, and things immediately started to fall into place for another victory. They opened the contest with back-to-back breaks. They had a 13-9 lead at halftime and looked on track to keep their unblemished record intact.

“That [halftime] was a huge moment because obviously in our last game against them, that kind of happened and we just threw it away the rest of the game” Wodatch said. “But we didn’t really come together audibly, we just kind of knew that we had it and we were all good, able to trust each other.”

After being broken four times in the first half, the Breeze O-line failed to punch it in only twice during the entire second half and overtime.

Without defensive stalwarts Delrico Johnson and Brad Scott on the active roster, the D-line eventually got the job done for the Breeze. They finished with eight breaks of Toronto’s O-line and did so with a group of college players getting the most playing time they had all season.

Matthew ‘Rowan’ McDonnell continued to strengthen his case for AUDL MVP award consideration. Still recovering from a minor hamstring injury, McDonnell’s role was adjusted from his usual, high-flying hybrid/cutter position to more of a playmaker, and the change was reflected in the numbers. Averaging 4.7 goals and 3.7 assists per game played this season, he finished the night with only two goals but dished out eight assists. Along with only two turnovers, he had a game-high +8 in the contest. Switching between O-line and D-line, he played 32 of the game’s 49 points.

“Today was ‘Hey what can I do with this group of players,’” Stanley said. “This is the one that really counts; doubleheader up in Canada. I’m just going to say ‘believe, go out there and bring that energy right from the start.”