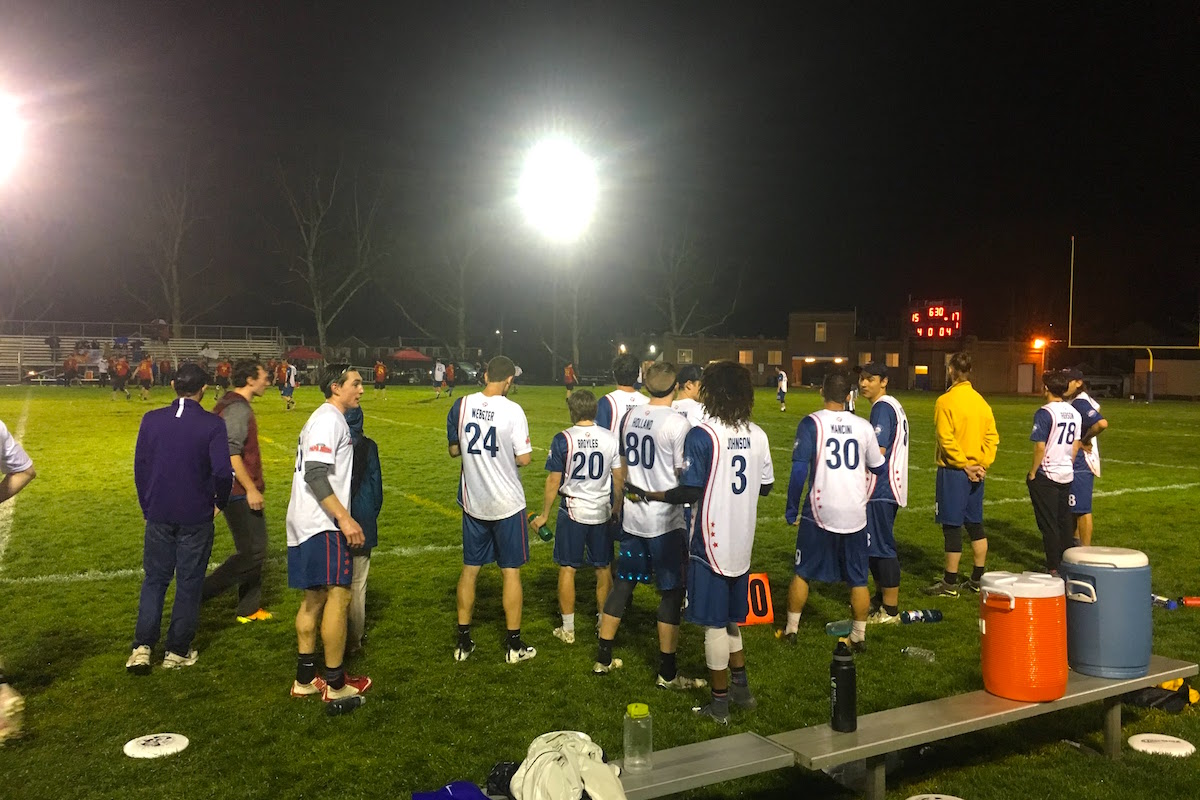 A rain-soaked, lightning delayed affair prevented the DC Breeze from getting their second victory in their first road game of the year. The same weather prevented the Philadelphia Phoenix from holding down the fort at home as well.

That’s right, the Breeze and Phoenix ended their Saturday night contest in an 18-18 tie.

As only the second tie in AUDL history, this marked the first time either team has recorded a mark in the third category of the standings on their record. The only other tie was the Minnesota Wind Chill vs. the Chicago Wildfire back in 2015.

From the start of the scheduled 6:30 first pull, it was a race against the clock.  The first of many lightning delays pushed the start back by 20 minutes. No less than four times did play get impeded by weather at A.A. Garthwaite Stadium. Due to venue regulations, the contest had to end at 9:50, which just ended up being enough for the game to end in regulation. As a result, with no overtime or sudden death point, the matchup officially went down as a draw.

Crash! Boom! That one was close by. Another lightning delay here in Conshohocken. 3-4 @PHLPhoenix lead. See you in 20... or so. pic.twitter.com/w5yW2yril0

There were multiple opportunities for the Breeze (1-1-1) to put this one away in full time. They entered the final quarter with a 17-15 lead but only scored once in the final 12 minutes.

To the credit of the weather, Philadelphia (1-1-1) could not score much, either. A slippery disc combined with some impatience from both teams’ offense led to long points, which in all honestly is what allowed the game to reach regulation before the 9:50PM deadline.

The Breeze found themselves up 18-16 with just over two and a half minutes left in the game. Delrico Johnson had just found Gabe Webster for his fourth assist of the contest. With one of the cleanest O-line points of the night, it only took seven throws to get the disc into the end zone.

A hold by the Philadelphia offense got them within one, and then the Breeze threw the disc away for the 20th time. The Phoenix then wasted no time punching that one in to tie the game up at 18. DC was unable to get the game-winning goal with the 43 seconds left on the clock. Philadelphia actually ended up with the last shot for the win after a huge block my Matt Esser, but the final throw of the night found the grass to preserve the tie.

Jeff Wodatch and Kyle Khalifa each had three goals for the Breeze. Max Cassell returned after missing last week with a hamstring injury earning a goal, an assist and 22 completions in 17 points played. DC was without Matthew ‘Rowan’ McDonnell, Nathan Prior, Brad Scott, and Zach Norrbom for this first road trip on the season.

With the result the Phoenix continued their strong start to 2018. After falling to the Toronto Rush by a mere point at home in their season opener, they got a five-point win over the Montreal Royal and have now held serve — just barely — against the Breeze.

Is another team emerging in the East Division race for a postseason berth? In what looked like a four-horse race at the start of the season, Philadelphia has proven that they are going to be a force to be reckoned with this year.