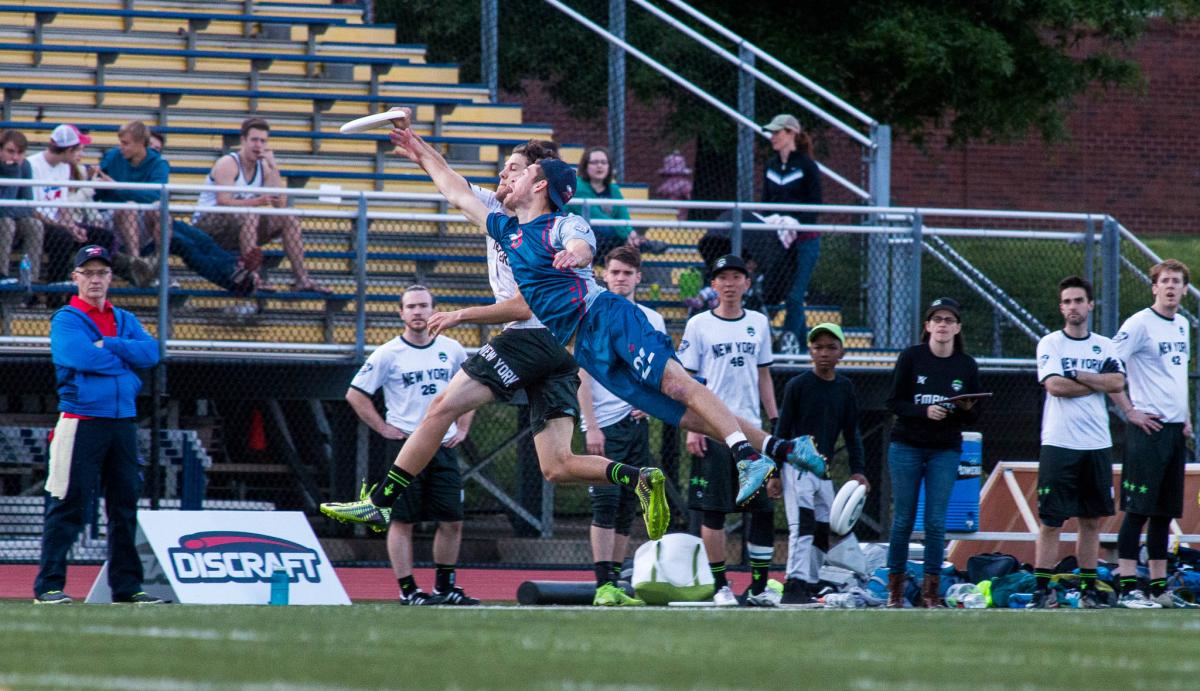 The DC Breeze (1-2-1) fell to the New York Empire (2-1) Saturday night 19-18, snapping the seven-game win streak the Breeze had against the Empire.

New York won the game on a Ben Jagt to Jeff Babbitt connection in the end zone over two Breeze players at the buzzer to win the AUDL East matchup. Babbitt only had one goal in the game, but that goal proved to be the difference for New York as time expired.

Early in the game, the Breeze moved the disc well with smooth passing. This allowed DC to hang with New York in the first quarter as the score remained tied after the first period of play. The teams were closely matched, but the Empire were able to maintain a lead throughout the second quarter. A Max Cassell hammer to Delrico Johsnon in the end zone with no time left in the half brought the Breeze within one at the break, 10-9.

Oh my! After a Breeze timeout with 3 ticks in the clock, Maxstadt hockey assists to Max Cassell who quickly turns and hammers to Rico over outstretched Empire arms for the goal as time expires! 9-10 NY leads. Halftime in New Rochelle, NY as the youth drummers rock out the crowd pic.twitter.com/O9Py8o9noC

The Breeze trailed by as many as four goals in the third quarter, but they clawed their way back during the latter part of the game. Matthew “Rowan” McDonnell scored to bring the Breeze within three to end the third quarter. He then scored again in the fourth quarter to cut the New York lead to two. The Breeze made it a one point game on a break as Troy Holland found Johnson in the end zone for the score.

DC and New York traded points back and forth until Holland came up with the block with a minute to go. The Breeze went down the field as McDonnell found Ryan Swift in the end zone to tie the game with 22 seconds left. The Empire would then work the disc down the field to win at the buzzer.

And the Empire score on the Hail Mary as time expires. What a finish! Great game @empireultimate, tremendous effort @theDCBreeze. 18-19 Empire win this one.

Leading the scoring department was McDonnell with five goals and three assists. McDonnell has 15 goals and 13 assists on the season, leading the team in both categories despite missing last week’s game in Philadelphia. He is averaging 5.0 goals and 4.3 assists per game played this season. Johnson also had five goals and one assist for DC.

Jibran Mieser and Jagt led the Empire with five goals apiece, matching the total by McDonnell and Johnson. Jagt also had a team-high five assists for New York.

The two teams played the game evenly as each had a 94% completion rate and 22 turnovers. New York led by two in blocks, 14-12. Lloyd Blake led the Breeze in blocks with two. The Drost brothers led the Empire defense with three blocks each.

The Breeze fell to fifth place in the eastern division with the loss. The Empire move to second place in the division, trailing only the Toronto Rush.