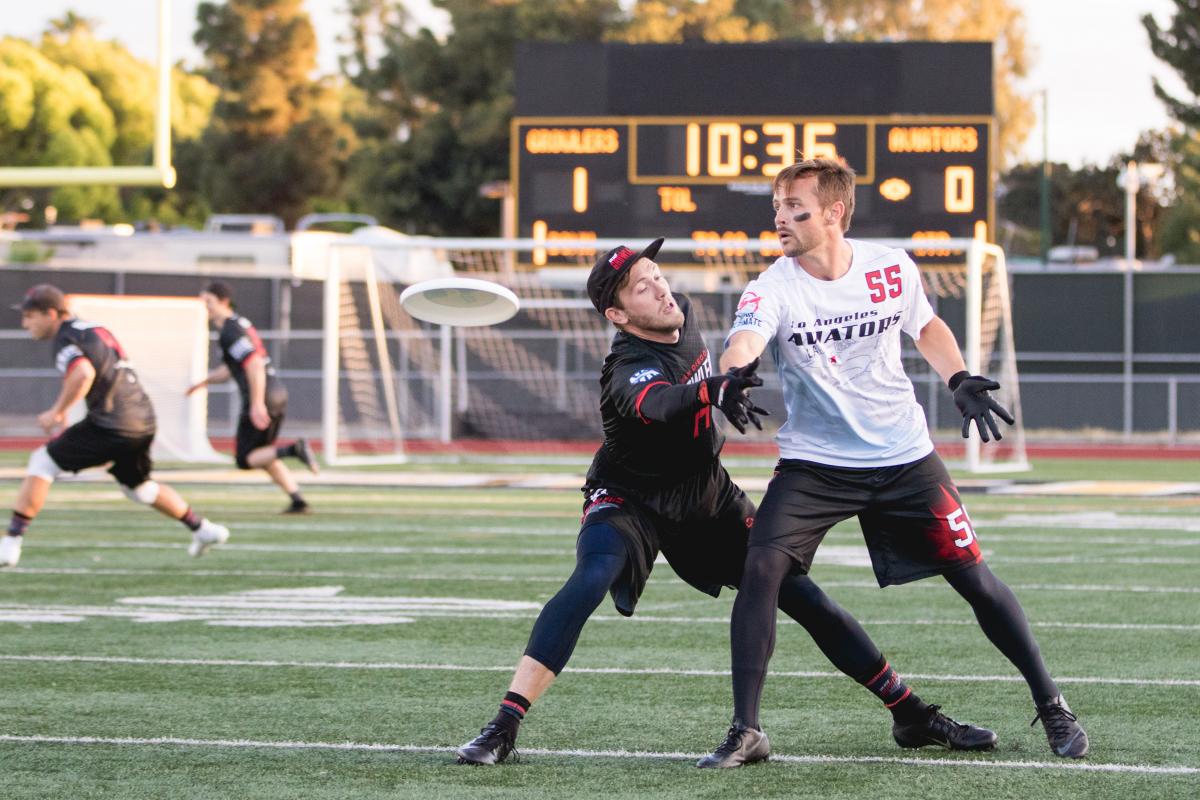 SAN DIEGO -- One of the greatest commercials about sports is Gatorade’s “Sport is Sport”, featuring a montage of what sports look like all over the world. The compelling visuals are accompanied by this unforgettable quote: “A win’s a win, a loss is a loss, but no matter what, you better come with it, because it’s ninety feet to first, no matter where home is.”

In Saturday night’s season opener for the Los Angeles Aviators and San Diego Growlers, San Diego notched the win, Los Angeles took the loss, but for all 48 minutes of gameplay and every one of the 120 yards on the field, both teams came with it. The Growlers’ 20-18 victory showcased some of the highest levels of intensity and drama, amid developing chemistry and dusting off rust.

Both teams feature rosters with new looks. Most notably for San Diego, they added Jonathan “Goose” Helton, one of the preeminent names in the sport. He is one of six players in the history of the AUDL to play in all eight seasons of the league’s existence, and the only player in league history to play in all four divisions. Not to mention he won the first two MVP awards in league history in 2012 and 2013 playing for the Indianapolis Alleycats and Chicago Wildfire, respectively.

Los Angeles had multiple new faces make their team and league debuts in the opener. Kyle Conniff (#13, UC-Irvine), Colin Gall (#27, UC-Santa Barbara), and Ryan Smith (#20, CSU-Long Beach) are all local guys seeing their first AUDL playing time. The never-ending motor of Garrett Santi (#66, Central Connecticut State University) is making his return to the league seven years after debuting for the now-defunct Connecticut Constitution in the league’s inaugural season. And Joc Jimenez (#36) hails from Colombia and could very well be the most explosive athlete on the field at any given moment.

As for the game itself, from the opening pull to the last seconds running off the clock, the two teams were never separated by more than two goals. Los Angeles earned the first break point of the game early in the first quarter, but San Diego earned it and more back on the way to a 6-4 lead with under a minute remaining in the quarter. The Aviators offense worked casually up the field until Tim Beatty (#24) found Michael Kiyoi (#1) for a goal with ten seconds on the clock. On the ensuing possession, the Growlers got a couple throws off easily to find Helton on the left side of the field at midfield. He lofted a backhand that made its way into the endzone floating towards the right side. Trevor “Quod” Purdy of San Diego, a 6’6” monolith and veteran receiver, placed himself in perfect position to catch the disc as the quarter came to a close, giving San Diego a 7-5 advantage.

The Aviators scored quickly to start the second when player/coach Tyler Bacon (#55) used a half-blade-to-space forehand found Kiyoi again. After a Helton turnover and a Ryan Lepore (#4) scoober through a double-team, Zac Schakner (#22) found Ryan Smith in the end zone for his first career goal and an LA break to even the game at 7. LA forced multiple turnovers on the next point before Gall also scored his first career goal on a cheeky vertical blade from Bacon right outside the end zone, giving the Aviators an 8-7 lead. The teams traded goals, including a four-and-a-half-minute marathon point that featured drops in the end zone by both teams, until San Diego earned another break to take a 10-9 lead with 12 seconds left in the half. The Aviators' end-of-quarter offense did not operate as efficiently as the Growlers', and they were left with a desperation hammer that fell short as the score held at halftime.

The third quarter began with both teams trading points back and forth, including a break each, to bring the score to 14-12. A Zach Theodore (#16) throw on an offensive point took off above Sean McDougall (#10). Growler Steven Millardovich made a play on the disc but flew into McDougall in the process. There was no foul call by the referees, but Millardovich invoked the integrity rule and called the foul on himself. McDougall found Eric Lissner quickly after for the goal. Sean Ham scored his fifth goal of the game to push the lead back to 15-13, and the Aviators were able to overcome a Theodore drop in the end zone when San Diego had a drop of their own near their own goal line and LA was able to capitalize to bring the score to 15-14. The teams then traded points to end the quarter 16-15, San Diego.

After the Aviators converted their offensive point to again tie the game, they earned a defensive block near their own end zone and were prepared to work for another break point. Unfortunately, a rookie mistake cost them that possession. On multiple occasions earlier in the game, Aviators players were warned for verbalizing a stall count. In the AUDL, only referees may initiate and call stall counts out loud. A violation of this is a 20-yard penalty. Dominic Leggio had possession of the disk, and Smith of the Aviators was the unfortunate violator. The Growlers were able to regain possession on the goalline and convert the score to retake the lead, 17-16.

LA responded quickly to tie the game with ten minutes left when Beatty found McDougall. San Diego’s next possession and ensuing goal was one of the highlights of the game, and the entire AUDL weekend, as Helton fired a 45-yard scoober down the line to Wes Groth to go up 18-17 around the 9-minute mark.

THE point of the game came next. The Aviators started with possession and were forced into a stall. A cross field throw fell out of the hands of a diving Growler. Bacon sent a huck to McDougall, but it trailed out of bounds. On the first backfield throw off the turnover, McDougall had a monster shoulder-high layout block. With possession again, Lissner looked for Mitchell Steiner (#12) in the back of the endzone, but the disc carried too far. Back in San Diego possession, Josh Kohl attempted a throw to the sideline from the middle of the field. That flat angle opened up a lane for Lissner to charge through and make his own horizontal bid and defensive block, an even bigger effort considering by then that line had been on the field for over three minutes. Steiner attempted a deep shot to Bacon, but it carried just out of reach and San Diego finally, mercifully called a timeout for both sides to bring in new, fresh lines with just over five minutes left in the game. Within three throws, the Growlers offense struggled to create flow and they were forced into another quick timeout. Whether there was a specific play call out of that huddle or not is unsure, but San Diego was settled and measured, with Travis Dunn eventually getting the disc in midfield and putting a huck out in front of Ham. He made a spectacular bid to secure the disc, the score, and a two-goal lead with 4:44 remaining that would prove to be the clinching score.

The teams traded scores over the next three and a half minutes, but when Los Angeles turned the disc over still down by two with under a minute remaining, San Diego was able to play keep away long enough to secure the 20-18 victory.

Sean Ham led all scorers with 7 goals. Sean McDougall and Michael Kiyoi each had 4 scores to lead LA, while Tyler Bacon paced the Aviators with 4 assists.

Adding a number to the loss column is always disappointing, but there are plenty of reasons for Los Angeles to be encouraged moving forward. Jeff Silverman (#19) entered the game feeling under the weather, and still contributed some stellar defense, coming one misstep and and a handful of inches away from multiple blocks that he would otherwise likely get in the future. Finishing minus-1 on end-of-quarter situations as a result of one defensive communication breakdown and two offensive stutters are easily resolvable situations. Multiple end zone drops and turfs, rookie mistakes and building team chemistry are all things that will improve as the season progresses. The defensive intensity that existed from the first pull onward is the biggest positive and something the team will continue to feed off of all season.

The Aviators next game is their home opener this Friday against the San Jose Spiders at Culver City High School. First pull is scheduled for 7:30 pm with coverage available on AUDL.TV. Subscribe there for access to live streaming footage, and follow along with the Aviators all season on Instagram, Twitter, Facebook and at theaudl.com/Aviators and LAAviators.com.