Culver City- One of the most compelling reasons we watch sports is to experience beauty in a variety of forms. In Saturday night’s 25-19 victory over the Seattle Cascades (0-4), the Los Angeles Aviators (3-1) displayed the full gamut of beauty.

We visually appreciate sports on a wide spectrum. Grandiose achievements like a home run swing from Ken Griffey Jr, or a one-handed catch by Odell Beckham Jr, are major spectacles that amaze and confound. Minor actions that potentially bore and disinterest the masses can still be mesmerizing. For instance, when all five Phoenix Suns change direction at the same time, or when a Tiger Woods chip travels a long, winding path to the hole, only to pause in place for a couple seconds before dropping in. With a roster teeming with confidence and energy, the story of the Aviators’ victory can be told in the summation of merely a handful of plays.

As time wound down in the first half, Sean McDougall fired a backhand from the left hash of his own 41-yard line. With Shane Worthington and Jesse Bolton of the Cascades hot on his heels, Joc Jimenez raced to the end zone, tracking the disc the entire way. Jimenez not only left the ground first and landed after both defenders, but reached the disc eight inches above their grasp, and carried four yards through the air from takeoff to landing. The entire process (2:01) was equal parts graceful and harrowing, especially considering the Aviators’ notoriety as a terrible end-of-quarter team. With Seattle’s failure to connect on their own hail mary attempt, Joc’s play gave Los Angeles considerable momentum entering the half with a 12-8 advantage.

The third quarter was evenly matched the entire way, as both teams scored seven goals in the period, and each team earned a solitary break. But Jimenez dazzled again to add some entertainment value along the way. After Will Coffin scored for Seattle to bring them within 16-12 at the 5:48 mark, the Aviators received the disc. Player/Coach Tyler Bacon received the pull in the middle of the field at his own 23-yard line, and at stall four launched a backhand huck downfield. Jimenez and Cascade Khalif El-Salaam sprinted step-for-step for 25 yards. With the disc within receiving range, Jimenez again was the first off the ground. This time he propelled himself more forward than vertical, reaching above El-Salaam’s head to secure the disc (3:05) and then touch down five yards from where he had jumped. Both plays were as much a result of pure athleticism as they were years of training in reading discs and timing actions properly. Joc’s flair for celebratory entertainment only raised the energy of both moments more.

Jumping ahead a few minutes, the Aviators received the pull with under two minutes remaining in the quarter and a 18-14 lead. Two throws in got the disc in McDougall’s hands right at the Aviators’ sideline. When the stall count reached its limit, McDougall saw Bacon cutting towards open space in the middle of the field, a couple yards ahead. Sean threw in his direction, but in his haste put an outside-in angle on the disc coupled with a considerable amount of power. The disc took off towards the opposite sideline, well above Bacon’s head. A less-seasoned pro would have turned blindly, hoped to pick the right angle of attack, gotten a late jump, and eventually watched the disc fall to the turf. Tyler is as experienced as it gets. From the moment it left McDougall’s hand, Bacon knew there was trouble. He instantly altered his course, picked the exact spot the disc was headed, put his head down for four hard steps, looked up to find the disc again, then layed out for the disc (3:20). The Aviators Gameday Twitter account (@aviatorsgameday) noted that a Tyler Bacon layout is a “visual spectacle.” The entire process is more of a “hurtling” than anything else. Arms and legs flail in a confusing array of controlled chaos. And somewhere along the way his right hand grasps the disc before the one-man exhibition tumbles back to the earth. Now three throws have transpired, and arguably the best play of the point has yet to occur. (Bacon would also have another possession-saving, body-flailing catch (4:08) in the fourth quarter, in which his feet splayed even higher than before, creating a dolphin-esque flight path through the air. The game announcers referred to it as Bacon’s second “hellacious layout.”)

Fast forward through the next two throws and a pick call that moves Daniel Landesman and the disc ten yards back. When the referee blows his whistle to begin play again, Ryan Lepore cuts deep and Daniel obliges. The throw angles in high and wide over Lepore’s right shoulder, and is quickly speeding away. Lepore notes the tiny window of opportunity and flings himself into the air (3:28). With his right hand underneath and his left hand on top, he somehow manages to sandwich the trailing edge of the disc between his palms. Five feet in the air with a less-than-vice-like grip, Lepore corkscrews his body clockwise, landing first on his right shoulder and hip, allowing him to cradle the disc on his stomach as he completed a barrel roll on the ground. 19-14 in favor of LA with less than a minute remaining in the quarter. Lepore would have another spectacular bid on a throw to the end zone, but the path of the disc and the timing of his bid resulted in landing a few inches beyond the end line. Additionally, for Los Angeles sports fans who are in the habit of calling out “Number Thirty, Todd Gurley”, you should add “Number Four, Ryan Lepore” to your lexicon. Just for the heck of it. 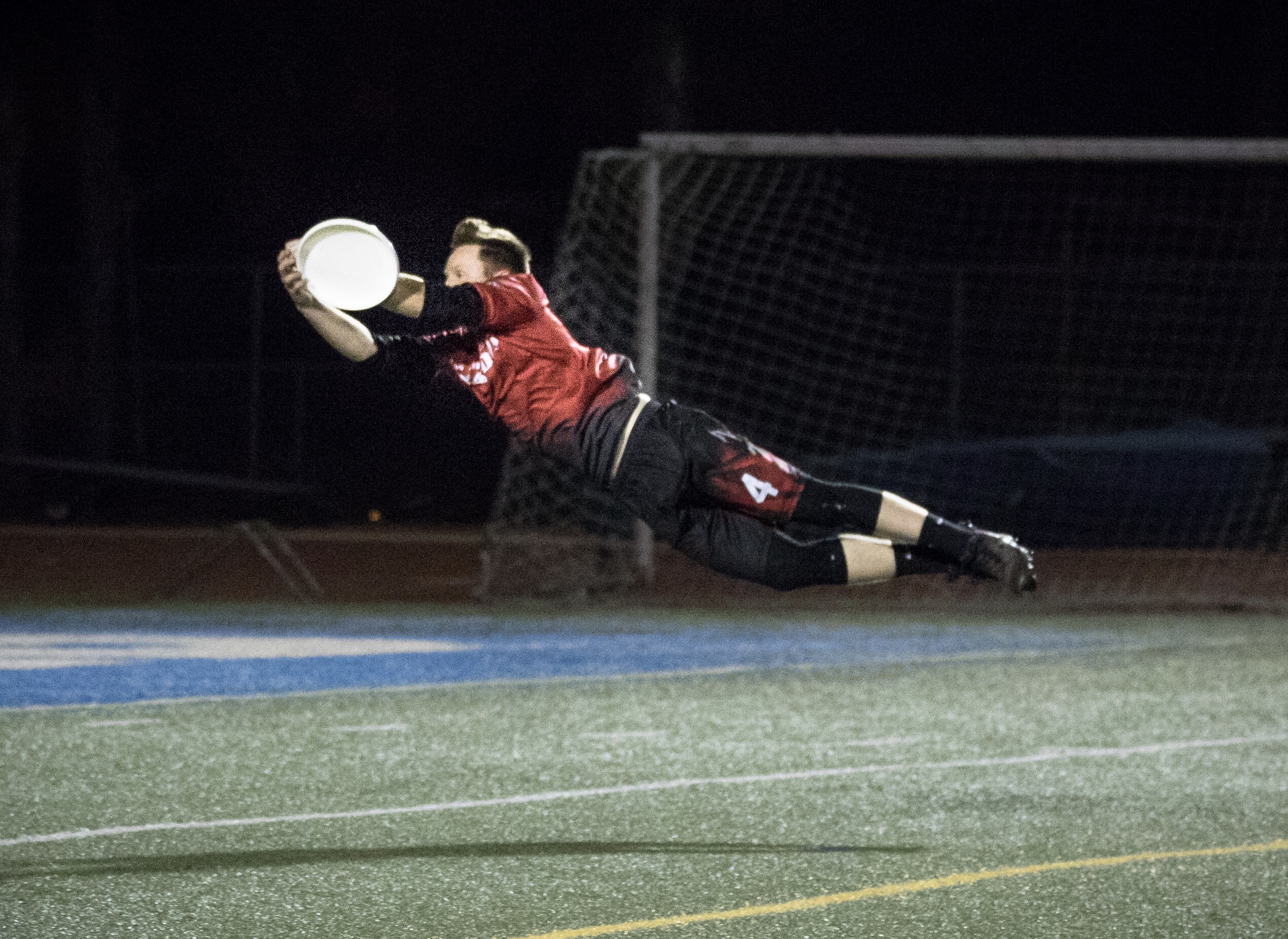 Not to be outdone, though it’s hard to be outdone when you lead the team in goals for the game (7) and the season (15), Landesman had his own absurd theatrics early in the 4th quarter. Bacon found McDougall for a 20-yard gain on an inside forehand break to the left hashmark around the attacking 43-yard line. Sean instantly turned upfield and saw open space in front of Landesman. McDougall threw his own inside forehand towards the end zone, but had quite a bit of juice on it. Similar to Lepore’s, Landesman had barely more than a split-second’s worth of a window to attack the disc in the air before it sped by him. Springing off of his right foot (the wrong foot in this situation, 3:44), Daniel used his right hand to snag the disc, fully outstretched and above shoulder height. Now in his own vulnerable position midair, Landesman managed to soften his blow with the right side of his body and use his momentum to roll and slide another five yards across the ground instead of augering himself straight into the turf. When his 18-year old, still-malleable body finally came to rest, he was congratulated first by his defender, Seattle’s Jack Brown, then by a torrent of exuberant teammates and the sweet serenade of John Denver’s “Take Me Home, Country Roads”, Daniel’s personally-chosen goal-scoring song. If you don’t yet know the lyrics to the beloved song, come out to the next home game. Landesman is sure to end up in the end zone many more times just for your auditory pleasure.

All of those were spectacular individual efforts on the “Grandiose” side of the spectrum. With six minutes remaining in the game and Seattle receiving the disc down by the score of 22-17, the Aviators managed to pull off what some might be inclined to tag as the most boring offensive possession in the history of the AUDL. There’s no way to actually quantify that, but superlatives are fun. After Zac Schakner poached off of his man to make an interception in the end zone, the tedious malaise began. A touch-by-touch summary:

Things to note about the possession:
- Before the point began, Steiner had suggested the delay tactic in the event of a turnover.
- Jimenez was seemingly unaware of that fact and only had one touch because he spent the entire possession downfield trying to score.
- Start to finish, the offensive possession by Los Angeles lasted exactly three minutes.
- It was almost all for naught when Smith’s last throw to Drum into the end zone was nearly layout blocked by a Cascades defender.

Notable quotes by the announcers along the way:
- “This is just a demoralizing point for the Cascades; they look exhausted.”
- “We don’t have a shot clock… so they could do this the rest of the game.”
- “I have never seen anything like this, in fact. They might actually do this the rest of the game.”
- “This really may be the most uneventful AUDL point I’ve ever watched.”

Taking all of that into account, the whole thing was unbelievably mesmerizing. Ultimate, especially in the AUDL, is rarely that deliberate and easy. It was the perfect storm of Seattle being desperate and physically worn down after two full games in little more than 24 hours, and the Aviators being content to play keep-away. The last two minutes of the game saw four more scores, but the final damage had already been done.

As mentioned, Daniel Landesman led the team with 7 goals and added one assist. Sean McDougall led the way with 5 assists, also tacking on one goal. The first six goals of the game were scored by six different Aviators, while the first six assists were also logged by six different players. To accentuate the spreading of wealth further, eight Aviators had multiple assists, while seven Aviators had multiple goals.

This was the second consecutive weekend the Aviators held a six-goal advantage late in the fourth quarter of victories over Seattle. The Cascades remain winless heading into their next game, at home next Saturday against the San Diego Growlers. Los Angeles looks to extend their 3-game winning streak in San Jose next week against the Spiders. LA versus San Jose is the AUDL’s Game of the Week and will be featured on Stadium.