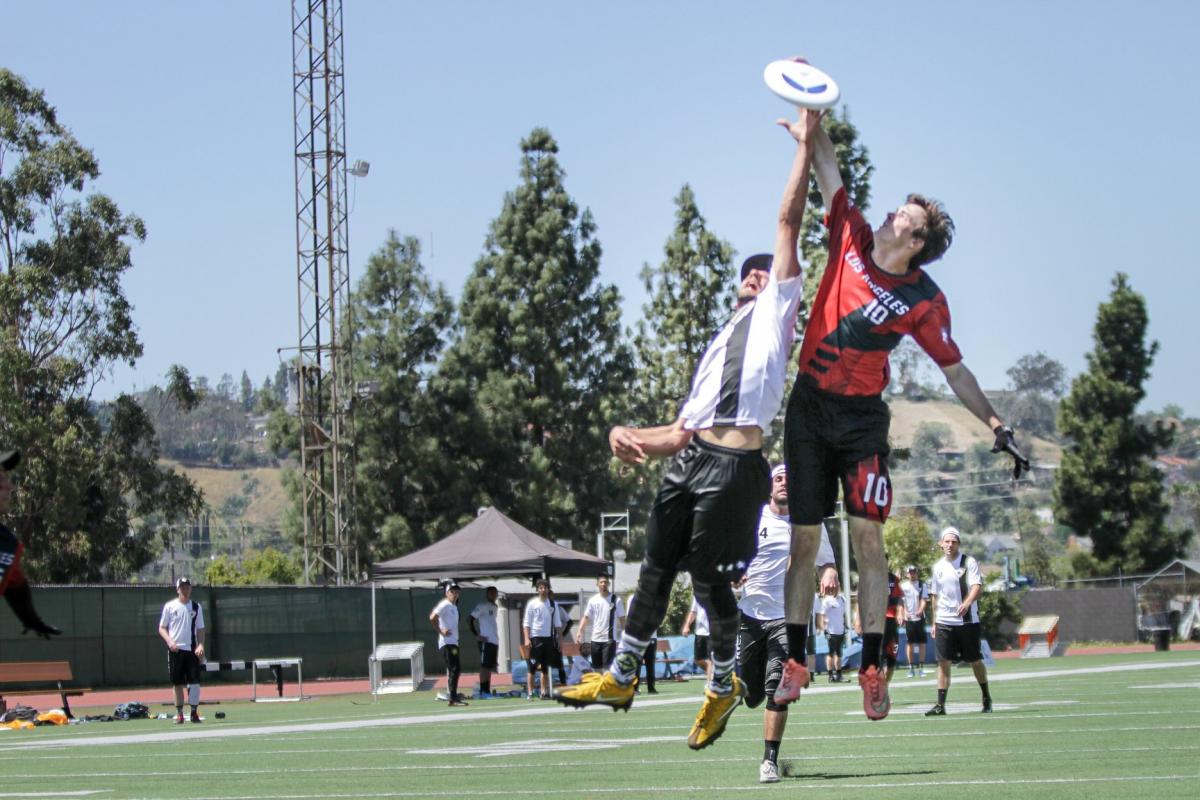 Culver City -- Fueled by an even mixture of consistent rookie contribution and dynamic veteran playmaking, the Los Angeles Aviators (1-1) defeated the San Jose Spiders (1-2), 22-18, in the Aviators’ 2019 home opener on Friday night. On the heels of a teenager in his professional debut scoring the first goal of the game for Los Angeles, and one of the most dynamic plays in the sport taking place before the first quarter ends, the tide seemed to be rolling in favor of the home team from the onset, setting the tone for an entertaining matchup.

Quick history lesson. On a June night in 1982, Henry Callahan was working at a local tavern in Boulder, Colorado. During a robbery, an armed assailant mercilessly took Callahan’s life. Henry was an outstanding pioneer of ultimate, most notably during his time in Oregon, almost single-handedly developing the entire ultimate infrastructure along the western coast of the United States. The ultimate community, devastated as it was, chose to honor Henry by naming the college player of the year award after him, in addition to a very specific statistic in gameplay. In ultimate, a Callahan occurs when a defensive player intercepts a pass in his attacking end zone, similar to an end zone fumble recovery in football. The play is rare, momentous, and emphatically celebrated. All attributes of Henry Callahan himself. In Friday night’s game, he would have been proud of the occurrence of the play that bears his name. (A more detailed account of Henry Callahan can be found at this blog post.)

After the teams combined for 11 straight offensive holds to start the game, bringing the score to a 6-5 San Jose advantage with just under two minutes remaining, Los Angeles received the pull. Player/Coach Tyler Bacon (#55) saw Sean McDougall (#10) sprinting deep and launched a forehand downfield. The disc hung in the air long enough to allow two extra defenders to root themselves under the disc along with McDougall and his own defender. Out-manned and out-positioned, McDougall was forced to watch the disc land harmlessly on the turf, though barely beyond hopeful fingers on a full-extension layout by Ryan Smith (#20). Joe Thompson picked up the disc for the Spiders and looked to his right to swing the disc to teammate Kevin Tien. Thompson hesitated and pump-faked at first, but eventually decided on that cross-field forehand as his course of action. All the while, McDougall sat a few stops off of Tien, waiting for the moment the disc started its flight. Like an African predator bounding into attack, McDougall accelerated and pounced, err, layed out to grab his prey, err, the disc. He secured the disc, landed in the end zone, and put a point on the board to tie the game, redeeming his team’s earlier turnover and keeping the Aviators on track.

Following the evenly-matched first quarter, the Aviators dominated the second quarter. Los Angeles started with an offensive hold and two breaks to go up 9-6. San Jose followed with a hold and break of their own to pull within one, 9-8. LA held, then rattled off three straight breaks to take a five-goal lead with under a minute remaining. The Aviators’ end-of-quarter woes this continued, however, as the Spiders were able to connect, Mark Philipson to Jacob Greenberg, as time expired in the first half for a halftime score of 13-9. Los Angeles’ seven goals in the quarter were scored by six different players, including the first career goal for rookie Xavier Charles (#0) making his AUDL debut. The seven associated assists were also contributed by six different players, underscoring the Aviators ability to spread the wealth and attack from all angles.

The teams exchanged goals coming out of halftime (LA break, SJ hold), leading to one of the more controversial moments of this short AUDL season. Tyler Bacon sent an arcing backhand into the end zone to Tim Beatty, who jumped up and pancaked the catch in the end zone barely out of reach of Mark Philipson’s desperate layout. One of the most hotly-debated topics in sports is the idea of celebration. What constitutes too much? Where is the line between being ecstatic for yourself and your team and being disrespectful for the other team. Baseball has its own unwritten rules that are muddled at best, completely incoherent at worst (just ask Tim Anderson of the Chicago White Sox this week). Celebrating after a touchdown in the NFL was often accompanied by a 15-yard penalty. Soccer teams all over the world run around waving their jerseys over their heads or choreograph entire routines with nary an upturned nose. Different strokes for different folks, as it were. Ultimate generally resorts to spikes of varying degrees, from the straightforward Gronk-spike type, to flinging the disc high into the air with no regard for its destination, to soaring punts. Most often, the players attempt these efforts out of range of an opposing player to avoid any question of malicious intent. In an unfortunate moment of absent-mindedness, Beatty performed otherwise.

With Philipson lying prostrate on the turf taking a moment to catch his breath, Beatty oh-so-gently placed the disc face down onto Philipson’s back. He could have easily been mistaken for placing one of his grandmother’s antique china plates down on a freshly-varnished dining table for holiday dinner. Realizing what had happened, Philipson did not rise in a jovial holiday spirit, instead picking up the disc and, in Beatty’s direction, holding the disc out while voicing his displeasure. Spiders Coach Tyler Grant was also quick to react, sprinting across the field to share his opinions of the situation with Bacon. To Beatty’s credit, he instantly turned around to abjectly acknowledge Philipson, and spent the rest of the game attempting to apologize directly to him and through teammates. He also offered an apology on the game highlight video on YouTube: “I am taking this opportunity to publicly apologize for my conduct... It was unsportsmanlike and against the (spirit of the game). It was a lapse in better judgement and I regret it. It was a good, clean bid and he did not deserve that. I took the opportunity to apologize to Mark face-to-face after the game.﻿” Much less contrition has been shown for far greater violations, and cooler heads seemed to prevail as the rest of the game was played out.

Whether fueled by that incident or finding some hidden-to-that-point strength, the Spiders responded by tallying the next three goals and four of the last five of the quarter to pull within 16-14 entering the last twelve minutes. Just last week against the Seattle Cascades, San Jose overcame a seven-goal deficit to earn an opening week victory, and they looked like they had summoned similar momentum on this evening. The Aviators had addressed this idea in their halftime talk and spent the fourth quarter stepping up to their word to keep San Jose at bay.

Los Angeles received to start the fourth, converted their offensive point, and the teams proceeded to trade the next four points to give LA the lead at 19-16 with six minutes remaining. San Jose received the pull with plenty of time and opportunity left to make a run. They worked the disc up to midfield near the Aviators sideline, with the disc in the hands of Justin Norden. After looking upfield for a couple counts and having no throwing lane open due to the mark of Eric Lissner (#43) and help from Sam Plasman (#26), Norden pivoted to the backfield looking for Steven Chang. Sprinting at the first sign of movement, Plasman cut off the short dump pass and created a turnover. After a couple throws up field, Aaron Weaver (#18) found rookie Nate Kirchhofer (#37) in the short corner of the endzone for Kirchhofer’s first career goal and the 20-16 lead. The Spiders scored to again pull within three with 3:30 remaining, but the Aviators held and got another break to push the lead to five. San Jose added another tally late before LA was able to run out the clock on their first victory of the season.

Up next, Los Angeles travels to the north to visit the Seattle Cascades (0-1) on Saturday night. First pull is scheduled for 6:00 pm PST and can be streamed live with a subscription at AUDL.tv. The first rematch between LA and the Spiders will be Saturday, May 4, in San Jose.