The Wild West never ceases to amaze, frustrate, and captivate. Since the inception of the West Division there have been 3 of 4 champions crowned from the West Division representation. And all 4 years have had the West in the Finals of Championship weekend.

The Aviators will host playoffs after capturing 1st place two weekends ago in the Bay Area double-header becoming the first team to ever win both bay area games in a single weekend. Now, the rest of the division has been battling for the second spot and we have the breakdown of how the possible 8 scenarios with the final games would play out. This weekend is a bye weekend for teams, and next weekend is a double-header for Seattle playing San Jose on Saturday night and San Francisco on Sunday afternoon. The Aviators will play away in San Diego on Saturday July 14th as well.

Based on the below grid, you can see the breakdown of possibilities and who advances based on whether San Diego wins or loses versus LA at their home game on July 14th. They advance automatically if they win, but should they lose, then they have about a 50/50 chance of still advancing based on the game outcomes between Seattle and the Bay Area teams.

To explain the tie-breaker scenarios first it is the overall win-loss record of just the teams involved in the tie-breaker. For example, San Diego is 2-1 when tied with San Francisco so they would advance in a tie there. However San Diego is 1-2 in a tiebreaker with San Jose, so San Jose would advance there. But in a 3-way tie, all three teams H2H record is considered, and San Francisco is the best of that group (and would advance) based on their 3-1 H2H advantage over San Jose bringing their overall to 4-3 in a 3-way tie, whereas San Diego is 3-3 in a 3-way tie. Since there are no additional ties to break after the head-to-head rule, we have the below outcomes* 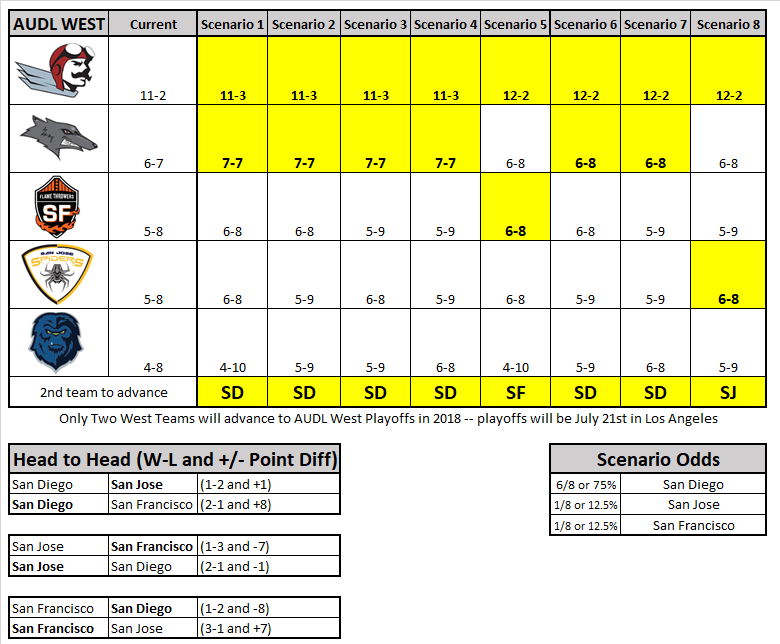 *If there were additional ties to break, the next tie-breaker is based on point differential just between teams in the tiebreaker.

Here are the official tiebreaker rules from the 2018 AUDL Operations Manual:

1. Combined records from games played only among the tied teams.

2. If step 1 separates any teams from the equal ranking, skip to step 4.

3. Total point differentials from games played only among the tied teams.

4. If two or more teams still have an equal ranking after applying the previous steps and removing any teams from the process that are no longer tied, criteria 1-3 are reapplied exclusively to the games among the teams that are still tied. This process is repeated as necessary.

5. If any teams are still tied after criteria 1-4 are fully executed, a series of coin tosses will be used to determine final seeding.

Whichever team emerges as the second representative, playoffs will be hosted in Los Angeles on Saturday night July 21st @7pm.

And you can purchase tickets to the game here: https://www.laaviators.com/shop/tickets/single-game-tickets/playoffs-july-21/