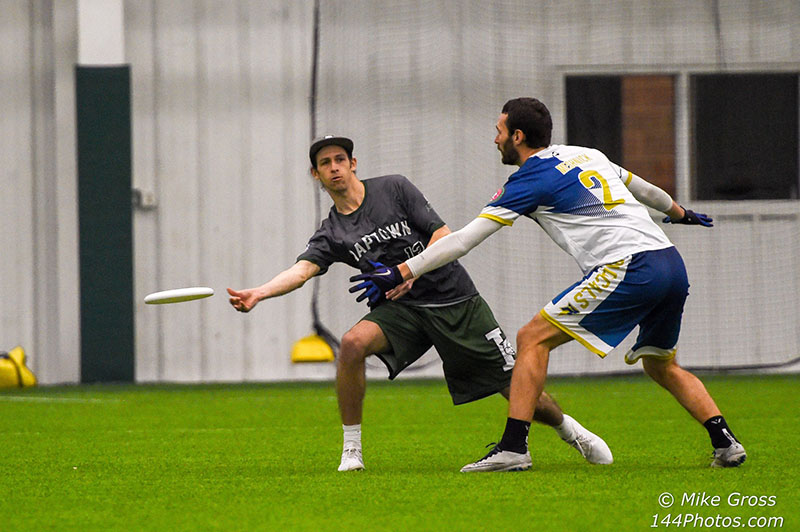 In a rematch of the previous game, Indianapolis will be traveling to Detroit to take on the Mechanix once again. Despite the loss a week ago, Detroit looked to be a much improved team over years past. The have a lot of young and energetic players who are working to turn around a team that is currently on a 27 game winless streak. That the AlleyCats walked away with the win is just one of the positives from last week, as they now also have an idea of who this team is, and it can help them game plan for the next round.

Detroit had four key players in the their opening game that allowed them to hang with an experienced Indy team. David Innis and Joe Cubitt were able to handle the disc well and continued to find Mark Whitton and Andrew Sjogren with looks in the end zone. These will obviously be the key players for the Cats to focus on this weekend in an effort to slow down the Mechanix.

After two games so far this season, the AlleyCats have seen a few struggles on the offensive side of the field, managing only an offensive productivity just under 70%. Last year they ended the regular season at 77%, a mark that stood at the top of the Midwest division. Offensive productivity is a stat that measures how often a team is scoring after receiving the pull. To put into perspective what this means for the team and the scoreboard, let us look at the number of goals the team has allowed so far. We can reasonably assume that after each of those goals, the AlleyCats would then be receiving the next pull. That would give us 44 possessions to look at. In 2018, when the team was putting up the 77%, this would have led to 34 points scored. So far this season though that would have led to only 31 points. Remember that the loss to Madison was only two points, and you can start to see where this efficiency has made an impact. While 70% is not a bad range to be for any team in the league, this team is used to better, and we can expect them to move closer to last year’s mark as the season progresses.

Your offensive leaders through two games are Keegan North and Rick Gross. Gross finds himself with eight goals, putting him on the same pace as his excellent 2018 season. North has been a key piece so far, and looks to be taking another step in his second year with the team. He already has managed to put up a +13 which is one-third of the way to his career-high total from last year in just 11 games. If the offense starts to find itself stalling at anypoint this week, look for North to try and make something happen.

Defensively there are currently six players on the team with two blocks, with a team total of 20 for the season. Last year against Detroit, Indy recorded 71 total blocks in three games, but the Mechanix look like they are focused on being much more reliable with the disc this year.

Excluding those three games, the Cats still managed 12 blocks/game last year, and even against sure handed teams expect them to return to that range by the end of the season.

Week 3 in the AUDL saw all of the Midwest teams in action, with Madison and Chicago scoring wins over the Thunderbirds and the Windchill respectively. Both games had their share of

excitement, but Chicago pulling off the one-point win over Minnesota had a great finish that was sealed by a big takeaway with only 10 seconds left. The Atlanta Hustle dropped their third straight contest and now sit at 0-3, but have only been outscored by 6 points total. They will look to right the ship against the Raleigh Flyers (2-1) this Saturday.