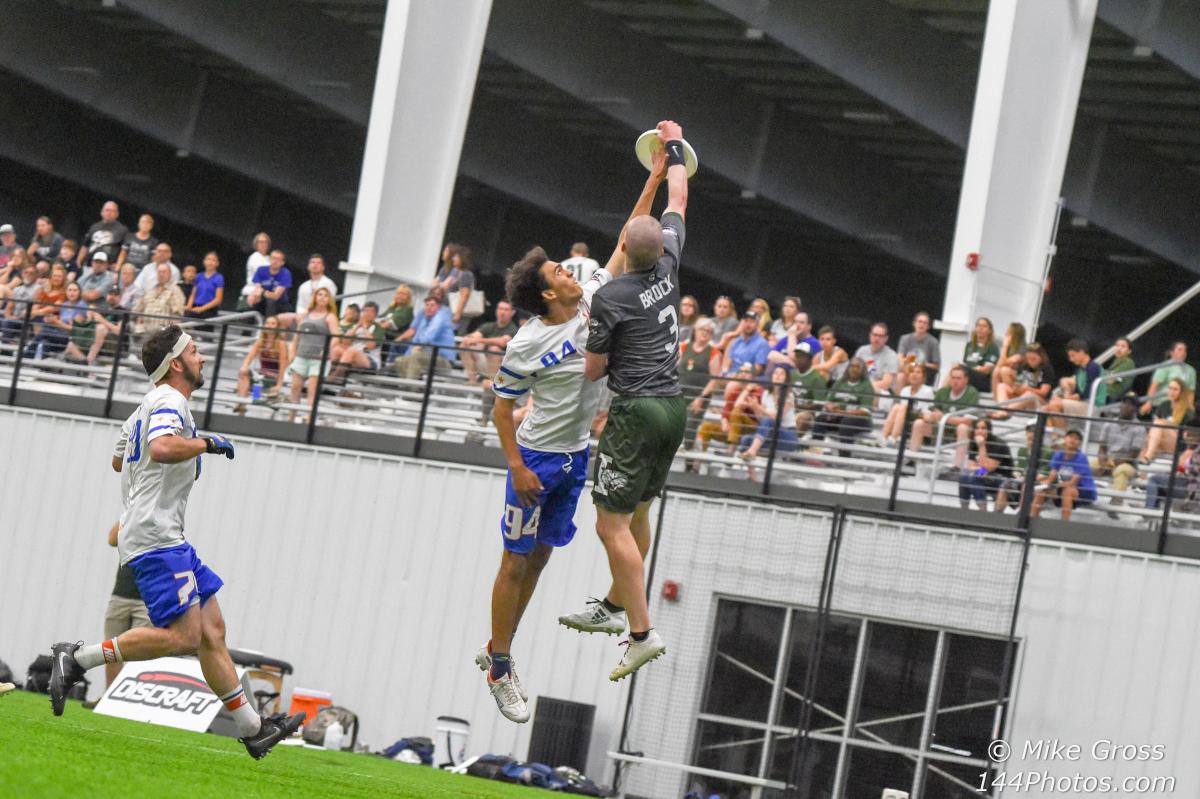 The two players who sit atop the AUDL’s leaderboard for most career goals and assists play together on the line of the same team, as they have since the inception of the league. The Indianapolis AlleyCats have taken a winding road to success in their franchise’s history, but they now stand at 7-1 and are in first place in the Midwest Division. They are poised to make the playoffs for the first time since 2014. It’s been a long road back to relevance, especially as Indianapolis was a dominant franchise in its first two years.

Though Cameron Brock and Keenan Plew sit together atop the AUDL career statistic leaderboard, they began their careers with the AlleyCats in dramatically different places.

In 2012, both Brock and Plew were among the group of Indianapolis players who tried out out to make the AlleyCats. They had played together at Ball State. Brock almost didn’t try out, thinking he wouldn’t make the team. Throughout the months-long tryouts process, he obsessively tracked his standing within the continually diminishing group.

“Every time the new list of people who were advancing [from one tryout to the next came out], I would literally make a list of players I thought I might be better than, and players I knew were definitely better than me, and players I thought were about where I was,” Brock explained. “I was constantly re-evaluating this list, and updating it, and I always had myself somewhere around the mid 30s to low 40s. I was like, I have a slight chance of making this team.”

Conversely, Brock had Plew in the top 10-15 “at least.” Both knew that it was a given that Plew would make the team. The owner at the time, Tom Held, even consulted with Plew about who should be invited to tryouts.

Of course, both players made the team, alongside some unbelievable standouts who were international faces of ultimate Frisbee at the time, including Brodie Smith, Jonathan Helton, and Joshua Shepard. Even with the talented roster around them, both Plew and Brock ended up starting on the O-Line in 2012, and Brock recalled his shock upon discovering the Cats’ trust in him.

“We went down to do a clinic at a high school in Indianapolis, trying to teach the kids some things, and Brodie was kind of running things. We went to get food afterwards, and he shared with me that day, make sure you're ready to go for the season, because you're gonna be on the starting O-Line,” Brock remembered.

“I was like, what? I went from not even thinking I was gonna be on the team, to starting on the offensive line, and I'm like, holy cow, how does this even happen?”

Brock dropped the very first pass thrown his way. The day was rainy and cold, and Brock dropped it. He was devastated, but in the second half, he caught several goals. He belonged.

Though Plew and Brock were strong players in 2012, the team’s success was perhaps more driven by the stars around them, such as Shepard, Helton, and Smith. Helton won MVP for his troubles.

Indianapolis made it to the finals in 2012, losing to the Philadelphia Spinners. Plew and Brock emerged as significant pieces on the O-Line, as Plew threw 32 assists and caught 32 goals throughout the entire regular season. Brock threw 19 assists and caught 56 goals. They were already offensive juggernauts, but 2013 would be a breakout year for both budding stars.

In 2013, the Chicago Wildfire joined the AUDL, and Shepard, Helton, and Smith all switched allegiances to Chicago. Plew and Brock took on more active leadership roles off the field and more dominant roles on it. Plew became the initiation cutter, the first player to touch the disc out of the stack, who fired the most difficult shots downfield. He racked up the assists. Brock was the primary deep threat, able to outrun and out-jump virtually any defender.

“I think we took a little bit more ownership in the franchise once Brodie and Goose left because they were captains, but they were out of town people,” remembered Plew. “We knew that we had to step up and fill those positions.”

Plew threw 58 assists and caught 61 goals, while Brock amassed an astounding 24 assists and 91 goals. Though Plew can’t recall a specific play that stood out, they all blurred into a single image of Plew unders and Brock deep strikes. The Cats lost to the Madison Radicals in the playoffs, who also beat the Wildfire in the next round. In 2014, the Radicals again beat the AlleyCats, and that would be the last time Indianapolis has made playoffs.

Regardless, Brock and Plew continued to evolve.

Brock was not a comfortable thrower in 2012. He felt immense pressure to score a huge number of goals because, “if I wasn't scoring goals,” he asked, “what was my purpose on the team?”

“There were maybe people in the community that were like, yeah, good thing you catch the disc in the endzone, cuz we wouldn't want you to catch it outside the endzone and have to throw it to someone. On one hand, I was like, that's kind of rude. On the other hand, I was like, you're not wrong,” laughed Brock.

Plew himself has had to change his game. In 2017, he was asked to become more of a pure handler for the team. He obliged, and though his goal numbers have plummeted, he’s continued to dish assists at a league-leading rate.

From 2014 to today, Plew and Brock have connected on a remarkable number of plays. Plew has thrown 227 goals in that stretch, including 85 to Brock alone; 37.4 percent of his assists have gone to Brock. Furthermore, Plew has thrown 215 total passes to Brock during that stretch, which means an absurd 39.5 percent of those passes have resulted in goals. Every ten times Plew throws to Brock on the field, the Cats tally four goals.

Parallel to the development of Plew and Brock’s games, the Cats have evolved into a force this year. Considered somewhat of an afterthought in the Midwest coming into the 2018 season, the Cats have beaten the divisional rivals Wildfire twice by a combined nine points. In the two games, Plew threw a combined 7 assists and Brock caught a combined 8 goals. The two still dominate statistically, but now the team is winning.

The career ledger, including this year, stands at 317 assists for Plew and 420 goals for Brock, both bests in the AUDL. More than those massive numbers, their teammates have evolved alongside them. Rick Gross and Travis Carpenter – both realistic MVP candidates in 2018 – have moved to the offence alongside Plew and Brock, and they help drive the Cats’ success.

“It's really, really nice having some great athletes to be able to stand on the line with you, and you look down to your left, to your right, and you'll see, if I get in trouble or I need a helping hand, I'm gonna have Travis over there to help me out, or I'm gonna have Rick Gross be able to sky three or four people if I have a bad throw,” said Plew of his talented teammates.

Beyond teammates, Plew and Brock attribute their individual successes to a variety of factors beyond solely their skills on the field. Both have played in the AUDL since its inception, and Brock has only missed one game during that stretch, while Plew has only missed three. Neither has missed a game since 2014. Both have started virtually every offensive point for their team since 2012.

“It's cool to see your name on the top of a list, but at the same time, we've been around the longest, so I feel like we wouldn't be doing the jobs if our names weren't at the top,” continued Plew.

Furthermore, Plew seems somewhat uncomfortable with the statistics: “It's really hard that they're so accessible to look at. A lot of people get hung up on them, and sometimes it's kind of frustrating that you'll notice people will sometimes play, not only for our team but for other teams, play for the stat rather than just getting the win.”

Brock is somewhat more proud of his status as AUDL career goal-leader, which makes sense considering that he didn’t even think he would make the team in 2012.

“I was a nobody,” said Brock, remembering his first year in the AUDL. “Nobody in the league knew who I was, not even the people over in Columbus knew who I was, and I'd played against some of those people before in college. They didn't know the name Cameron Brock. Why should they? Now it's not like that anymore. Now, I'm not surprising anyone anymore. People know who I am.”

Yet the two still continue to score. Though Plew is now a handler, and Brock’s skills have expanded well beyond his early goal-or-nothing prism, they still connect on a remarkable number of plays. Plew ranks third in the AUDL this year in assists, with 35 total. Brock leads the AUDL in goals, with 36. Their statistical profile hasn’t changed, but both players are focused on more important goals.

The Cats are poised to return to the playoffs for the first time since 2014. Though Brock and Plew continue to add to their position atop the AUDL statistical leaderboard, their games have expanded in ways unidentifiable through simple stats. The AlleyCats receive the most benefit.

“I'd turn in all my assists,” said Plew, “or all my goals, to get to a championship game again,”